The Hylvorans are a brother race to the Alterran and Osaran and creations of a Void god.

They look like humans but are a different species but they have steel, cyan, silver, blue, green, and Red eyes, many types of hair colors such as blond, red, brown, green, black, blue, white, and light grey, have an extra organ known as the Kiora Organ, have blue-colored blood in their veins that keeps its blue color when with and without oxygen and normal shape ears. They have 3 sub-races much like humans in real life who are known the Meadow has accents of Classical Latin (European), Swedish, Dutch and Siberian and has pale skin color, the Sandmar accents have accents of Syria and Iranian and have middle eastern skin color and the Charcoal have South African accents and black skin color. They Preferred order, stability, honesty, and balance over freedom and chaos though not in a tyrannical way that gives them a lawful good nature. They usually don’t grow beards.

Their government is the Aleph Order which is a lawful good Hereditary monarchy with a classless system. Their flag is a winged sword in a gear on a red background.

The Aleph Order have the strongest military despite not being pro militarism. A training Yzu is not a stereotypical drill instructor who shouts, yells, make soldiers do rough exercises and drills, and put soldiers through rough training courses conditions but more like a kind-hearted gym teacher or like the half-life 1 hazardous course holographic assistant which tell soldier things like “welcome to the firing range where you will learn to combat hostile forces remember to aim correctly and if miss the target the first time don’t worry it will pop up again.” And “Welcome to basic movement course where you’ll learn to run, jump and duck through obstacles if you don’t succeed the first time don’t worry just get right back up try again.” So the soldiers are not stressed out and they don’t have time courses.

The military army and navy do not fight for patriotism or conquest but rather to protect others. The military is like a mix of futuristic ww2 northern and eastern European, civil war union, Afterfall insanity soldiers, SWTOR republic and Sith empire, star wars clone wars republic, Mandalorians, first order and resistance from the squeal trilogy, and civil war Empire and Rebellion, tau and the Imperium from wh40k, half-life HEV, halo UNSC Spartans, destiny titan and warlock, Doomslayer from doom 2016 and cog armor from gears of war armors and uniforms of any combination with the army by red and white colors while the navy is identified by red and blue colors. A salute is making a fist on your chest and put it on your back similar to an imperial guard from Warhammer 40k Soulstorm.

Wardens are medieval warrior monks who protect their respected kingdoms.

These factions were fighting the Amataks.

The Silver Hylblade a silver sword that is larger than a short sword but also smaller than a long sword (age of steel).

The Mar-kyer rifle a ww2 era weapon is similar to Mosin's rifle (Age of Silver).

The AK alpha (from Warface) a modern weapon (Raven wars) before the invention of energy laser weapons.

The Hylvoran are Brave and bold Alien creatures that have the blood of a god they protect and defend other creatures from tyrants, swarms, and monsters and are much more humble about things. During their history span, none of any Hylvoran tribes declared war on another in fact there was no violence, no crimes, no wars or conflicts with other Hylvorans, no debates and no divided groups just a truly united species with peace and harmony and not in their history a Hylvoran have betrayed his species for another due to very great loyalty. They also can't have mental disorders as their mental health is perfected.

The Hylvoran have a classless system and like to read and write they don't use any currency and their government can live without an economy. They have Artificers and Elemental Mages that can create Resources of any kind, a Rejuvenator which powered by a crystal that can make weapon no longer need to reload or cooldown and has also created the SHC or (Super Hyperdrive Capacitor) device that makes a ship go without fuel and can make a spacecraft no longer have cooldowns when using its weapons. They have few forms of entertainment such as theaters, plays, novel books, and parks. Their architecture is a mix of different real-world cultures. They wear grey futuristic medieval shirts and pants with no shirt having any words or symbols on them. They have good taste in fantasy books and don't rely on corporations for their manufacturing. Their technology is more different from Humanity being more advance with vehicle transport, weapons and defense technology, biotechnology, supercomputers, architecture, agriculture, science, and clothing although they don't have things such as media, internet, networks, artificial intelligence, satellites, and teleportation. The Hylvorans are Liberal since many races such as Osarans, Alterrans, Sandmars, and Charcoal folk male and female can either join many of the branches of the military such as the Supersoldier Star Drayons, Seeker special forces, etc. Also, they can use magic to create resources and materials like power crystals that are not radioactive or harmful which makes devices powered by them very safe to put near your head. They create super soldiers through alchemy with herbs and special plants. They use the magic of earth, water, fire, air, and nature which makes food, power, crystals, materials, water, and heat.

They are very good friends with Jakuans, Vanguards, Tyrgards, Osarans, Kitsunes, Elves, Alterrans, Sykers, Cat-folk and dwarfs and are suspicious of humans due to how humans can easily follow the path of darkness and Despised Goblins because of the goblins being thieves, criminals, and savage beast and also despised Amataks due to the wars over the Hylvorans' history.

Siris the god of order a male winged being with a hooded robe and silver armor with a design of a Valkyrie, an Islamic and Diablo-like angel, the hooded angelic being from gears of war, and Siris the deathless from infinityblade3. He wields the spear known as Anduril.

The Hylvoran were created by a Void god called Zorrakai the god of balance on a planet known as Aleph through evolution he spilled his blood in the water and the microspecies absorbed it and began its evolution. The Hylvorans never give in to sins like pride, greed, malice, betrayal, envy, sloth, gluttony, wrath, and lust and does not show any forms of xenophobia, corruption, sociopathy, psychopathy, and bloodlust because they find inner peace and even quickly forgive an entire hostile race, unlike humans. First was the age of fire when a Hylvoran discovered Elemental (fire, earth, water, air, nature, and void) magic which can create resources like materials (earth) and food (water and nature). The Hylvorans begin becoming advance and spread throughout the planet. Next came the Age of Steel Where kings and feudal lords ruled, magic was discovered and the Hylvorans were fighting a race of monsters known as the Amataks a race of Creatures with 4 arms, a serpent tail for feet, and Greek-style clothing and architectures. Next came the Age of Discovery where muskets were invented and ships became a source for traveling the Hylvoran met 2 other races known as the Osarans and Alterran and became Well Trusted allies. Next came the age of Silver where more advanced weaponry was invented and A Osaran Named Anorvaska a lawful good Cheiftan of the echo tribe made concepts for the Hereditary Monarch government of Aleph called Aleph Order it was to follow 11 Virtues order, diligence, purity, faith, hope, Honor, loyalty, humility, justice, bravery, and courage. They discovered a material called Mithrite that is stronger than titanium, mithril, and adamantine which is used as a metal for armor, ship plating, weapons, and houses. The Hylvoran also created Two devices called the Rejuvenator and SHC (or Ship Hyperdrive Capacitor) after a mysterious elemental crystal called Aetherite was discovered which could be used to make a power source for energy weapons, power armor, and spacecraft laser cannons, with other special features like powering the rejuvenator so no need to reload nor wait for cooldowns and unlimited ammo. Also, it’s an energy power source with unlimited use of each crystal which means vehicles no longer need refueling and are non-radioactive which makes it a powerful and safe resource. The Amataks wanted these crystals and attacked many Hylvoran, Alterran, and Osarans Tribes (nations) Igniting the Raven wars and the Aleph Order was Quick to act as Guardians and protectors and ended the war by sieging the Amatak capitol Kyprus and made the Amataks use their magic to flee to another planet. And Last but not least the age of The stars where the Aleph Order began space travel with their technology might (which there is like from the year 5000 AD and add 60'000 years) they began to scour the galaxy for glory and met their first alien contact with the Sykers.

Hylvorans are warriors and protectors of many galaxies and planets.
Ability Score Increase. Your Strength score increases by 1, and your Dexterity score increases by 1.
Age. The lifespan of most Hylvoran can outlast every race including elves, dwarfs, and gnomes range from 18 to 5000 years. Their lifespans being largely linked to their own development of their Void God blood.
Alignment. Due to protector code they are lawful good by nature.
Size. The Hylvorans are larger than humans though still medium in stature. Your size is Medium. Males are 6' 0" while Females are 5' 7".
Speed. Your base walking speed is 30 feet.
Void Will. You gain resistance to psychic effects.
Essence of a Void God. Due to the void power embedded in your blood, soul, and mind you gain resistance to Necrotic spells.
Void Skin. You gain immunity to fire damage.
Languages. You can speak, read, and write Common (Hylvoran letters, Abberation, and one other language of your choice.
Subrace. Pale folk, Sandmar folk, and Charcoal folk

This race was made because of my passion for science fantasy, space opera, and space fantasy genre with my favorite movie series being star wars with Episode 9 (my brother cried with joy and the audience clapped so it was the best movie in 2019 second only to avengers endgame) being my favorite and my favorite video games being F.E.A.R series and Dawn of war 2 retribution some of the names for the Hylvoran are a reference to science fantasy and fantasy characters such as Reyja is a reference to Rey the character from the star wars squeal trilogy, Calem is a reference to Cal from Jedi fallen order and Athjor is a reference to Arthur Pendragon. This race I made is not affected by pride, greed, and hunger because it’s nonexistent to them since magic can make food, metal, and power. This race civilization’s design is based on the tau and imperium from wh40k, SWTOR republic and Sith empire, the republic, the resistance, the first order, the rebellion and empire from star wars, cog from gears of war, and the vanguard from Starfall Online and due to their lawful good nature they are not authoritarian, totalitarian, despotic, fascist or cruel. This is was also inspired by John Lennon's song Imagine. Note I'm planning on using the Sykers, the Hylvorans, the Osarans, and the Alterrans races for my Science Fantasy Astral Legends comic book series Evenstar. 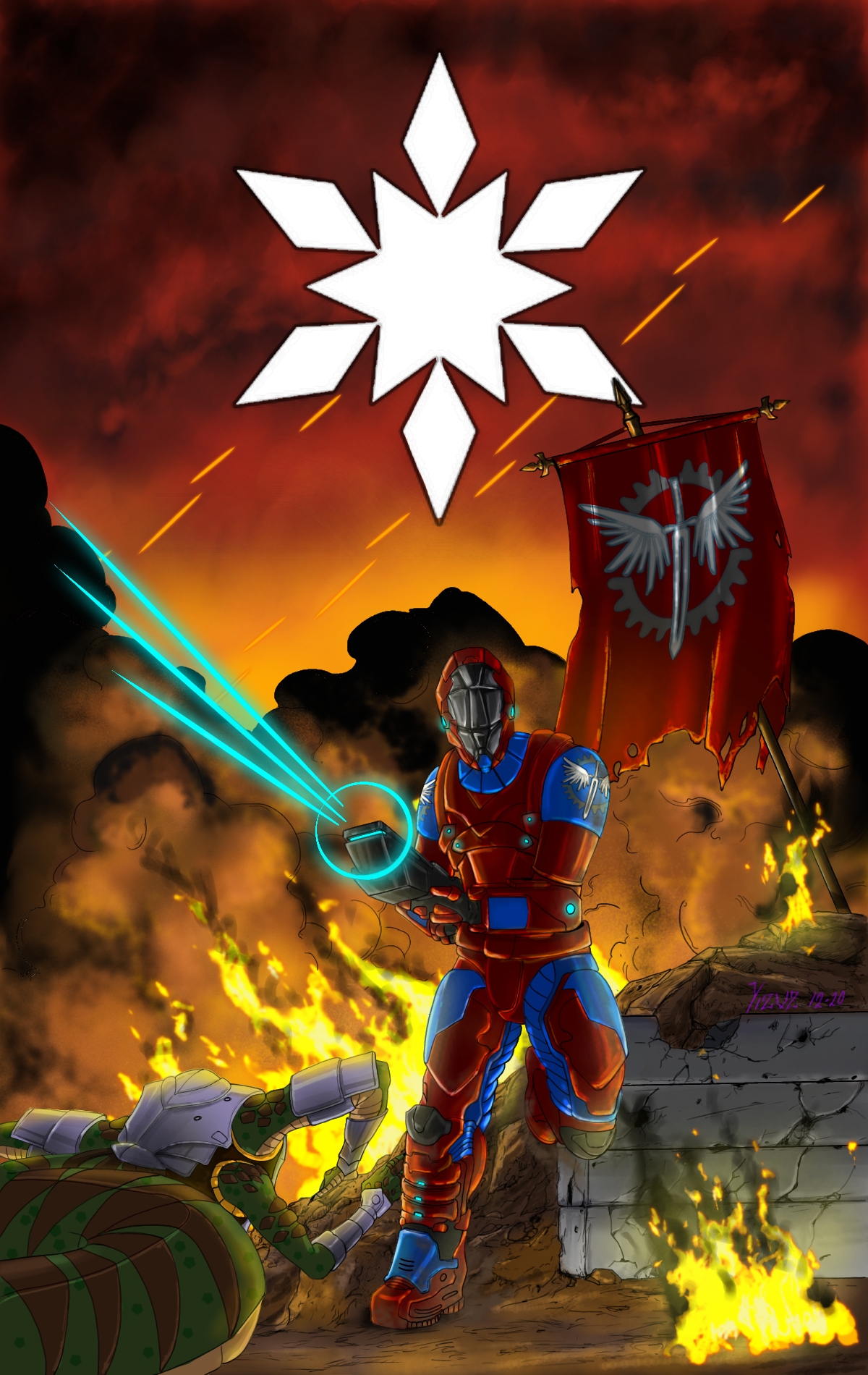 all pictures belong to their original holders.