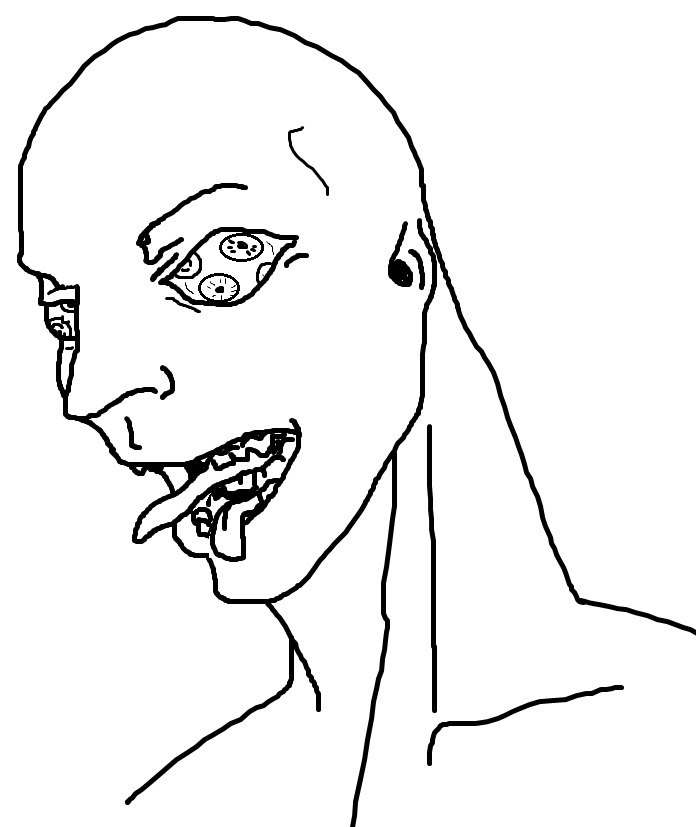 A hydris appears like a normal human at first glance. But their eyes and mouths reflect a somewhat horrific image. Within their eyes are multiple irises and pupils, like an eyeball with more than one hole for seeing. When they open their mouth, one can see that they have multiple tongues as well as a secondary mouth within their initial mouth. They also have very thick necks in comparison to normal humans. This strange and bizarre appearance is often a hindrance to a hydris' social interaction, obviously. They also lack protruding ears, instead simply having a hole. While they are not hairless, they develop less hair than normal people, and their skin on close inspection has scaly patterns.

Hydras serve as inspirations of fear and ferocity for all through time with their fearsome heads. In an attempt to channel that versatile power into a human, the hydris were created. Their strange physical abnormalities are meant to reflect the many heads a hydra has. The truly strange thing however is that a hydris also actually has a variety of mental personas like facets on a gem. While the ritual to create them has since ended, the hydris properties have propagated with their ability to reproduce as a race. For a time, they were hunted as horrific monsters, and thus they have withdrawn in the world to secluded areas.

A few small communities of hydris are known to reside in desolate mountain caves, away from any who might see them as threats. They are small in number and very secretive. Due to the way that they were hunted before, they are highly xenophobic and suspicious of any outsiders. In these communities, they eke out rather meager lives, surviving as hunters and gatherers of nature. They practice a variety of methods to make their faces change and shift, allowing them to take on a variety of personas. Few leave to go on their own, since they are raised to shun the outside world. But those who do often feel too constricted by their meager living and so seek greener pastures.

Hydris names are usually monosyllabic names that the hydris themselves chose when they become 15, which is when they mature. These names are very human, of Common.

People with many facets like heads of a hydra
Ability Score Increase. Your Constitution score increases by 2 and your Charisma score increases by 1.
Age. A hydris typically lives for about 120 years, maturing at around 15.
Alignment. From their plethora of personas, hydris can behave quite chaotically.
Size. They are rather tall compared to humans. Your size is Medium.
Speed. Your base walking speed is 30 feet.
Darkvision. You can see in dim light within 60 feet of you as if it were bright light, and in darkness as if it were dim light. You can't discern color in darkness, only shades of gray.
Hold Breath. You can hold your breath for up to an hour at a time.
Many Faces. While you do not have many heads like a hydra, you do have many faces instead. Each of these faces may have a different voice and personality. You can cast the disguise self spell once, without material components. Charisma is your spellcasting modifier for this spell. Once you cast this spell, you can't cast it again with this trait until you finish a short or long rest. When you use this version of disguise self, you can also change your voice.
Multi-Conscious. Your many personas are like different parts of the brain that do not all sleep at the same time. When you take a long rest, you appear inert, but you are not unconscious, and you can see and hear as normal.
Multi-Mind. The personas in you can help keep you alert and on track from outer influences. You have advantage on saving throws against being charmed.
Languages. Common and one exotic.