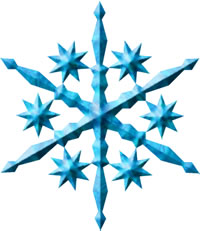 When Hroth was murdered by the God of Summer, his remains became the Ice Wolf Tundra. His people, the Frostwailers still worship him in that frozen place in Curimdar. His palace stands in Tiligia,now full of frost giants. His soul went to Mechanus,where he built an icey palace on the gears and cogs of the plane. The palace is known as The Palace of Winter. All who worship him sign a life-binding contract to him, saying that they will never consort with beings of flame.

Hroth hates the God of Summer and strongly advises his followers to slaughter creatures of fire. Those who do consort with such creatures are traitors to the God of Winter and the inevitables know what to do when a contract is broken.

Temples of Hroth,the God of Winter are usually kept cold.An altar usually stands in the center of the usually dome-shaped temple.Clerics of Hroth wear pelts over light blue-died leather garments.

Hroth resembles a tall man wearing a leather loincloth and holding a spear.His skin his blue-tinged and he has a long white beard that goes down to his navel.