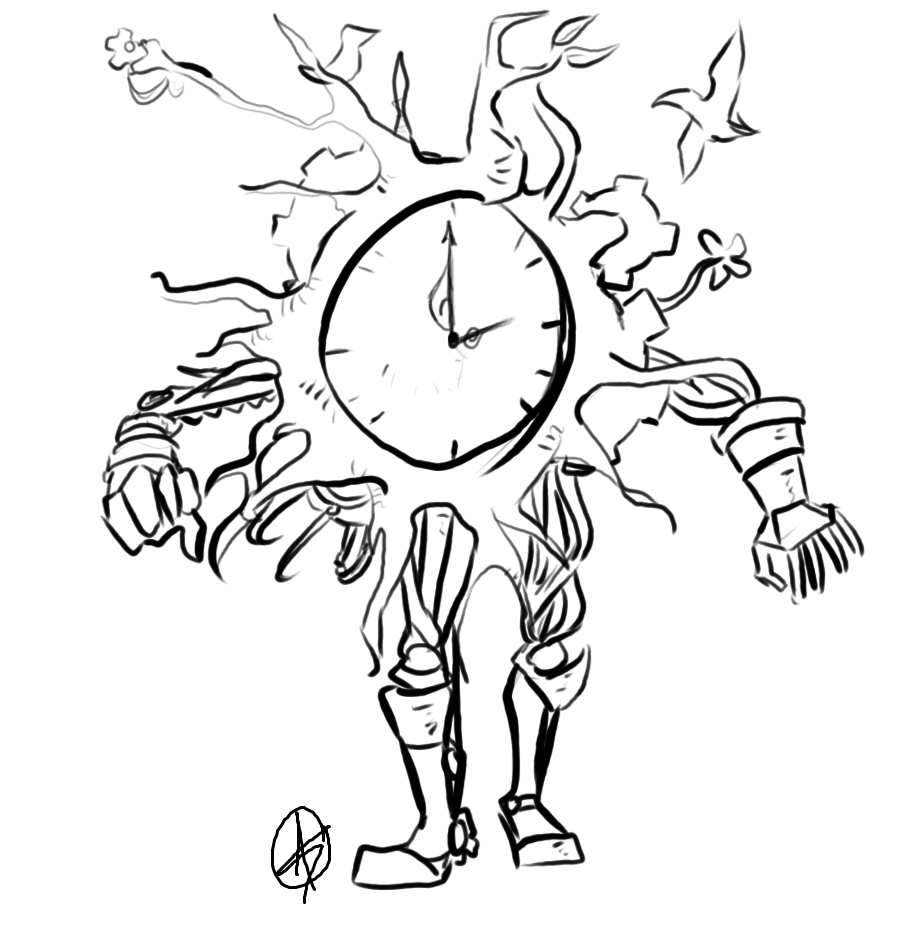 Horologermi resemble treants, but with a bit of machinery instead of plain wood and plant bodies. They usually have a clock face, hence "horo," embedded within the main body of the trunk. Their main body is like a thick tree trunk with various mechanical appendages like pipes and such wrought into the bark. Their arms are mechanical, sticking out the side of the tree body. The roots of the plant may look like overgrowth on the mechanical limbs, speckling the metal with leaves and shoots. Horologermi's metallic parts tend to be intricate and unfoundedly complex by artificial standards. It is supposedly a construct by nature, not by means of thinking men. Their legs are thick to support their heavy weights, making them a tad slow in moving.

Horologermi are believed to come from the power of nature seeping into deactivated machinery. Often times, scrap metal and such are thrown out and disposed of within nature's sanctuary. They are filled with overgrowth and such within a few years. At the end of it, some clockworks and steampunk throwaways are re-risen to be new creations by the power of the natural world. They rise up as horologermus. From that point on, they walk with a tick and a tock in their step, patrolling the trees and protecting their new home.

The horologermi are largely silent folk, communicating only with the ticks of their clocks or the grinds and creaks of their inner machine cog workings. Only about five will inhabit one forest at a time, though this can vary based on the expanse of greenery they need to cover. They are solitary, usually roaming only their designated quadrants to patrol. They will meet first to set the parameters for the day, and reconvene the next day, and so forth, working like clockwork. At night, they usually wind down a bit where they were roving. As such, their interaction with one another is minimal. Large groups of horologermi are unheard of.

People have been guided through forests by these clockwork creations. They are known to be docile, if not antisocial nearly. Their main objectives are to keep nature pristine, and so usually try and push travelers out of the forest as soon as possible. Despite their clock faces, they are not actually aware of time it seems, as their mechanisms no longer function for the purpose of even keeping chronological rhythm. They are known to be gentle with animals, supposedly, because they have a vague differentiation between what is supposed to belong in their forests and what does not.

These clock golems use ticks and tocks of the clock to address one another, though one is never really sure what they say. It is established they have no gender, however.

Mechanical beings born of nature
Ability Score Increase. Your Intelligence score increases by 2 and your Constitution score increases by 1.
Age. Horologermi have organic parts to them as well as mechanical. These will inevitably rot after five centuries or so.
Alignment. Horologermi rarely like to have attention drawn to themselves, and so usually stray towards neutral or lawful alignments.
Size. Horologermi have very little variation in terms of size, and they are almost always about six feet high. Your size is Medium.
Speed. Your base walking speed is 30 feet.
Darkvision. You can see in dim light within 60 feet of you as if it were bright light, and in darkness as if it were dim light. You can't discern color in darkness, only shades of gray.
Constructed Plant. Your creature type is considered to be both construct and plant. You can attempt to hide even when you are only lightly obscured by foliage, heavy rain, falling snow, mist, and other natural phenomena. Due to the partial organic parts of your body, you do require air, and you can benefit from healing spells like cure wounds, as well as healing potions. You are immune to spells like crown of madness or dominate person because they specifically target humanoids.
Semi-Constructed Nature. You do not require food, drink, or sleep. Your clock face prevents you from ingesting food or drink. Rather than sleeping, you enter an inactive state for 6 hours each day. You do not dream in this state; you are fully aware of your surroundings and notice approaching enemies and other events as normal. You are also resistant to poison damage.
Born of the Wild. Because you have such an intimate connection to the wild, you are proficient in the Nature skill.
Mendable. When the mending spell is cast on you, it has the following alterations: It has a casting time of 1 action. If you have 0 hit points you become stable. As part of the casting of mending the caster may expend any level of spell slot to cause you to regain a number of hit points equal to 1d8, plus their spellcasting ability modifier. For each level of the spell slot expended you regain an additional 1d8 hit points.
Languages. You can read and write in Common and Sylvan. For the verbal component of spells, you make rapid ticking sounds of your clock.