Ever had a an angel remove their head in front of your very eyes? Ever wanted to sling the dark as a divine presence? Well, this is what you're after. 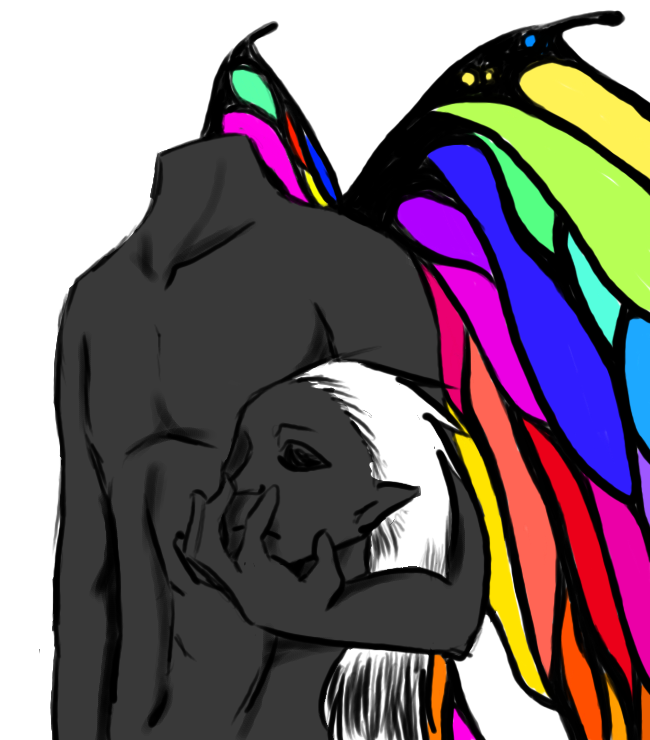 Headless angels tend to have bright colorful wings, and dark bodies. Their wings, unlike typical angel feathers, look more like that of a colorful butterfly. Headless angels have deep black eyes with slightly tinted dark irises, giving the impression of hostility or uncomfortable feeling of emptiness and omen. Their hair tends to be long, and alternates between white and black as it runs down their back. While the skin of a Headless angel depends on their choices, all start as a black shadow and may slowly lighten to an ashen grey as they age. They have slightly pointed ears.

Headless angels are members of a scattered race, created when an angel of the elements and a dullahan sired a child. This race tends to get disapproving glares from most others, not because of their heritage or race, but because of their dark, almost evil appearance. However, their pretty wings often can alleviate some of the fear their initial look elicits. These wings resulted from the mixing of angel and fey traits, making them now look apart of neither race. Also, they are rather accepted among dullahan, if not celestials.

As is traditional of the dullahans, this race tends to hide in the dark and bring death where they go. However, unlike their parents, these select few take on the role of the celestial reaper and tend to do so with their head set on their shoulders. As with the dullahans, there is one rule of the headless angels that every race knows. No matter how friendly someone may be with a headless angel, they will cower in fear when the rule is broken. This is committing the taboo of stealing the head. Anyone and anything that stands between them and their heads will perish, and the thief will suffer a death worse than the curse of a god.

Headless angels are the result of a rare union, making them a race of few and far in between. The odds of two headless angels meeting is slim, and therefore no real society has developed. They often simply wander, usually going through cycles of entry and exclusion from societies that fear them for their reputation. They do however mingle with the dullahan society as a higher class due to their mix of celestial blood. Adversely, they are shunned by other angels and races like the aasimar. The headless angels are also viewed highly by elementals due to the fact that most headless angels have better mastery of an element than most other races, though still beneath an elemental.

Reapers born of the headless and the heavenly
Ability Score Increase. Your Wisdom score increases by 2 and one score of your choice increases by 1.
Age. Headless angels mature around their thirties in body and mentally around 200 years old. They do not die of old age
Alignment. Headless angels carry their neutrality as much as they can but their angelic blood makes them a bit more tended for good.
Size. Headless angels have lither bodies than dullahan that are beautiful in form if not appearance. Your size is Medium.
Speed. Your base walking speed is 30 feet. You gain additional modes of movement from your traits.
Darkvision. You can see in dim light within 60 feet of you as if it were bright light, and in darkness as if it were dim light. You can't discern color in darkness, only shades of gray.
Fey Ancestry. You have advantage on saving throws against being charmed, and magic can’t put you to sleep.
Ominous. Your appearance strikes fear into the hearts of others. You are proficient in the Intimidation skill.
Winged. Instead of relying on a horse to summon like a dullahan, you use your wings to fly. Starting 5th level, you gain a flight speed of 40 feet. You cannot be wearing medium or heavy armor to use this speed.
Celestial Resistance. Light and dark will not harm you with the blood of an angel coursing through your veins. You are resistant to radiant damage.
Headless. Like a dullahan, your trademark is your missing head. The effects are listed below
Languages. You can speak, read, and write Common and Sylvan.

You must carry your head under one arm. If you are not carrying your head, you undergo the following effects:

When creating a Headless Angel character, you can use the following table of traits, ideals, bonds and flaws to help flesh out your character. Use these tables in addition to or in place of your background's characteristics.

Headless angels aren't dreary sticks in the mud, despite being headless.