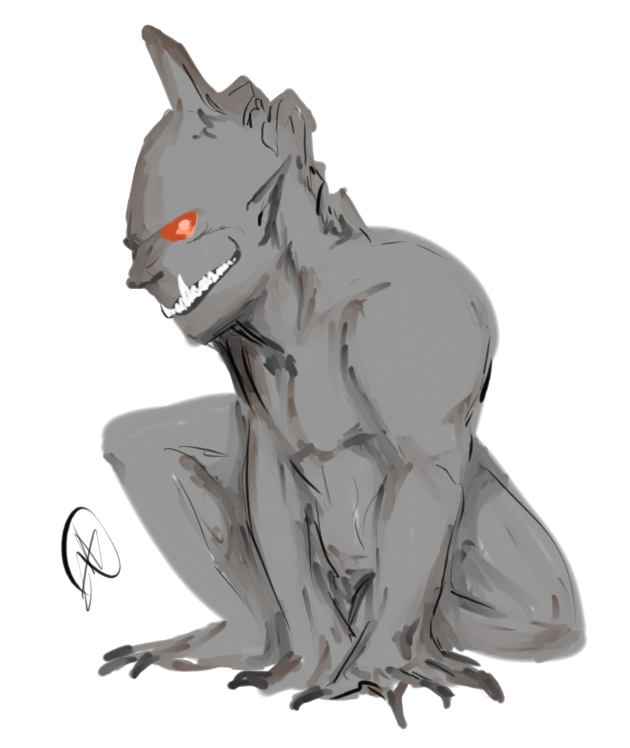 Graveurs are humanoid beings with grotesque features one may think of demons. Their general limb arrangement is humanoid. Their skin is typically gray, but ranges to hues of red, like that of a pit fiend. This skin is hard and hairless. It gathers into a bunch of hard, petrified ridges at the spine, and travels upwards to their head. This manifests into a single horn atop their forehead. Graveurs have fiery eyes that allow them to hunt in the dark, as well as claws and sharp teeth made to tear flesh. Their biology designates them as detritivores, like ghouls. However, they can eat living things, too, if they wish. In their packs, clothes are a mere joke, though they will wear what is common to their locale when blending in.

It is believed that graveurs are humans who were so depraved or desperate that they resorted to diets of flesh of the dead. This is a deviation from wendigoes, which can form when some simply commits cannibalism. Graveurs are rare, since the exact requirements for their creation are unclear. Some say they can only be born in the most horrid of conditions, where people regress to animals. Others say they can only be born through experimentation. While the exact details are unclear, graveurs over the years have multiplied their numbers as disasters and social ills plagued the land. They are known to be grave robbers. This practice spawns a curse theory of their creation: the remains of corpses they devour will return as a graveur.

While they look like wicked beasts of no brain, graveurs are actually highly intelligent and cunning, though a lot of their thought processes are alien, and they tend to speak in riddles. They congregate in hunting packs to dig up meals from cemeteries. These packs are known to be highly organized and able to use advanced tactics to distract gravekeepers and even steal young children when corpses cannot be found. Graveurs are largely nocturnal, but they are perfectly able to walk in the daylight. When they do, they wear a variety of head coverings to blend in with other humanoids more unassumingly.

Names for graveurs tend to be a string of words with meaning known to the graveur and its comrades. To strangers, it sounds like silly gibberish.

Grave robbers with tough skin
Ability Score Increase. Your Constitution score increases by 1 and another ability score of your choice increases by 2.
Age. Graveurs are known to mature at around 12 years of age. They are born into a larval form, much like an armless baby, which mature rapidly. They can live as long as 300 years.
Alignment. Given their strange and alien nature, graveurs are chaotic.
Size. Graveur height ranges between five to six feet in general. Your size is Medium.
Speed. Your base walking speed is 30 feet.
Darkvision. You can see in dim light within 60 feet of you as if it were bright light, and in darkness as if it were dim light. You can't discern color in darkness, only shades of gray.
Detritivore's Constitution. You have a strong immune system from a diet of toxic, rotting flesh. You are resistant to poison damage and you have advantage on saving throws against being poisoned.
Carrion Eater. You gain nutrition from corpses, ignoring any detriment. You may consume dead or rotting bodies and flesh to fulfill your food requirement, and you are immune to any diseases or effects that would render you poisoned when you do so.
Tough Skin. While unarmored, your AC is equal to 12 + your Dexterity modifier. You may use a shield and still gain this benefit.
Nose For Corpses. Whenever you make an Intelligence (Investigation) check related to finding corpses and dead bodies, you are considered proficient in the Investigation skill and add double your proficiency bonus to the check, instead of your normal proficiency bonus.
Languages. You can speak, read, and write in Common and one additional language of your choice.