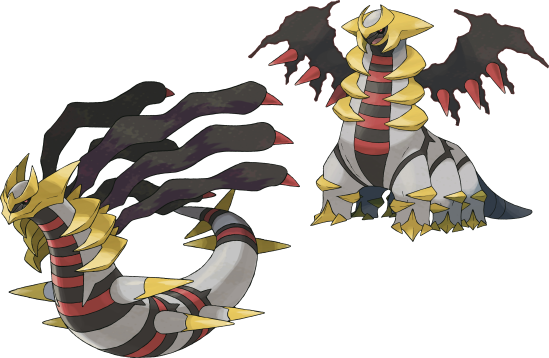 The forms of Giratina, Origin (left) and Altered (right), from Pokemon Platinum by Game Freak and Nintendo

Giratina is a rather unpopular deity in the pokemon world. His dour imagery and shadowy powers make him look innately evil. He is commonly said to have power over death, particularly the underworld. Those who were wicked will be dragged off and never be seen again by Giratina, who resides in the Reverse World, where he reigns over antimatter. He is supposedly extremely temperamental and violent. He opposed his father, Arceus, which resulted in his banishment forever to the Reverse World. He is said to pine for return to the Material Realm, to travel freely as his brothers can.

The Reverse World is said to be an opposite form of the Material World. Where there is orderly placement of space, there is no solid ground or gravity in Reverse. Space is said to fluctuate between minimal existence and nonexistence there. Time is also heavily affected as it is said to move irregularly. Those who drop in may never age or suddenly shrivel. This all depends on the fluxes between the mirror and the real world. While they are parallel and influential on each other, they never intersect. This is reflected by the pillars and shards of reflections of the real world which hover about in Reverse. If these are damaged, their real life counterparts are destroyed. Strains of pollution leak into this world when reality is imbalanced. It is up to Giratina to upkeep his own world to avoid drowning in pollution. He thus subsequently helps rewrite the imbalance in reality. Giratina is said to abhor this janitorial job cursed onto him by his imprisonment by his father.

Giratina was originally able to traverse space when using his origin form, when he takes a serpentine look, with six black ghostly streamers on its back with red spikes at the tips. His legs are reduced to spikes, and four additional golden spikes appear near the edge of its tail. While in this form, the three gold half-rings can grip objects. The horns on its head are now facing the back, and the black vertical stripe is broken into pieces and runs all the way down its body. This form allows Giratina to easily navigate the gravity-free Reverse.

When encountered with gravity, Giratina's form changed to a large gray draconic pokémon with gold half rings circling the back of its neck. His head has a gold crown-like attachment surrounding it with two large horns pointing sideways. A thick black stripe runs vertically along its front with red horizontal stripes. He has two large black ghostly wings with red tips that can resemble claws. These wings can change shape as if it's a liquid or gas. Its six legs are thick and clawed.

His brothers have orbs that enhance their powers and Giratina is no exception. The Griseous Orb is an object said to have solidified from the energy seeping from the Reverse World. It is a compact gem that resembles a four sided pointed prism. When Giratina has this orb, he can assume his origin form even when if there is gravity present.

Giratina is said to always be seeking a way into the material realms. To block all his efforts, Arceus granted Dialga and Palkia the power necessary to seal Giratina should he ever escape his house arrest. However, there is said to exist a pokemon which can create portals and thus allow Giratina to escape. Giratina searches desperately for this key to his escape.