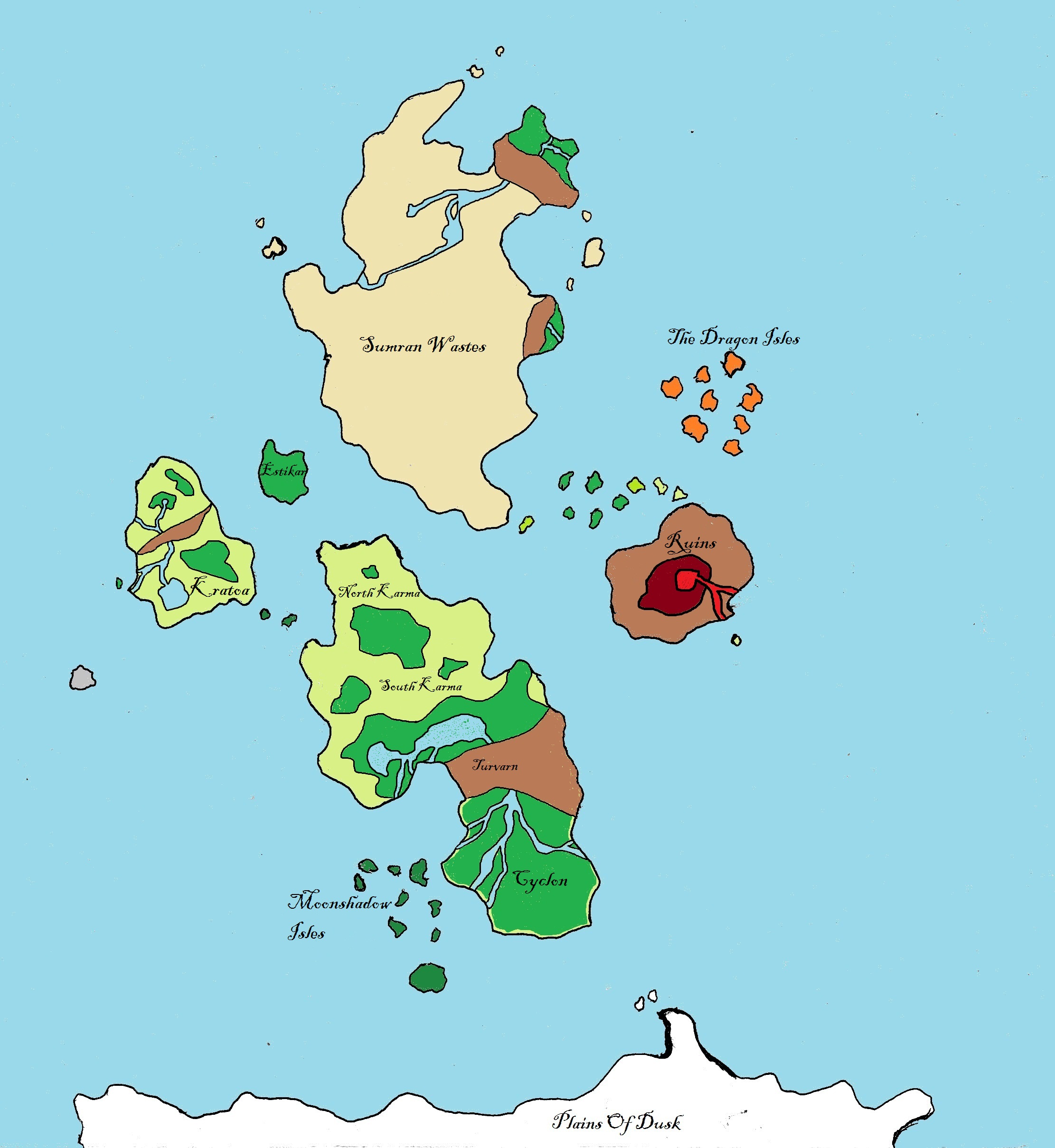 As Keran is in the overlapping of the Elemental Planes each element gains dominace periodically. Each have an effect on the World of Keran. These periods of dominance are called seasons. Each season lasts two months. The Seasons are the following

Sumra is a the largest country in the world of Keran, being of continental size. It is a giant desert with the exception of the Mountain ranges in the east and the forests beyond the mountains. It has many cities in it, with the largest being Sumrana a city on the back of a colossal golem in the image of a Tortoise.

The reason Sumra's a desert is because the Sun Rana heats it more than anywhere else. He burns the entire desert, but his focus is centred on the city of Sumrana itself. This has caused the people of Sumrana only able to go outside at night, as the surface of Sumrana at day is hot enough to set even the toughest and wettest flesh aflame.

Their are very few oasises, but those that exist are surronded by small towns which relie on its water. Bandits normally attack these town's for water. Those that resist get destroyed.

During the season of Desertbane it is basically impossible to survive in the wastes. It gets so hot that flesh dries and sets alight. Water nigh existant. The only refuge is underground or the city of Sumrana.

In Sumra the common language is Sumran.

North Karma is the homeland of the Karmainians. The land is mainly plains with small villages dotting the landscape. The people in North Karma are very wery of arcane magic (because of the war with Sumra) and as such, Binders, Warlocks, and Wizards are placed in jail (On account of Vile Practices). Sorcerers on the other hand are seen as cursed with the taint of magic.

The People are very religious and a Temple to Dylian and similiar divines can be found in nearly every town. They are the have a few cities, the largest being Crestfallen. It is known as such as the Crest of Dylian was said to have be destroyed in it when it was just a nameless hamlet.

North Karma is protected by the Karmainian Knighthood. A person can only become a knight if they have a noble title, are Karmainian, worship Dylian, and can't cast arcane magic.

The city of Vale is directly on the border between North and South Karma, it is counted as North Karma teritory.

South Karma used to be part of Karmainian Teritory. This changed in the second era when the Ranx and Lizardfolk overtook it while the Karmainians were at war.

The Ranx and the lizardfolk built new towns in the Forests and Marsh of South Karma, leaving the ones that used to be inhabited in ruins. They are now lost in time, covered in vines and soaked in water. The canopy is so dense that you can walk for a whole day without a single shiver of light touching your body or apparel.

The large lake of ShallowRock has a tricky name. Many adventures cross it think that it is shallow, when in actuality it is only shallow in the centre which used to be a hill. It is filled with black dragons and Displacer Eels.

Their is a Myth that an Assassin wanders the Marshy Forests of South Karma which makes sport of any it meets. Some say he has been cursed with the visage of a spider, others say he has the strength of a Kraken. All of these rumors say he is a ruthless killer cursed by the gods.

A Kratoa is full of many environments. Kratoa is seperated into two halves, the northern half is home to the cities of Ravensperch, and Fallow's Reach. The Southern half is home to the cities of Boneclaw, Everfall, and Newgate. These two halves are seperated by a Mountain Range. Two rivers pour from the Mountain sides. Hidden in the centre of the Mountains is a large colosseum. The collosseum is used once every two years for an event called the "Games". The Games are a group of competitions that representitives of each city compete in.

The City of Everfall is built on a cliff and the hill which descends from the cliff into the sea. On the lower side of the cliff's are deep pits. These pits are said to be cursed with the taint of undead.

The Dragon Isles are a set of islands north of the Ruins. Each island has its own terrain type. It is the homeland of the Dragons and Kobolds. The earth on the Dragon Isles is full of strange minerals making its colour orange.

The Ruins is a large burn't out wasteland. It is south of the Dragon Isles and East of Sumra. The Ruins is dominated by a large active volcano in the centre. It used to be a wild forest full of life, but once tiamus attacked the Land it was destroyed. Everything was frozen, burned, shocked, and melted by the goddess breath.

It is a now just a empty husk. Their are only two things worthy of note in the Ruins. The Volcano known as "Hellmount" and the anomalies. When the goddess destroyed the land, her divine energy was imprinted upon the Ruins. These manifest as strange anomalies, like Animated Fire and Static Whirlwinds (Many more anomalies exist).

Hellmount is currently active with a large amount of magma becoming a pool in the centre. This pool has grown so large it has overflowed and become a river in the ruins. Inside Hellmount is the city of Brimstone, the only city in all of the Ruins. Its home to Dragonborn and Kobolds. Brimstones walls are actually walls of Magma coated in magic so the heat doesn't burn the citizens, so the light doesn't blind the citizens, and so that the mamga doesn't drip down. Also inside each wall is a wall of force.

Somewhere in the Ruins is the destroyed remains of the Tower of the Ruins. Which once served as a place of refuge for mages.

Estikar is a large forest covered island. It is full of savage beasts and plants and it is a kill or be killed environment. It rains nearly everyday, causing the ground to have a strange wet texture. This water soaks into the ground and pools underground.

The forest is so large and Dynamic that it nearly impossible to map accurately. Even if their is a complete map, it will be useless in a few days.

The only city in Estikar is Arkesti, which means Life of Elves in the language of Estilex. It is a tree top city, with all the builders and architects being druids.

The Turvan is a huge set of Mountain Ranges. These mountains are so high that water freezes after a few minutes. The wind generally makes climbing these Mountains a fools task.

Dwarves and Durzites live deep inside these mountains, using the rich ore to build their cities. Because of the Dwarves and Durzites the Turvarn is riddled with maze-like tunnels. Many creatures fill these caverns which causes most travelers to try and travel the Turvarn via Valleys on the surface. These valley areas are all covered in a blanket of snow.

The Biggest City in the Mountains is the Durzite city of Ragna. Ragna utilizes Golems and similar constructs to expand on the city, without any danger to the Durzites themselves.

Magus Island is a artifical island created by the order known as the Crown of Mages. They rose the island from the deepths of the ocean and instilled the elements into the land.

It is protected by the most powerful of Mortal Magic. It isn't on any maps as it is impossible to locate.

The Plains of Dusk is a huge Tundra, in the southern most part of Keran. It is called the Plains of Dusk because when explorers from North Karma found it, it was in a state of constant night.

It is a empty wasteland of snow and ice.

Aquiter was an island built by gnomes. It floated on the sea, and was powered by a single steam generator. It was a marvel. The gnomes built a large society on this single island. That was until the war with Kobolds. The war ended the day Aquiter was destroyed. It is now broken in many parts which float strangly near each other. Each one never more than a kilometre then another.

The Ruins are filled with the inventions of the gnomish people. Many were lost and destroyed, but some surivived and are prized for their rarity.

The Moonshadow Archipelago is a group of islands west of Cyclon. It is the home of Lizardfolk and Ranx. Each island is a huge jungle. It is very humid and vines grow over everything. This is why many homes are underground.

Each island is run by a single clan and these clans trade with each other for resources without any disputes. They very rarely fight with each other beliving that because the jungle is so dangerous they need to help each other out or they will all die.

The islands are connected by underground rivers which the Lizardfolk use for trading, travel, and delivering messages. This job can only be done by Lizardfolk as Ranx have a 99% chance of death if they fall in the water.

Cyclon is an untaimable wilderness full of varied terrains. It is rich with Kylanth Cities. It is said they were masters of magic and forbid anyone from using it for evil means.

These cities are now nothing but ruins though now, as they Kylanth disappeared sometime in the second era. But none know how it happened as if it was wipped from the memory of all life by the gods.

These Ruins are full of ancient artefacts which are full of magic. But none can figure out how to use them except a small group of people known as the "Masters Of The Old Ways".

The cities are built underground allowing the surface to become wild and unkempt. It is chaotic and beautiful, as it has not been tainted by sentient life. The closest thing to sentient life in the Cyclon is the Fey. They are not truly sentient but are manifestations of Nature. They are like Avatars of the gods.

The Underdark is a huge network of caverns and tunnels which run under all of Keran. It is as deep as the sky is high and so dark light is a myth.

Only a few sentient races live in the underdark. Most of which are Aberrations. These creatures have minds so alien they have been either forced underground or want to live away from the sun.

Trillions of unknown creatures live in the largely unexplored underdark. Only about 1% of the underdark has every been seen by surface dwellers.

It has many magical hotspots through it, which for portals to other planes. The energy from these portals and the ambient magic allow fungus to grow in the deepths. This serves as food for most races down in the deepths.