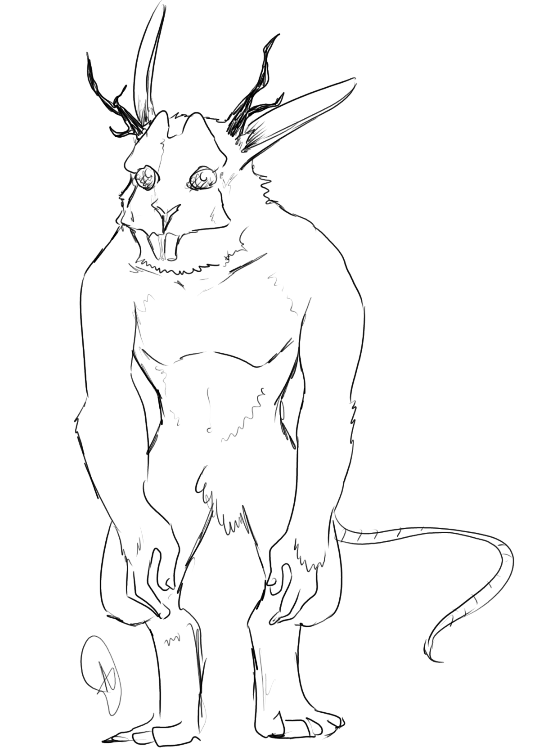 The gelruss are known as human jackalope. This is a bit misleading since jackalope are not known to have gorilla-like bodies, however. Gelruss have antlers and a bony face with two large incisors and long ears that make them appear like a strange hare-faced creature. Their body is covered in fur that ranges in color from black, brown, and even the occasional albino white. They have large, thick arms ending in human-like hands. From their rear end protrudes a rat-like tail. Their chest is notably bare of fur, much like a gorilla's bare chest. Their legs are structured like that of a rabbit's, granting them swift strides despite a stout stature.

The gelruss are recorded as ancient tribes who roamed the sands. They are indigenous to some of the most obscure deserts in the world, so though they are usually known to have existed for a long time, they are not always seen. It is said that they were an amalgam formed to guard certain sites of burial in the desert. These sites are not limited to artificial creations like cemeteries. Sometimes, a large and significant death of something like a desert predator will result in a great hole left in the local ecosystem. This is one such place where gelruss are known to form. It is not entirely clear if they are spirits of the dead or desert sprites given form through the exchange of life and matter. However, their appearance is not entirely without omen, and this has led many to be wary of they who wander the desolate sands.

The gelruss congregate in large family units that are not unlike dens of rats or mole rat colonies. They refer to one another as family so long as they are of the same race and were formed in the same area. It is believed that their origins within a location share generally the same source, drawing a close bond between all of a colony. One large onus of death can bring about as many as thirty gelruss. Within their colonies, gelruss act as hunter-scavengers. They fiercely protect the territory where they were born, which is usually some sort of gravesite. Sometimes, they infest places like tombs, acting as guardians of the sleeping kings and royal subjects and driving away treasure hunters. All gelruss within a colony are considered kindred equals, with no concept of gender, sex, or leadership. Instead, they draw their daily directions from necessity and the voice of their colony mother. This voice sometimes is what leads them out of their colonies into the big, wide world.

To the gelruss, the colony mother is the equivalent of the queen of a beehive or ant colony. It is a nebulous concept more than a concrete ruler, however. People have records gelruss speaking of the colony mother as though it were a deified ancestor from which they were born, guiding their actions. It is believed that because the gelruss come about from death, they are inextricably connected with the beyond, and perhaps communicate with the soul whose hatred they embody. It is unclear whether this soul pushes them to ill acts or is even the true identity of the colony mother. However, it is supposed that colony mothers do differ across gelruss colonies, which supports the idea that they were different disembodied entities rather than one cohesive spirit.

On spirits and death, the gelruss seem largely indifferent about death for the living. They are wholly accepting of death as something natural. However, they are also cognizant of their own strange origin. While they are not undead, their coming about is commonly equated to such. Because of this stigma, gelruss do not reject benevolent undead solely due to their unnatural un-life. While death is usually seen as an end, many gelruss have come to see it as an evolution, of which they themselves were born and remain tethered to their colony mother. While the original bunch of gelruss are formed out of death, however, living gelruss are able to procreate biologically.

Gelruss can be described as bipolar by many. They can change their moods on a dime based on what the colony mother tells them to do. Thus, one second, they can be utterly docile beings, and the next they will be ripping open some poor sap's innards. In their calm state, gelruss are highly meditative and slow. They can be described as gentle giants in most cases. However, when angered or manic, they quickly become belligerent and hard to stop. This is most common when their territory is encroached upon, though they are known to also be territorial about things other than their home. For example, if a gelruss develops a close relationship with someone, which they can, they become possessive and highly protective. While gelruss were likely born of an animus or unsavory lingering attachment, they are capable of displaying a wide variety of emotion over time, though this can take a long while to develop. Not many people have the patience nor understanding to deal with them. Thus, most gelruss stick with their own kind.

Among gelruss, names are rarely needed. They identify one another through the unspoken bond among their colony. With outsiders, they feel an other-ness which allows them to easily identify fakers. With others, gelruss might be compelled to use names, particularly by those they grow attached to. While they can procreate, gelruss lack the understanding of the differences in sex, and so they will choose the same names from a singular pool. These names are often short, yet alien, said to be an echo from their colony mother's voice.

A desert creature born of everlasting hatred
Ability Score Increase. Your Strength score increases by 2 and either your Wisdom or Charisma score increases by 1.
Age. Gelruss are formed fully mature. However, they can be born, in which they are born as whelps that mature slowly, reaching adulthood at around 20 years of age. Their bodies mature faster than their own mentality. Their lifespans are projected to be around 2000 years of age.
Alignment. While born of something as ominous as death and hate, gelruss are perfectly able to have a variety of temperaments. They can be a bit chaotic, though, flip-flopping as their colony mother voice tells them.
Size. With their gorilla-esque bodies of muscle, gelruss easily reach heights over six feet, and weigh over 200 pounds. Your size is Medium.
Speed. Your base walking speed is 30 feet.
Darkvision. You can see in dim light within 60 feet of you as if it were bright light, and in darkness as if it were dim light. You can't discern color in darkness, only shades of gray.
Colony Sense. You immediately know if there is another gelruss within 60 feet of you.
Desert Dweller. Despite your body of fur, the heat doesn't really bother you. You are immune to the effects of Extreme Heat, as detailed on page 110 of the Dungeon Master's Guide.
Gore. Your pointy antlers are natural melee weapons, which you can use to make unarmed strikes. If you hit with them, you deal piercing damage equal to ld6 + your Strength modifier, instead of the bludgeoning damage normal for an unarmed strike.
Horns Of Hate. When a creature friendly to you that you can see takes damage, you can use your reaction to make a special attack with your antlers. If the attack hits, it deals its normal damage and the target has disadvantage on its attack rolls until the end of its next turn. You can use this trait a number of times equal to your proficiency bonus, regaining use when you finish a long rest.
Powerful Build. You count as one size larger when determining your carrying capacity and the weight you can push, drag, or lift.
Languages. You can speak, read, and write Common and one other language of your choice.