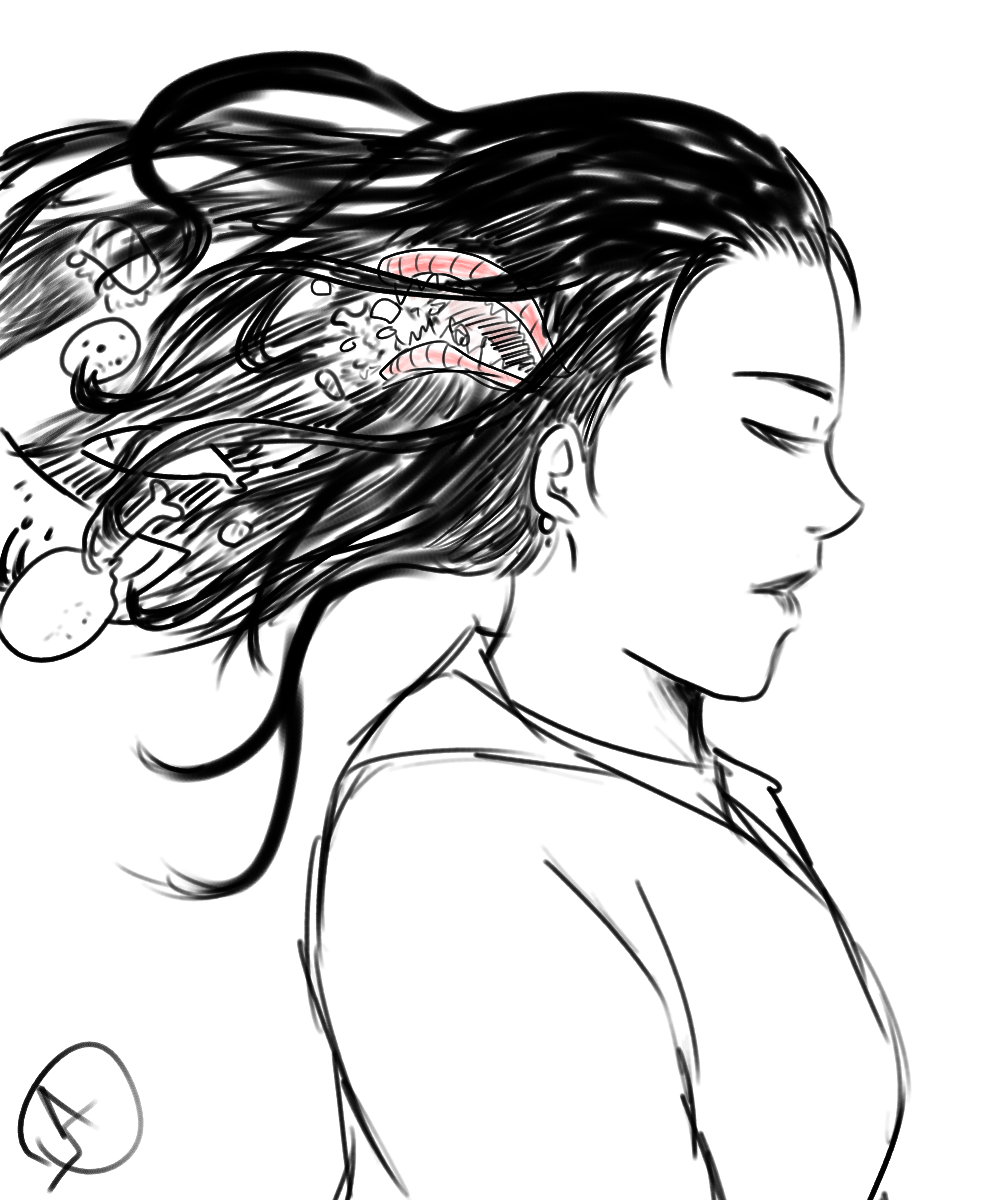 Futakuchi are creatures that, as the name translates to, have two mouths. They are commonly female and humanoid, though though there have been rare males that may exhibit these telltale symptoms. Futakuchi are not born naturally, but develop of a curse similar to lycanthropy or wendigo-ism. This affliction turns them into a different creature altogether, and is a punishment commonly afflicted on humans. A futakuchi will usually appear normal up front. However, their hair is prehensile and strong, able to bear the weight of fowl. On the back of their skull, usually hidden by hair, is a pair of lips that part to show a gaping chasm behind their faces. This is their second mouth, often lined with teeth and having a voracious appetite. This sometimes gets them confused with embodied mouthers, but they do not have nearly so many extra orifices.

The futakuchi are creatures made as a result of punishment on greed. They hail almost exclusively from Kara-Tur, having migrated across the world with other creatures like kenku. It is believed that on Kara-Tur, the sin of greed coupled with adherence to a penurious lifestyle will stricken one with the disease of futakuchi. The patient initially experiences extreme headaches and hears a second voice which demands to be fed. Eventually, an opening will form in the back of their heads and this mouth will autonomously feed itself using the hosts hair as appendages. This is a common occurrence not only among the frugal rich, but also the lower rungs of poorer castes.

Futakuchi are not regarded well by many, as they are viewed as cursed. Many end up needing to leave their dwellings due to the stigma they can bring. They do not always have control over this newfound appetite, resulting in often large stores of food consumed without their knowledge. Some futakuchi develop some degree of resonance with their other mouth, being able to speak out of it, as well as wield their hair at will. It is believed that only when their parsimony is resolved that the mouth appears sated enough to obey. However, that does not mean it will disappear.

Futakuchi are primarily wanderers after discovery. Many try to remain inconspicuous within their birth or home societies. There have been only instances of nomadic groups of futakuchi who travel in duos or trios at most. Many never reveal themselves to others and so they are ignorant in each other's company. Those who remain in other societies usually occupy the extremes of the social ladder, being either rich or poor. Futakuchi who are exiled usually try to find a way to lift this ugly curse on themselves. Others try to still the habit which bought them this plight.

Having two mouths in this case can lead to some case of two faces. The futakuchi retain their demeanor upfront. However, the second mouth is often demanding and capricious, embodying something like an instinct. Thus, the second mouth is often more blunt, though it does not mean it is truthful. It usually will spit out something like an inner thought. It is highly drawn to food and may babble of its own free will, also speaking to its host telepathically. This can make futakuchi unbearable in conversations, with a constant third wheel. Futakuchi who have tamed this second mouth can cleverly disguise the mouth often or hide it until needed, allowing them to cast spells verbally even when one mouth is unusable.

Futakuchi hail mainly from the Kara-Tur island nation of Wa, being the minority that live among hengeyokai. Their names take from the culture there, which is Wa-an. This tongue is similar to the language of Koryo and Kozakuran, but uses some script from Shou, all descended from the Han language.

Two-mouthed people created of a curse
Ability Score Increase. Your Charisma score increases by 2 and one other ability score of your choice increases by 1.
Age. Futakuchi live similar, if not shorter lifespans than humans due to the effect the second mouth can have on their physiology. They live to be about 100 years old usually.
Alignment. Like humans, futakuchi have a variety of alignments. They tend to be selfish, however.
Size. Futakuchi vary widely in height and build, from barely 5 feet to well over 6 feet tall, like humans. Your size is Medium.
Speed. Your base walking speed is 30 feet.
Two Mouths. Your second mouth is a viable source of speech. It is also often hidden. You have advantage in checks involving performing ventriloquism. You can use this second mouth to fulfill the verbal components of spells.
Prehensile Hair. Your hair is very pliable and can be used to get food among other things. It can carry weights of up to 10 pounds, as well as perform simple tasks like opening doors and jars. It cannot attack, carry weapons or shields.
Frugal Nature. It's not a crime to be a bit of a penny pincher. Whenever you make a Charisma (Persuasion) check related to haggling, you are considered proficient in the Persuasion skill and add double your proficiency bonus to the check, instead of your normal proficiency bonus
Inner Merchant. Your thrift lets you sniff out the best bargains by knowing the worth. You have advantage in Intelligence (Investigation) checks related to figuring out what something is worth.
Otherworldly Tongue. The second mouth on you is not necessarily connected to your own knowledge. At the end of every long rest, you can roll a d8. Depending on the result corresponding to the Second Language table, your second mouth speaks that language in addition to any languages you speak. This resets at the start of each long rest.
Languages. You can speak, read, and write Common and one other language of your choice.

When creating a futakuchi character, you can use the following table of traits, ideals, bonds and flaws to help flesh out your character. Use these tables in addition to or in place of your background's characteristics.
While it may be greed that got a futakuchi into the state they're in, they are hardly solely defined by that vice as people.