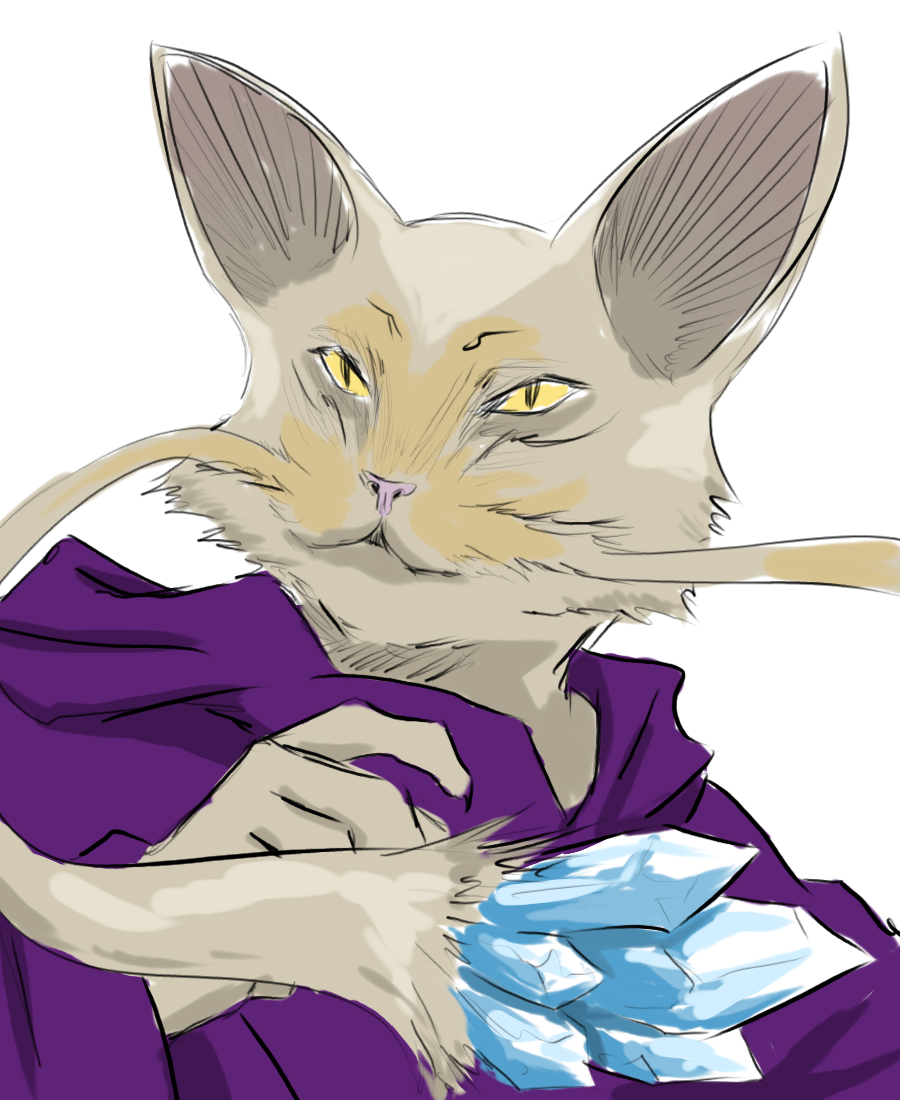 Fennecs are both vulpine and feline humanoids. They have the lush, furry tail of a fox, but it is long like a cat's. They have big ears like a fennec fox, but a shorter muzzle like a cat. They have a relatively similar body to humans, with the same bipedal limb structure. Their most notable feature is a pail of long whiskers dangling from their face. These whiskers end with crystalline deposits from minerals expelled from their body. The older a fennec is, the longer these whiskers. These are perhaps better described as feelers, as these tendril-like whiskers are actually quite muscled and can be manipulated almost like an octopus' tentacles. Their entire body is covered in fur with a wild variety of colors, including blue and yellow.

The fennecs were granted existence by their High God Farentel. They spent time building their civilization alongside the other races and in time created an empire. The fennec empire was one of the most prosperous and wealthy kingdoms, ruled by a monarch and their court. They entered many trading agreements and grew to be a well known Kingdom. The entire race was granted a natural ability to master the magics of darkness. This was a major hindrance to the other races learning to trust the fennec race. To aid in this, only a few people who passed a grueling test were granted permission to study the arts of shadow and black magic.

Eventually, a war broke out between the fennecs and other races. Whether out of fear or envy, the cause is unknown. To halt the years of suffering, the princess, Dakuvu Ikusen, agreed to marry the prince of another empire. They lived 'happily' for 3 years until Dakuvu's 18th birthday when her suspicions were confirmed. She had never trusted her husband and on her 18th birthday, he spearheaded a revolt that leads to the usurping of the fennec empire and the enslavement of the entire race. Experiments were performed on their natural link to the dark magics which led to some Fennecs who managed to escape. The princess managed to escape among them and is rumored to be building an army to retake her birthright.

Fennecs are sometimes still regarded as cultists of darkness and even slaves by some societies. They are thus highly secretive of where they dwell, and their little hidden communities are situated far from other civilizations. It is believed Davuku still rules over them. None dare return to their original land until the day they become a free people once more. In their own circles, the practice of their birthright magic is now much more common, in preparation for a fight. Fennec society is very harsh, now having been thrown into disarray and isolation from their customs. Young fennecs are rigorously trained to be suspicious of any non-fennec, and their regimens are very strict. Thus, any fennecs out in society tend to be furtive and shifty, never fully trusting others not their own.

The names of Fennec are Sylvan in nature, but they are also well versed in Undercommon.

Long whiskered users of dark magic
Ability Score Increase. Your Charisma score increases by 2, and one other score of your choice increases by 1.
Age. Fennecs have an average lifespan of 170 years. They mature early at around 13.
Alignment. Having been betrayed and enslaved, fennecs see the world as a battleground. They retaliate with equally chaotic behavior.
Size. Fennec sizes are on the shorter end. Your size is Medium.
Speed. The Fennec's base speed is 30 feet.
Darkvision. You can see in dim light within 60 feet of you as if it were bright light, and in darkness as if it were dim light. You can't discern color in darkness, only shades of gray.
Lashing Whisker. Fennec whiskers are like whips with the crystal edge at the end. Your whiskers are considered natural weapons, with which you can make unarmed strikes. If you hit with it, it deals slashing damage equal to 1d4 + your Dexterity modifier and your reach for it is 5 feet greater than normal.
Dark Magics. You have innate magic asleep in your blood. You can cast the bane spell at its lowest level, without material components once. Starting at 3rd level, you can cast the shadow blade spell at its lowest level, without material components once. Once you cast either spell, you can't cast it again with this trait until you finish a long rest.
Suspicion. You have learned to be highly critical of others and observe for those who may betray you. You are proficient in the Insight skill.
Hunted Prey. As you fear for your life coming from a common slave race, you have tactics to evade those who may wish to subjugate you. When in an urban environment, you have advantage on Dexterity (Stealth) checks.
Languages. You can speak, read and write in Common.