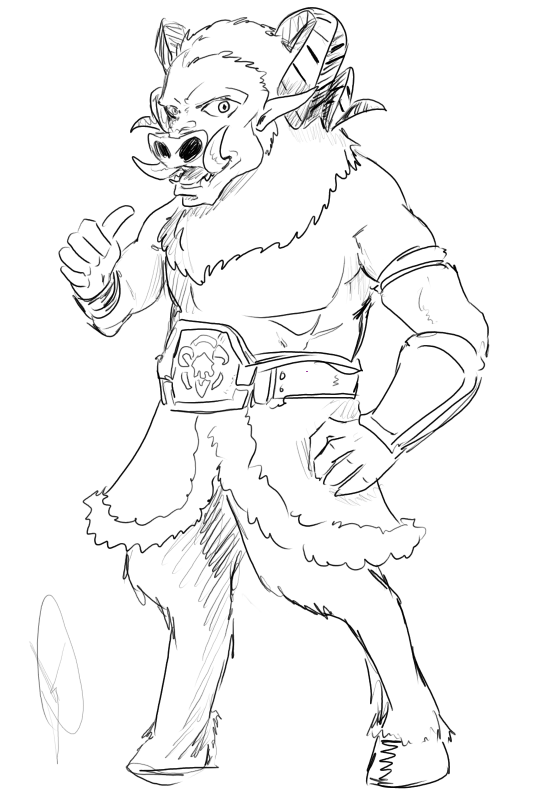 The faenur are strange humanoids with porcine and deerlike features. They typically grow a fringed mane around their face, and their skin ranges from slippery to scaly. This skin can be a range of colors, from navy blue to lime green. Their faces look human partially, but they have diamond pupil eyes and a large snout with flared nostrils smack-dab in the middle, like that of a pig. Males usually have accompanying tusks. Faenur also have pointed ears and a pair of ram horns at the back of their head. This gives them a bizarre and chimerical appearance from the shoulders up. Their horns are said to be able to detect a person's true nature. The rest of their body is fairly less confusing. Their legs are covered in fur the same color as their scales, and they are hooved like a satyrs. Most faenur also have a tufted tail, though some can be born without it.

Faenur originate from forests of great magic, where the primal essence of nature was powerfully infused with arcane power. This stimulates a change in the resident animals, making them undergo rapid changes. This chaotic evolution resulted in a variety of life forms, the faenur being only one of them. The process is rather unpredictable, and has led to the extinction of some while others, like the faenur, made the best of their new forms and thrived. The change in their being was not limited to their bodies, and is believed to have accelerated their sentience to that of a human level.

If you ask a faenur though, they will tell you their people were once a vain group. Their current appearance is a punishment from divinity for their pride and superficial values. This legend is common among their circles, though it is unsaid what race they were prior. It is assumedly a race physically similar to that of an elf.

With the legend of their origin, faenur constructed a society based on substance rather than veneers. Their villages are usually bare but sturdy, lacking too much frivolous décor. those who wear adornments are those who have proven their worth in competitions, of which there are many. Within the thick forests where faenur live, their villages have a variety of contests in various fields, from the arts to mathematics. Only the champions of these contests are allowed to wear adorning jewelry and such, having proved their worth was not only skin deep. As these rituals are like rites in a way, cheating in these processes is taboo and could garner one a sentence of exile from the council of leaders. These leaders are usually those who passed contests of intelligence, wisdom, and leadership. Given the wide array of contests, it suffices to say that faenur have a very diverse society of interests.

Most faenur are heavily focused on trust based on honesty. They are taught from young ages to discern truth and the true natures of other beings. It is said that, with the loss of their former beauty, they gained enlightenment. Faenur are candid people who try their best and know their limits. They often expect this of others, and end up disappointed. Nonetheless, if a person is earnest and persistent, a faenur will find a decent friend in them. However, faenur do not take lightly to acts of lies and betrayal. Such things are liable to set them into a mad rage.

Faenur have first names given to them at birth from their parents. If they become a champion of a contest, they are allowed to choose a last name for themselves, as a sort of title. Male names usually end with -ar, while females end with -ra.

You are a race cursed for your vanity
Ability Score Increase. Your Constitution score increases by 2 and one other ability score of your choice increases by 1.
Age. Faenur live for about 70 years on average.
Alignment. Their dedication to candor usually makes them good. Some deviate from this path however, seeing it as hopeless or unrealistic.
Size. The typical faenur chimerical body is not built very tall, but more stocky. Your size is Medium.
Speed. Your base walking speed is 30 feet.
Above the Cover. The shallow concept of initial impressions does not fool you. You have advantage on saving throws against being charmed.
Substance Dowser. You were trained to uncover the true natures of those around you. As an action, you can concentrate as though casting a spell for 1 minute. Choose a creature within 30 feet of you. At the end of the minute, you learn the creature's alignment. At the DM's option, you might also realize you know a piece of the creature's personality traits, if it has any.
Stout Body. Your hit point maximum increases by 1, and it increases by 1 every time you gain a level.
Charge Leap. Whenever you make a long jump, you can roll a d8 and add the number to the number of feet you cover, even when making a standing jump. This extra distance costs movement as normal.
Contest Trait. You trained to be a champion in some area of expertise. You are proficient in either one skill or one tool kit of your choice.
Languages. You can speak, read, and write Common and one other language of your choice.