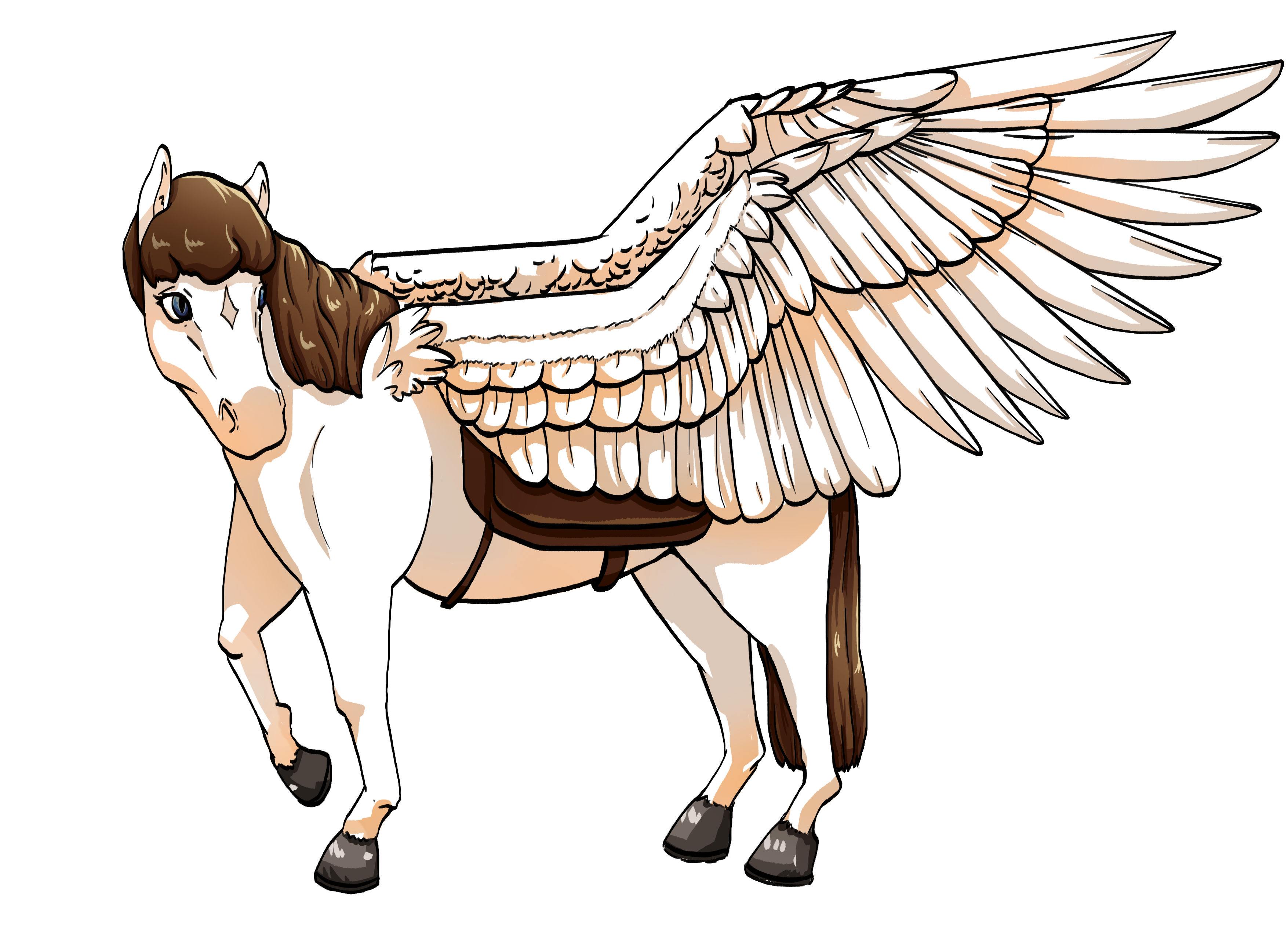 An equestrian looks exactly like a real pony, as that is what they are. The only difference is that pegasi have wings, while unicorns have horns. Beyond these features, and the possible addition of their destiny mark, they look no different than a pony.

It was a dark and dreary day that day. Dark clouds of eldritch energy covered the sky. A small herd of wild ponies, no more than twenty or thirty, ran freely across the land. The ponies came to an abrupt halt when the ground began to shudder and shake. They whinnied and tried to flee, but wherever the turned, the ground rose up around them.

Soon, the clouds began to pour down rain, slowly flooding the new valley that had been created. The ponies kicked and galloped, trying to find a way to escape the imminent drowning, but there was no escape to be had. As the water filled above the heads of the ponies, glowing ruby eyes appeared beneath them.

With this new sense of intellect, some of the ponies praised Gol-Goneth, while others called these changes a curse. Those that saw it as a blessing began to think themselves the greater beings, enslaving those who did not. Soon, they even began to enslave ponies and horses that did not have this intellect.

Now there were three races: the equus who had no wings or horn, the unicorns that had a horn, and the pegasi who had wings. While they shared no relation to the celestial unicorns or pegasi, the other races referred to them by those names, and so the names remained.

The equus believed the way to live was to live off the earth as they always had, but the unicorns - masters of magic - believed living off magic was the correct way to go. The pegasi - masters of the sky - preferred living in the tall mountains and the clouds.

The pegasi soon found that growing food in the clouds and cold mountains was an impossible task, but that they could control the clouds, allowing for some control over the weather. So, they turned to the equus for food, but the equus refused. As punishment, the pegasi prevented rain from collecting in the equus lands, soon turning them dry and barren.

While the equus and pegasi fought for years, the unicorns waited and watched. To them, the pursuit of magic was more important than any other venture. They experimented with every type of magic from simple arcane spells to complex eldritch magics. Unfortunately, this brought about its own ruin when their spells began to interfere with the pegasi's weather manipulation, throwing the seasons into chaos.

The equus blamed the pegasi for this chaos, but the pegasi insisted it was the unicorns, who promptly denied involvement. In a closed scenario, this may have been only an issue for the ponies, but alas, the equus had taken residence with many other races, and this threatened their kingdoms as well.

At long last, one unicorn grew tired of this chaos and bickering. Using her powerful magic, she crafted a magical heart of diamond. With its power, the chaotic magic the unicorns had unleashed subsided. Melody, as she called herself, now demanded the ponies follow her command, lest she unleash the full power of the equestrian Heart, destroying them all.

Melody constructed Harmony Castle atop a mountain, where the Equestrian Heart would remain, guarded by Melody's strongest and most reliable.

As for the ponies that were now forced to follow her word, they were given the name of equestrians. To ensure no further trouble, Melody taught her people three virtues: unity, duty, and destiny. Faltering at even one would bring great ruin to the new Equestrian Empire. Unity would make her people work together. Duty would ensure that each pony did what was required of them, thus keeping their unity in check. Destiny was the most important virtue, and if a pony did not seek theirs out, they were considered the lowest of Melody's people.

When Melody took control of the equestrians, she tore down the religions and beliefs that had previously been established. Instead of the equestrians being a race of chaotic creatures, Melody led them to be orderly. She created law amongst them and taught them three virtues: the virtues of unity, duty, and destiny. Ever since then, equestrian society has held onto these virtues.

The first virtue, unity, brought the equestrians together, uniting the three races into a single group. While much has attempted to tear apart this unity, every moment of history has only strengthened this bond of unity amongst the equestrians. Equestrians have not known murder or strong crime amongst their race in centuries because of their unity.

The final virtue, destiny, is the most important thing to an equestrian. Some equestrian have even gained, what they refer to as, a "Destiny Mark". This destiny mark depicts their destiny, and to an equestrian there is no higher honor than following that destiny.

Equestrians tend to name their children after the destinies they believe they will have. It is not uncommon for an equestrian to change their name after they have discovered their destiny so as to make it match up. Equestrians have no last names, but may have a family name that encompasses their family for generations.
Stallion (Male) Names: Dark Starlight, Little Snow, Moonshadow Moon, Onyx Justice, Sapphire Twister, Swift Bolt, Thunder Spark, Yellow Armor
Mare (Female) Names: Amethyst Flower, Bubblegum, Electric Harmony, Lillypad Cupcake, Maia Starlight, Moon Petal, Phantasia, River Moon, Sweetie Rain, Water Lilly

A race of sentient ponies granted their sentience by one of the Eldritch Gods.
Ability Score Increase. Your Constitution score increases by 1.
Age. Equestrians live much longer then their less-intelligent horse siblings. They live about as long as the average human does, though they mature much faster, having reached adulthood at the age of 12.
Alignment. Equestrians can be any alignment, but they tend to be more good natured. They tend to have a strong passion for harmony and is why so few wars have occurred with them as part of them.
Size. Equestrians are roughly about 5 feet tall from head to hoof. They're also about 4-5 feet long from nose to tail. The average equus always weighs around 650 pounds. Your size is Medium.
Speed. Your base walking speed is 35 feet.
Hooved. Your hooves are weapons with which you are proficient. A hit with your hoof deals 1d6 bludgeoning damage.
Special Talent. Choose one skill or tool proficiency granted to you by your class. Once, you can add a 1d6 to an ability check when you use that skill or tool proficiency. You regain the use of this feature when you finish a long rest.
Equine Build. You count as one size larger when determining your carrying capacity and the weight you can push or drag. In addition, any climb that requires hands and feet is especially difficult for you because of your hooves. When you make such a climb, each foot of movement costs you 4 extra feet, instead of the normal 1 extra foot. Finally, a Medium or smaller creature can ride on your equine back if you allow it. In such a situation, you continue to act independently, not as a controlled mount.
Hybrid Nature. You have two creature types: humanoid and beast. You can be affected by a game effect if it works on either of your creature types.
Languages. You can read, write, and speak Common and can speak with horses.
Subrace. You can choose a subrace.

Ability Score Increase. Your Strength score increases by 2.
Stout Legs. You have advantage on Strength saving throws made to avoid forced movement.
Strong Back. Treat your carrying capacity as if your Strength score was 10 points higher.
Natural Instincts. You gain proficiency in the Nature skill.

Ability Score Increase. Your Intelligence score increases by 2.
Magical Horn. You can use your horn as an arcane focus.
Cantrips. You know the light, mage hand, and prestidigitation cantrips.
Unicorn Horn Strike. Your horn is a weapon with which you are proficient. It deals 1d6 piercing damage and has the finesse property.

Ability Score Increase. Your Dexterity score increases by 2.
Not As Quick On Land. Your base speed decreases to 30 feet.
Winged Beast. You have a flying speed of 50 feet. To use this speed, you can't be wearing medium or heavy armor.
Guardians of Weather. Due to a combination of magic and light bone structure, you can walk on, lay on, etc, clouds, and can move them as well.