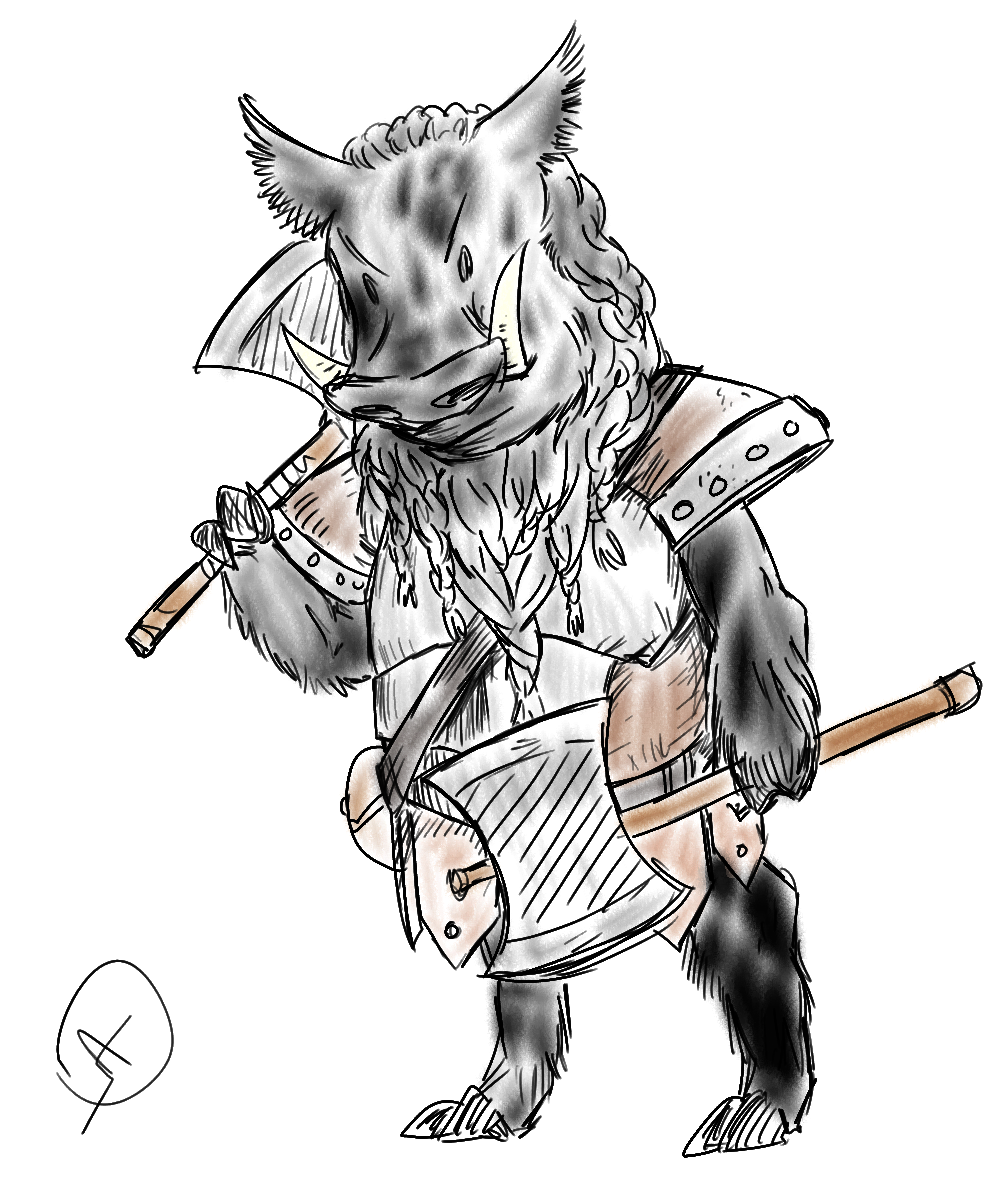 Dwarf-hogs are rotund individuals with large bellies attached to squat, powerful limbs. Their heads are porcine and boarish, with tusks. Their skin color is usually pinkish underneath all their hair, though there are some who are completely black and either can have spots of the others' color. Their eyes are usually dark like pebbles. Their fashion is more functional, serving whichever economic enterprise they dedicate themselves to whether it be work in the mines or the forests. Their clothes are made of a plain leather and they often wear simple gloves and boots with belts and straps to hold their tools.

The dwarf-hog, otherwise known as the dwog, is a creature originating from mating between hog folk and dwarves. The Iron Tusks, who are the largest and most prominent group of warriors within hog folk society, were led by the famed Captain Augustus IX and effectively ruled their civilization under the umbrella of their mercenary group. A particularly large group of dissenters rose against the captain, who retaliated with military force. This resulted in an exile of nearly a quarter of the hog folk population, who then fled to other societies in fear. Some came upon the dwarves, who saw their plight and welcomed them. This resulted in an amiable exchange of cultures, with the hog folk improving the dwarven makings of ranged weaponry and the dwarves strengthening their knowledge of armors. Over the course of this exchange, the dwogs were born.

Dwarf-hogs operate like their ancestral hog folk did, with dwarven influences. The practice of mining and smithing has been integrated into their repertoire, expanding their worker and artisan class. Many end up apprentices to dwarves in forges and stone-working, no longer set solely on the path to combat. Unlike the dwarves, however, the dwogs tend to be secular, not worshiping gods of the forges where they work. Their civilization lies closely with dwarven settlements, though some do venture out in trading caravans, or mercenary jobs. While the dwogs retain a mercenary class, they do not have nearly the same amount of power as the Iron Tusks. Instead, they developed a democratic rule among themselves to avoid repeating the mistake of their predecessors.

Dwarf-hogs combined dwarvish first names with hog folk surnames and maintained the hog folk's hereditary tradition. As such, dwarf-hogs often have first names which require guttural pronunciations while every member of a given gender shares the same surname.

Dwarf-hogs are a proud and physically powerful race descended from dwarves and hog folk.
Ability Score Increase. Your Constitution score increases by 2.
Age. Dwarf-hogs are considered young until they reach the age of 30. On average, they live about 275 years.
Alignment. Inheriting the hog folk disposition towards Neutral Good, the dwarf-hogs opt to maintain neutrality in most conflicts until their hand is forced, in which case, they will tend towards the side that keeps order and aids the village.
Size. Dwarf-hogs tend to take after their dwarven parents. Your size is Small.
Speed. The dwarf-hog's base walking speed is 25 feet. Your speed is not reduced by wearing heavy armor.
Dwarf-Hog Combat Training. Dwarf-hogs have proficiency with battleaxes, handaxes, warhammers, and all crossbows.
Dwarf-Hog Resilience. Dwarf-hogs have resistance against poison damage and have advantage on saving throws against being poisoned.
Big Nose. Dwarf-hogs have advantage on any Wisdom (Perception) checks that involve their sense of smell.
Languages. Dwarf-hogs have long forgotten their hog folk ancestors' ability to speak Sylvan. You can speak, read, and write Common and Dwarvish.
Subrace. Choose either the rock crushers or hill digger subrace.

These dwogs take more after their hog traits, boasting incredible strength. They tend to have great big tusks that can crush boulders.

Ability Score Increase. Your Strength score increases by 1.
Tusks. Your tusks are powerful natural weapons you can make unarmed strikes with. If you hit with them, they deal piercing damage equal to 1d6 + your Strength modifier.
Powerful Build. You count as one size larger when determining your carrying capacity and the weight you can push, drag, or lift.

Hill diggers taker after their dwarvish blood more. They work often as masons and miners rather than as warriors.

Ability Score Increase. Your Intelligence score increases by 1.
Stonecunning. Whenever you make an Intelligence (History) check related to the origin of stonework, they are considered proficient in the History skill and add double their proficiency bonus to the check, instead of their normal proficiency bonus.
Darkvision. You can see in dim light within 60 feet of you as if it were bright light, and in darkness as if it were dim light. You can't discern color in darkness, only shades of gray.