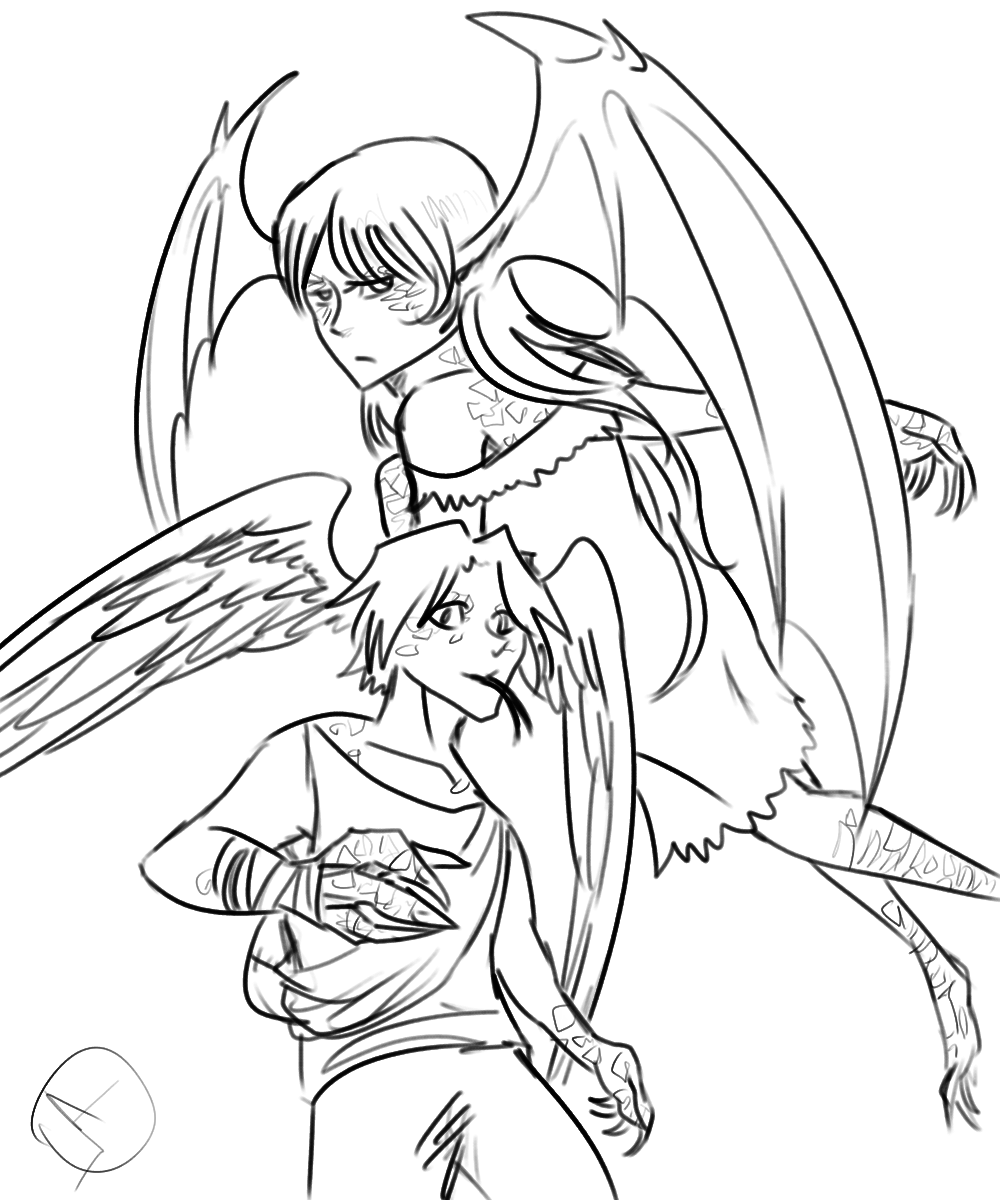 Drewkeen resemble humanoids in their stature and general appearance, save wings that sprout out of the sides of their heads in place of ears. These wings often have a span of 4 feet and can appear webbed like a bats or even feathered like a birds. Scales like that of a reptilian or even the keratinous avian sort speckle and populate parts of their face on the eyelids, as well as their arms, legs, and their backs. their fingers and toes have small claws instead of nails, though these are too minor to be called anything like talons or used as such. Their tongues are long and forked like a snake, and allow them to detect changes of temperature in the air. Female drewkeen tend to have hair down to their waist, seeing it as a sign of prestigious beauty. Males have shorter hair that only goes as far as the base of their necks.

The drewkeen are odd amalgams from the Elemental Plane of Air. They are believed to have fled the plane upon its collapse into Elemental Chaos when the Spellplague took place. Prior to this, they were a minority among the airy beings and elementals that populated that plane. They are believed to be children of Ajkadi, embodying and worshipping her ways of whimsy and nomadic adhocracy. However, following the Spellplague, she was debased from her deity status, though she still held a position of power in Toril. As such, the drewkeen faithfully followed her into this new and unknown world beyond the ether. On Toril, the drewkeen joined the Akadi Order of The Roar, dedicating themselves to preaching of their goddess. Even as Akadi left for Abeir over the Second Sundering, the drewkeen remain among her most faithful strongholds in Faerun.

Upon their initial descent into this new world, the drewkeen were aided by elves in their integration and ease of assimilation into their surroundings. As Aerdrie Faenya was an ally of Akadi, so the elves saw the drewkeen as possible allies. They maintain friendly relations to this day, even after the drewkeen parted ways with the elves to pursue a less stationary lifestyle with the winds. Some drewkeen still live among fey societies where the Seldarine are worshiped. The rest of the drewkeen pursue a lifestyle Akadi would approve of: moving place to place, from activity to the next. In their loosely founded nomadic tribes, the drewkeen travel like a band of missionaries to wherever the wind shall take them, spreading the ways of Akadi along their journey. Some drewkeen go off on their own to engage in other pursuits, seeing this exercise of will within the ways of the primordial.

Drewkeen are capricious. They are prone to starting a task and almost immediately moving on to something, resulting in a litany of unfinished chores. To them, being constrained to one place or task triggers their claustrophobia, a trait they share with the aarakocra. Like leaves in the wind, they are slaves to the push and ebb of their desires. Dwarves say they are as bad at dependability than elves, with none of the craftsmanship. Drewkeen view beings like dwarves and humans as clods bound to mundane and boring spirals of mortality, not having a vision or will to chase after what they want. They prefer to play rather than work or fight, though if they find something of interest, they will doubtless pursue it. To a drewkeen, death is another adventure to be had, as they believe they become one with winds when they die, and their spirit will be able to scatter like a gale to places they had never seen before. While they are chaotic, drewkeen look down upon acts of violence done out of spur-of-the-moment emotions.

Most drewkeen take names of the Auran tradition. However, some took Elvish names upon their coming and have thus bequeathed them to later generations as well.

Flighty beings with dumbo-esque ears
Ability Score Increase. Your Intelligence score increases by 2 and your Dexterity score increases by 1.
Age. Drewkeen reach maturity at 12 years of age and can live up to nearly 200 years.
Alignment. Most drewkeen lean towards good and chaos.
Size. Drewkeen can be anywhere from 4 to 6 feet. Your size is Medium.
Speed. Your base walking speed is 30 feet.
Flighty Whimsy. You are very elusive and can evade most counter attacks. As a bonus action, you can ready yourself to dart past obstacles and dodge attacks. Until the start of your next turn, you do not trigger any opportunity attacks.
Bird's Eye. You are proficient in the Perception skill.
Light Flight. Using your wings you can hover off of the ground, rising 5 feet vertically, and remaining airborne as part of your movement speed. While you are airborne, you are immune to most forms of difficult terrain and being knocked prone. You cannot use this trait if you are encumbered. After 1 minute, you must land to rest your wings.
Heat Sensor. As an action, you attune yourself to the environments temperature to sniff and taste out heat signatures. For 1 minute, you can essentially see through objects by sensing heat. You can see different colors, the hotter the object the more on the warm spectrum of the color wheel it will be. You must finish a long rest before using this trait again.
Languages. You can speak, read, and write Common, Elvish and Auran.