One day, a species of blind fish zipped from the bottom of the food chain to being almost exempt from it. The divine will of the gods gifted them with tremendous power. Now, a powerful race habits the Plane of Water. 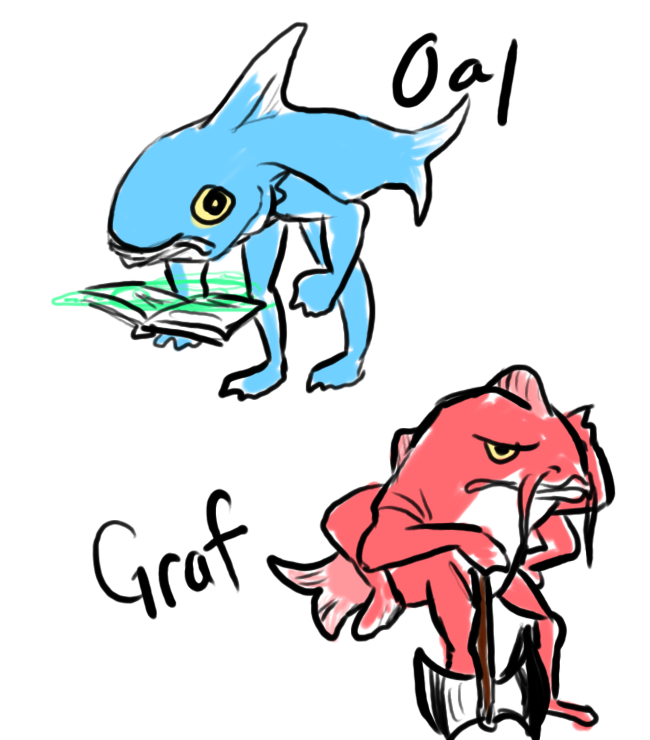 Dnilbs are eyeless bipedal fish. Surprisingly, this doesn't hinder them too much, as thousands of years ago, one appealed to the gods, who gifted them sight on a whim. Their sight actually became superior to that of the other fish, and natural selection did the rest. The dnilbs rarely leave their home in the Plane of Water. There are two types of dnilb: Oal-Dnilb, who have two arms on the side of their head along with a dorsal fin, and the Graf-Dnilb, who have a fin on the crest of their head and the back of their head, as well as four arms.

Thousands of years ago, the marine life was suffering from shark overpopulation, and the fish hit hardest were the original ancestors of the dnilbs. They literally didn't see what hit them. They couldn't, as they didn't have eyes! So one wise dnilb made an appeal to the gods. The gods didn't really care, but they granted her wish, probably on a whim. They now not only saw with new eyes, but a new power. The power made them climb the food chain, to their current state. They were given the enhanced power of sight without eyes, allowing them to sense movements around them. In addition, the magic to control water was also granted to them. They, with this newfound power, came to dominate much of the water-based world.

The god responsible is now known to be their patron, having given them immortality and minds which propelled them to almost the status of humans among animals in terms of evolutionary domination. Their newfound thought allowed them to organize into a coherent society and manage attacks on preemptive predators as well as establish higher thinking, placing them above common animals.

The dnilb society is based in cities underwater that can bubble around it for visitors that cannot breathe in water. These cities are connected by routes of information carried to and fro, similar to the messengers of Greece. They are generally organized by a hierarchy where the Oal subrace is on top of the Graf. Oal-Dnilb are the leaders and act pompous, yet surprisingly fair dealing with foreigners. Graf-Dnilb do all the physical work, and are generally very negative, given their status. However, all dnilb have the capability to be thinking, participatory citizens and stay cohesive, though there is the occasional grumble.

When a dnilb deviates from the rules, there's one punishment. The rule-breaker is sent through a portal to another realm. No goodbyes. No possessions. Just gone. This kind of exile is viewed as the ultimate punishment, estranged from one's own community. Given the hardiness of denizens of the Plane, the exiled likely survive the expulsion and wander forever for a way back. The rules of dnilbian society are often arcane and some are idiosyncratic, like how the Graf must have their four arms working or visible at all times, or how the Oal must keep their dorsal fins at a perpendicular angle above their spine at all times in public. Dnilb do not question these rules, as they view obedience as the way to harmony and coexistence, and they prize community above all else.

The unknown deity which blessed the dnilb is the center of religious thought in their underwater cities. A central sacred place of worship, built to resemble an overturned kraken, is usually present within the urban areas. It is thought that the deity resembled this shape, though no one knows of it from any cosmology as of yet. The Oal-Dnilb are particularly important for the reason that they make up a majority of the priesthood and body of clerics here. They allow Graf-Dnilbs to communicate and pray effectively with their arcane rules. Oal-Dnilbs that are dedicated to this life often decorate their dorsal fin accordingly with gold and dark blue colors, showing their career denomination.

The names just follow a simple formula, dependent on gender.

Dnilbs are eyeless bipedal fish.
Ability Score Increase. Your Dexterity and Intelligence scores each increase by 1.
Age. Dnilb mature at 5 or 6 years of age. They can live forever, as they do not die of age.
Alignment. Most dnilb are lawful one way or another.
Size. Your size is Medium.
Speed. Your base walking speed is 25 feet. You have a swim speed of 40 feet.
Blind. You can perceive your surroundings without relying on sight within a specific radius, as a gift given to the blind fish by the gods. You have a blindsight range of 30 feet but are blind beyond this radius.
One With Water. You can cast create or destroy water as a 1st-level spell at will. You must complete a long rest before using this trait again.
Amphibious. You can breathe both air and water.
Languages. You can speak, read, and write Common.
Subrace. Choose from the Oal or Graf-Dnilb subraces.

Oal-Dnilb are considered the hoity-toity scholastic aristocracy of dnilb-kind. They are highly intelligent and known for their wisdom.

Ability Score Increase. Your Wisdom score increases by 1.
Tongues. You are well versed in that of the foreign. You know two other languages of your choice.
Natural Leader. You are quite good at using your words and leading people on. You are proficient in the Persuasion skill.

Often called the oaf dnilbs, graf-dnilbs are mainly physical workers under the oal.

Ability Score Increase. Your Strength score increases by 1.
Arm-y. You have one extra pair of arms to help with labor. Your carrying capacity is doubled. You cannot use these extra arms to wield weapons or shields.
Grabby. Four arms help you to grab better. You have advantage on Strength (Athletics) checks to grapple creatures.