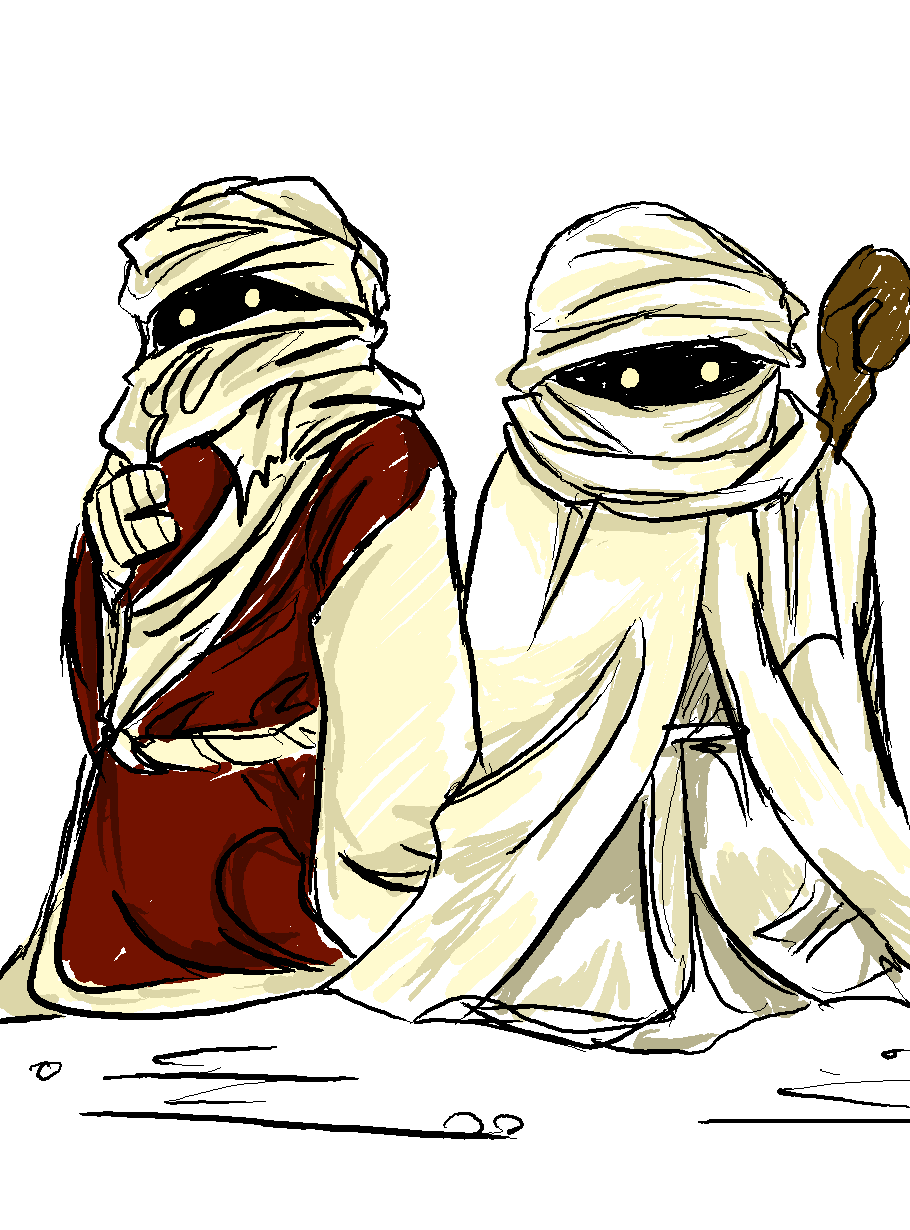 Cursedions small, squat humanoid creatures with large heads and smaller bodies. There are stouter variations which lack a distinctive neck. They all have rather shriveled looking limbs, though the stout ones may have stubby ones instead. Cursedion hands end in three digits with fingernails, one digit being a thumb. For the shriveled cursedions, their fingers are thin and spindly. Stout cursedions have wider, flat fingers and palms. Their entire body is covered in mottled, shriveled skin that looks riddled with wrinkly scarring from burns. This is their most off-putting feature and so they often swaddle themselves conservatively in cloths, scarves and bandages to conceal their identities. Their eyes are big and yellow, being luminous enough to peek out from their clothed concealment. They have upturned noses with flared nostrils like bats, and no ears, just holes on the sides of their heads. Shriveled cursedions looks emaciated, with their ribs and bone showing, as well as knobby knees, but big feet with two toes. Stout cursedions have stubby legs and are ungulates like elephants, but only have two toes. As this race is always concealed by their heavy clothing, rarely does any outsider actually know what they look like, or that there are even two subraces.

Cursedion is a word coming from the term "cursed one," which the race did not properly pronounce. They are said to be descendants of an ancient and wise civilization which the gods had smiled upon. They were granted great wisdom and insight into the workings of magic. However, after some time, they began to accumulate hubris. Their magic was powerful, but not yet on the level of the gods. So what was missing? Cursed with this curiosity, they sought to find out. Upon uncovering a cursed artifact said to contain the heart of a deity, a dark storm of fog descended onto their brilliant city and onto all the civilians. The fog mangled their bodies and burned their skin until they were utterly unrecognizable, leaving carcasses and despair in its wake.

As the people pled for mercy, the gods turned a deaf ear, leaving all of the civilization to collapse. Their greed for knowledge not to be doomed them as the cursed artifact enacted its reach onto their race for generations indefinite. They would all be born in these ugly, painful forms and all would know from this appearance who they were as those cursed by the gods. Those who survived became the cursedions, whilst the others were broken and died. Their home gone, they picked up what pieces they could and concealed themselves from the world, hoping to lift this curse from their kind. They retained their cursed curiosity, which would only serve to impede their progress. Others believed the gods the traitors, and plotted their revenge in quiet.

The cursedions are a people with no land. They wander about in their caravans, usually in big families, going from town to town and city to city. Usually, they set up a small portion of the place for themselves to live, abutting the lower ends of society. They live like one big family made of smaller families, and so, organization can be hectic. People are extremely wary of these squat little figures which never show skin or face. Cursedions, however, usually do not care for other opinions and keep to themselves, having retained a studious mind of a scholar. They like to read about and practice magic, which is considered their own good quality left from the old days. Despite their proficiency in the craft, they are still often the targets of stronger races that would bully them as outsiders.

Names for cursedions usually are short and sound almost childish with a whimsy. They never extend beyond 3 syllables.

Short, little, cursed people with magic attunements
Ability Score Increase. Your Wisdom score increases by 2.
Age. Cursedions have accelerated aging, making them elderly by the time they are 40. They rarely live over 50 years of age.
Alignment. Cursedions tend towards chaotic alignments due to their curiosity.
Size. Cursedions are short, almost like dwarves. Your size is Small.
Speed. Your base walking speed is 25 feet.
Darkvision. You can see in dim light within 60 feet of you as if it were bright light, and in darkness as if it were dim light. You can't discern color in darkness, only shades of gray.
Spell Overdrive. The ability to utilize magic at its greatest potential is something cursedions can still do despite the curse. However, it can only be used sparingly due to its taxing effects on their little bodies to augment magical power. When you cast a spell that causes damage, requires no saving throws, and has no area of effect, its damage increases by an amount equal to your level. You must finish a short or long rest to use this trait again.
Odd Anatomy. The curse has decreased your biological functions, oddly. Cursedions are known to travel long distances through harsh terrain for many days on end with little food or water. Your little body also requires less nourishment. You require half as much food and water per day as a normal creature your size.
Erratic Magic. The magic you use is a bit corrupted and unstable, but you have innate spellcasting nonetheless. You can cast the chaos bolt spell once, as a level 1 spell. You must finish a long rest before using this trait again. Wisdom is your spellcasting modifier for this spell.
Languages. You can speak, read, and write Common and one other language of your choice.
Subrace. Choose either the shriveled or stout subrace.

Ability Score Increase. Your Constitution score increases by 1.
Tough Stuff. You are able to withstand and teeter at the brink of death. When you are reduced to 0 hit points but not killed outright, you can drop to 1 hit point instead. You can’t use this feature again until you finish a long rest.

When creating a cursedion character, you can use the following table of traits, ideals, bonds and flaws to help flesh out your character. Use these tables in addition to or in place of your background's characteristics.
Cursedions can be those of little words, being studious. However, they also are known to be demanding and very impatient.