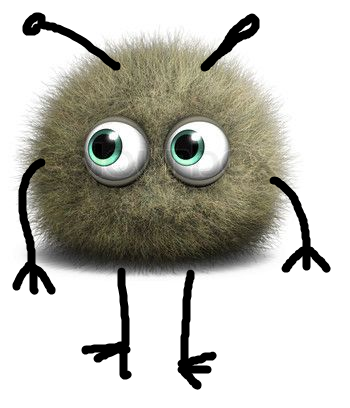 Critterfolk are small and fuzzy creatures that resemble pompoms or dust balls. Their main body is rotund and completely obscured by a large mass of furry hair of varying colors. The texture of this hair depends on the environment the critterfolk grew up in. For example, those who live in the wild may have coarser hairs than those living in the metropolis. Sticking out of the top of their furry body are two antennae that are highly perceptive and sensitive to changes in the air. Having no nose, the critterfolk have olfactory sensors equipped via these antennae. On the body of the critterfolk, no one really knows what lurks under their densely hairy bodies. Their two large eyes seem to be the only parts that can look out from the body set in hair. Even their mouths are concealed. They have a pair of thin arms and legs that hang out from their hairy body, equipped with three phalanges on each end.

Critterfolk were created by a whimsical archfey who made faeries of the ground. As such, critterfolk do not fly. Rather, they were meant to be comforting presences for servants, if not pets and servants themselves. With the revealing of the Feywilds to the Material Realm, critterfolk were among the specimens bought to human civilization via expedition. Despite being fully sentient, many humans prefer to treat them like simple animals to be sold and tamed to people who like moving pillows. The creator archfey thus gave them tools for natural defense so they could resist this kind of treatment. Many returned to the Feywilds. Some never found a way back and populated the wild forests, where they grew to resemble beasts.

Critterfolk tend to reside where larger creatures won't squish or bully them. Their strength is in their immense numbers, as they live in complex mounds that can up to hundreds of members at a time. Their primary dwellings are usually hidden from sight, whether within the hollows of trees, under rocks, or even in underground burrows and mazes. They are extremely adept scouts, usually preferring exploration and caution to outright combat. Every mound of critterfolk has a chief and a powwow of elders who direct the community as a single body. Given their low defenses, critterfolk never travel alone, and are usually found in groups of 6 or more. Many yearn to return to the Feywild while others believe their archfey led them to this world for a reason. They get along well with other smaller fey like fairies and pixies, usually being a part of their societies.

Like most fey, critterfolk are a bit whimsical. However, this is held in check by their sense of caution, developed after years of being poached upon. Unlike many other fey, they do not have innate spellcasting to rely on, and so they use solely their numbers and wits to survive. They can run very quickly when need be, and will often run if it is for survival. However, when with allies, they adopt a harder stance and try to stay together, as they believe the greatest strength is in numbers. Allies outside their own race are hard to come by, as they feel often looked down upon for their size. They can seem a bit insecure on the issue, but they become stalwart friends to those who show the will to defend them in times of need.

Small, furry fey
Ability Score Increase. Your Dexterity score increases by 2, and your Charisma score increases by 1.
Age. Critterfolk mature quickly, at around 13 years of age. they only live to be 70 or so.
Alignment. They tend to be chaotic and neutral, concerned with mainly their own affairs.
Size. They are only a bit taller than two feet. Your size is Small.
Speed. Your base walking speed is 25 feet. You have a climbing speed of 15 feet.
Darkvision. You can see in dim light within 60 feet of you as if it were bright light, and in darkness as if it were dim light. You can't discern color in darkness, only shades of gray.
Overlooked. You are proficient in the Stealth skill. You have advantage on Dexterity (Stealth) checks when attempting to Hide from Medium or larger creatures.
Furry Body. Your thick hairs protect you from cold temperatures. You are resistant against cold damage. You are also unaffected by Extreme Cold[1].
Puppy Eyes. Once per encounter, can use an action on your turn to make yourself seem as lovable and harmless as possible. Until the end of your next turn, all enemies within 10 feet of you that can see your cuteness have disadvantage in attack rolls against you.
Fey Ancestry. You have advantage in saving throws against being charmed and magic cannot put you to sleep.
Languages. You can speak, read, and write Common and Sylvan.

When creating a critterfolk character, you can use the following table of traits, ideals, bonds and flaws to help flesh out your character. Use these tables in addition to or in place of your background's characteristics.