Crimson House is designed thematically around the Years of Gold campaign setting: the characters, creatures and places in it are all part of the setting. That said, the quest needs only slight variation to fit the needs of any gaming group or setting. Pay extra attention to making sure the creatures fit standard D&D, since Years of Gold uses several variant rules and modified features.

The backdrop of the quest is a particularly wicked bordello, which means two things: first, only a city and setting dark enough to accommodate these features can support the quest; and second, make sure everyone in your group can handle the setting. There's never shame in saying no to playing something that makes you feel uncomfortable or bad.

The quest is mechanically a short dungeon crawl (2-3 encounters and a simple battlemap), but the main idea of the quest is to study the themes of an unpleasant bordello, so it is in many ways a roleplaying encounter. Play up these sides of the quest as much as possible.

The Von Gutherberg lineage has, from time immemorial, run prostitution services in Redford and all over the western kingdoms. The decline of the family's current head, Thomas von Gutherberg, is reflected in the atmosphere of the bordellos: once they were a necessary evil, even enjoyable and happy places, but the mad noble's influence has made the nests of utmost corruption. Anything you can think of, the Crimson House (which is the largest bordello in Redford) can offer - for a price.

The quest consists of the players going to the Crimson House (possibly to visit but much more likely to assault), and any events that lead up to this visit. It's up to the Dungeon Master to design the conditions that lead to the quest taking place, but the hooks mentioned above are a good starting point. The players should always have reason to search every room in the Crimson House, so make sure that whatever they're looking for is in the last room they check - entirely by chance, of course.

Visit to the Crimson House[edit] 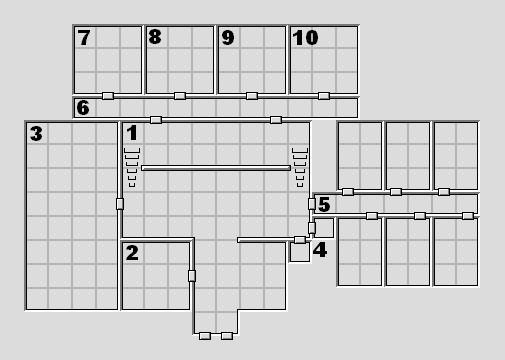 The players enter (usually with violent intent, especially if they know about the goings-on in the bordello) the Crimson House and rummage through it, looking for someone depending on the plot hook the Dungeon Master is using. The idea is to visit each room to better witness the horrors of the place; the reactions of characters can become wonderful ground for roleplaying.

The soft candlelight of this room does nothing to dispel the eerie feeling of unpleasantness that creeps over you as you enter it. The floors, walls and ceilings are made of rough, unfinished wood and covered with thick, red carpets stained with years of unkempt. The room is full of men and women, many wearing too much clothing while others are wearing altogether too little. Nervous murmur lulls up and down.

The prostitutes and customers of the Crimson House have absolutely no allegiance with the bordello or its personnel: many of the prostitutes are practically slaves, in fact. While the customers will run away at the firs sign of trouble (after perhaps a round of angry demands to know what's going on), many of the prostitutes wont: this is their only source of income, many fear the wrath of the Von Gutherbergs, and quite a few are addicted to wickerdust which the guards hand out freely in exchange for "services".

This stuffy little room both looks and feels unpleasant. The militant order of the tables and chairs, as well as the lack of any sort of decoration, suggests that this room is used as a break room by the staff. A rack of short spears on your right confirms your beliefs. There's a picture of a viciously ugly, fat man on the wall, which has been used as a makeshift dartboard.

Candles covered with red paper give this room a powerful red coloration which is probably meant to be alluring, but comes off as tacky. The floor is entirely covered with hundreds of thick mats and pillows, once-magnificent but now stained and dirty. The people in the room are engaged in various sexual activities, ranging from the common to the thoroughly bizarre - you wonder how the dunner in the corner can bend that way. Moans and grunts are the only sound.

20ft.-by-40ft. room, 15ft. high. Floor covered with mats and pillows. By the time the players have reached the mess hall, it's more than likely that the bordello guard has knowledge of their intrusion (unless of course they've entered under the pretense of using the services) and will confront them. Abdila bin Asamiol, the matron of the bordello, usually tries to parley with people first (so as not to scare the customers), and subsequently break up the opposition by leading them to different rooms, trying to trick them into facing one of the natural encounters (often the flesh golem in Forbidden Room I). If this doesn't work, the guard is not afraid to attack.

Abdila leads four guardsmen both in combat and in negotiations. The guard fights effectively together, always seeking to flank since their natural combat prowess is likely much lower than the player's. Abdila dances around the melee, attacking whatever foe is causing the most trouble at the time. If the fight goes south, Abdila seeks out the help of the natural hazards of the bordello: either the flesh golem in Forbidden Room I or the succubus in Forbidden Room II.

You're used to filthy toilet facilities in the city, but this is much worse than average. Offensive graffiti fills the walls, and you don't want to think about the various liquids on the floor. The reek is indescribable.

The corridor: A narrow corridor opens before you, lined by three doors on each side. Each of the doors is decorated with a large, faux-golden number from one to six; they have long since tarnished and bleakened, revealing their fake nature.

35ft.-by-5ft. corridor with six 10ft.-by-15ft. rooms, all 10ft. high. A double bed at the end of each room, with a cabinet by the door; each of the cabinets contain any number of sexual toys, a vial of lubricant, a Small whip and several candles. Special contents (left to right, starting from northern): none; a brass pitcher of salve of slipperiness; none; a dusty cordial infused with elixir of love; none; masterwork manacles.

As the thick door behind you closes, a heavy silence falls upon you. You're deep in the building now, and the atmosphere is dark. There's a potted plant on each end of the hallway, giving off a sweet scent, and four doors on the northern wall. Two strange pulley-systems lie near the doors that lead to the main hall.

60ft.-by-5ft corridor, 10ft high. Doors to the forbidden rooms locked (hardness 15, 60 hp) with the two pulleys on the southern wall (against A4 and A9) operating them (Intelligence or Wisdom DC 12 to figure out how).

This room is lined with thick sheets of metal, making it entirely soundproof, as well as rather claustrophobic. There's no light, but as your eyes get used to the dark a disturbing sight opens up before you. Thick, red lips, much plumper and fuller than a human's could be; perky breast that point out unnaturally far; flawless, pale skin, the only fault of which are nigh-invisible seams on the limbs. The woman on the chair ahead of you is beautiful, perfect - and definitely not human.

15ft.-by-15ft. room, 10ft. high. A chair with manacles (B2), on which there is a human-sized flesh golem (Medium Construct, 69 hp, AC 19 (-1 Dex, +10 natural), grapple +11, slam +11 melee (1d10+4)) crafted to look like a beautiful human female with flawless skin, except for several red tattoos, all of which read "whore" in various languages: Common, Dunner, Dwarven etc. Two cabinets (C1, C3) with whips, daggers, razors and other devices of torture in them; a flaming sickle can be found in the eastern one.

The golem attacks those that approach within 5 feet of the chair unless Abdila has given it a mental order not to. It never seizes an attack unless specifically calmed by Abdila (who gets a +2 competence bonus on the Charisma check, having operated it for so long).

At first glance you think you stepped into a bird menagerie of some sort, but the awful truth reveals itself as the light from the corridor behind you falls on the cages. At least a dozen pixies are kept caged in rusty old bird cages, apparently fed only with rotten fruit and water. The ordinary cheerfulness of the fey is gone: they look at you with empty, uncaring eyes, apparently waiting for you to do something.

15ft.-by-15ft. room, 10ft. high. Ten cages on stands, seven with one and three with two pixies in them (for a total of thirteen pixies, of which four are male and the rest female). Cage doors locked (hardness 10, 1 hp; Open Lock DC 20 to open, Strength DC 12 to burst; key in chest). A small chest (A1) with various unpleasant sticks and rods (some stained with blood) as well as three vials of lubricant, a pair of ripped-off pixie wings, a silver key (opens the cage locks) and a +1 razor (Small dagger).

The musky smell of this room reminds you of a stable. The earth, unlike all others in the building, is made of dirt. On the back end of the room there's a water trough and to your left, a few open barrels filled with cheap animal feed. On a farm, this'd be a perfectly normal room. Here, it's a grim sight of perversion.

This room is lit with a strange light that seems to spring from nowhere, concentrated on the center of the room. A huge rune, made of silver dust and dried blood, dominates the room, in the middle of which there is a mind-blowingly gorgeous, nude female figure. She's clearly not a mortal, however: large, leathery wings emerge from her back, and her flawless skin has a soft, red shade to it. She smiles a smile that makes you blush and beckons you closer.

15ft.-by-15ft. room, 10ft. high. The whole of the outer wall is dominated by a phony magical circle that's supposed to trick people into thinking the temptress demon (calling herself Ariol after a former prostitute she sucked dry) in the middle of the room is imprisoned. In truth, she's working for the bordello and gets her reward in the form of lives (roughly every third customer never steps out of the room again).

Ariol takes pleasure in acting the role of a sexual slave, presenting itself as a redeemed member of its kind and forced into submission by the inhuman Abdila. It is eager to hug (or in the case of those people with lower morals, sexually service) its saviors, bestowing negative levels (which, for roleplaying purposes, you shouldn't tell players immediately of unless they succeed on the appropriate saves). It is not bound by the fake protective circle in any way, and can move and fight freely if need be. It bears little to no allegiance to the bordello, and will rather escape than stay and fight. Teleporting out and trying to lock the characters in is a common tactic, after which it takes a trip to Abdila for some backup.