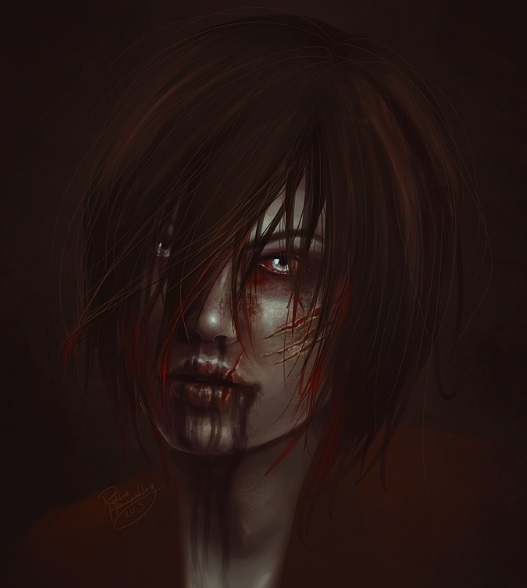 Example of a Cherufe; art by ruthieee

From a distance, a Cherufe is easily mistaken for a human—but on closer inspection, they are obviously anything but. Their skin comes in ashen greys that match the volcanic terrain they favor, they typically stand a head taller than the average human, and they possess a powerful tail that extends most of the way to the ground from the base of their spine. An articulated, streamlined carapace runs along their spine and shoulder blades—this reptilian armor comes in colors usually compared to rusted iron or copper, and is also present in patches along their forearms, shins, and abdomen. Despite their externally similar builds, Cherufe have extraordinarily dense skeletal/muscular systems, and are much heavier and stronger than a human of comparable size.

Beneath the surface, a Cherufe's dense musculature is a deep crimson. Due in part to their culture and in part due to their physiological differences, it is more common to be able to see beneath their skin in places than it is for a Cherufe to be spotless. A Cherufe does not heal like other races—an open wound will darken and seal itself after a fashion, but it does not scab over. Instead, the outermost layer of flesh—which already stiffened into the darkened membrane that protects a wound—is gradually converted into a new section of skin. Muscle tissue is then generated to replace that which was lost. The entire process can take up to a month for a mere scratch, making the main disadvantage of this trait its time constraints and the relative vulnerability of their scabless wounds. However, where the common races cannot regrow large patches of skin and require costly transplants, a Cherufe can regenerate any size wound if given the time—amazingly enough, this includes lost digits and even most of a limb, although that process is more complicated.

Cherufe are often garbed in the furs and skins of their kills, but sometimes are seen in more sophisticated garb and intricate plate armor. They do not lack for artisans and armaments of their own, and in times of conflict will tend towards the latter mode of dress. It is common for Cherufe to wear their own blood as a badge of honor, so expect to see the scars of healing injuries accented by this makeshift warpaint. It's usually left exactly as it was spilled, so streaks from the mouth and nose are amongst the most common of decorations. Cherufe have no facial or body hair, and the dark hair that grows from their head is usually worn with little or no ornamentation.

Most races avoid the Cherufe, for obvious reasons. The Cheruvi tribes are fierce rivals, and even relations within a tribe are sometimes strained. However, some more militaristic peoples have an uneasy friendship with the Cherufe, seeing in them a body of disciplined warriors that would be valuable allies in troubled times.

The Cherufe have a brutal culture that very quickly weeds out those they would consider weak or soft. Those who survive are jaded and cynical individuals with a penchant for violence, but a sense of self-discipline rivaling the most ascetic monastic orders. While they rarely have any respect for laws outside the traditions of their tribe, they usually prefer to avoid trouble with law enforcement officers and executioners.

Cherufe are nearly always evil, but are as often lawful as they are neutral. Cherufe that follow the path of chaos are rare, and are generally outcasts from not only their tribes but all of Cheruvi culture and religion. This makes them especially dangerous.

Cherufe are most comfortable in lands that others would consider unbearably hot, and are often found around active volcanoes and geyser clusters; this is doubly true since the scalding fluids found in such locations play a large role in their religious beliefs.

Every Cherufe speaks their own language, Cheruvi. Most also speak Anuvi, if only to taunt those they face in battle.