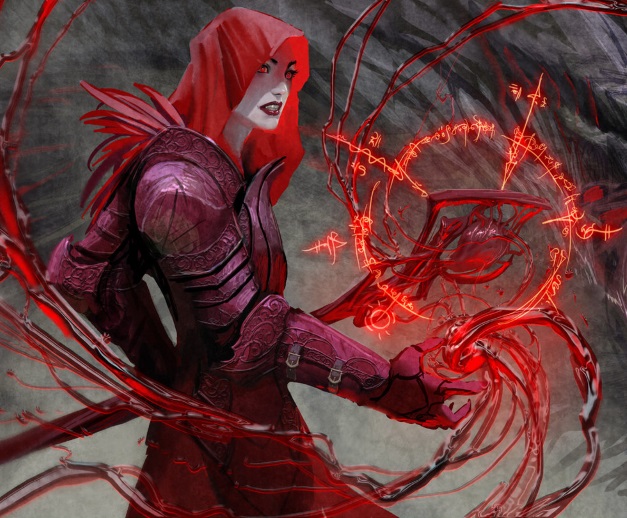 An example of a Marrow Priest; art by Nebezial

Background to be inserted. Needed revision.

Description to be inserted. Needed revision.

Abilities: Marrow Priests are, first and foremost, artisans: a high Intelligence score will improve the quality of their Bloodwork, and allow them to work effectively in more fields. True to their Cheruvi origin, however, the vast majority of them are also skilled combatants trained with an eye towards supporting their fellows, and will benefit from a high Dexterity score.

Races: Marrow Priests originated amongst the Cherufe, and so many of the most skilled are of that race. However, the discipline has spread far and wide, so virtually any race can practice this form of shamanism.

Alignment: Any. Marrow Priests are not bound to any particular creed or deity, although those of Lawful and Good alignments have a tendency to shy away from the brutal, invasive nature of this power.

All of the following are class features of the Marrow Priest.

Weapon and Armor Proficiency: Marrow Priests are proficient with all simple weapons, the longbow, the shortbow, and light armor.

Bloodwork (Su): A Marrow Priest's most versatile ability is her ability to forge blood into objects of virtually any nature, given the time. This does not have to be her own blood—it can be drawn from willing subjects with a minimum of effort, and when forging Bloodwork items for others a Marrow Priest usually uses the subject's blood. This class feature can be treated as a template applied to items created using this ability; Bloodwork items weigh 33% what the base item does (rounded to the nearest quarter-pound), have 120% the hardness. Their hitpoints and damage are unchanged by this template. What follows is a breakdown of the rules supporting this class feature; a more complete version can be found PLACEHOLDER.

Forging: To forge a Bloodwork item, a Marrow Priest must have the blood required, enough time to complete the process, and succeed on an Intelligence check with a Difficulty Class equal to 10 + the pints required (medium) + the time required (also medium) for weapons and equipment, and 10 + AC Bonus for armor. A Bloodwork item requires ten pints of blood for every eleven pounds of weight, plus one pint per pound of the remainder (rounded to the nearest half-pint). It takes a number of rounds equal to twice the cost in pints to forge a Bloodwork item (always rounded down). If a Marrow Priest does not pass the required check, the required time has elapsed but they may immediately try again—the blood is not wasted unless they discard it by turning their attention elsewhere. A few common example items are given on the table below, to demonstrate.

Enhancement Bonus: As a Marrow Priest grow ever more skillful in her craft, her Bloodwork improves. Depending on the nature of the object, it gains a specialized bonus with the Marrow Priest's current Enhancement level. A Marrow Priest gains one level of enhancement every four levels, and starts with none.

Exsanguination: If a character should ever fall below 60% of their maximum blood volume, with at least 20% of that loss in the space of 15 rounds (or one-and-a-half minutes), they will most likely die of rapid blood loss. They must pass a DC 20 fortitude check, or die. If this rapid blood loss is not stopped, they must continue making fortitude saves on subsequent rounds; each consecutive round increases the DC of the required save by two.

Should a Marrow Priest ever go 1d6+1 days without a fresh pyrope infusion, they will lose all of their powers—the DM makes this roll in secret whenever a Priest gets an infusion, so management of this is an important aspect of the class. To regain their powers, they must re-introduce pyrope to their bloodstream and wait one week, with infusions every two days.

Back to Main Page → 3.5e Homebrew → Campaign Settings → The Dreamwalk