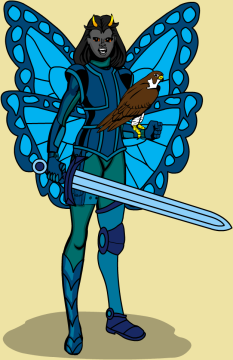 Most arcanists are execute their abilities in the most perfect fashion; to know the exact method of casting, and then use that to produce an effect. Cerulean Imitators do not do this. Instead, they experience the effect in question, feel how it changes them, let it push and pull at the channels and machinations of their mind and soul; only then can they truly know a technique, and only then may they use it.

Abilities: Cerulean Imitators have the Following game statistics. Intelligence determines how easy it is to learn abilities, how powerful those abilities are, and how many can be learned, Constitution lets you take more punishment before going down, Wisdom gives you have a better will save, Strength determines your damage in Melee combat.

Races: Anything that is smart and resilient has the stuff to be a cerulean imitator. Dwarves, Humans, Gebbys, and the occasional Half-Orc are all suitable to this class.

All of the following are class features of the cerulean imitator.

Weapon and Armor Proficiency: Cerulean Imitators are proficient with all simple and martial weapons, with all types of armor (light, medium, and heavy), and with shields (except tower shields).

Imitation Slots: A cerulean imitator can only know so many abilities at one time. A cerulean imitator Begins 1st level knowing one imitation. Cerulean Imitators can't know more than one breath weapon or gaze attack or the like. (That does not mean that knowing a breath weapon excludes knowing a gaze attack.) When you learn a new imitation, you may replace an old one.

Monstrous Trait (Ex): At every level divisible by 5, a cerulean imitator may take on a physical characteristic of a creature he has encountered. (such as wings, gills, etc.) And if the change is drastic enough, changes to a monstrous humanoid (DM's Discretion.)

Timeless Body (Ex): Upon attaining 8th level, a cerulean imitator no longer takes penalties to her ability scores for aging and cannot be magically aged. Any such penalties that she has already taken, however, remain in place. Bonuses still accrue, and the cerulean imitator still dies of old age when her time is up.

Other Classes: Cerulean Imitators readily befriend wizards, who they fell a kinship with. They often bond with barbarians, fighters, and monks, who usually fight with them on the front line.

Advancement: There are several prestige classes (That I am working on) that are made exclusively for cerulean imitators (Spider Savant, Tarrasque Mimic, and Vampire Impersonator).

Cerulean Imitators in the World[edit]

Daily Life: Cerulean Imitators do not necessarily follow a certain creed, and have widely varying imitations and talents, and so their daily lives are unique to each individual.

Notables: Virask "Blue Spider" Stipin Is known for her unhealthy obsession with spiders, her Phase Spider lusus, (Which she gained by feeding her hawk lusus to it) and her poisonous bite.

Organizations: There have been known to be cerulean festivals where imitators of all color and distinction congregate to dance, drink, fight, and trade imitations with each other. Some of the larger cities have academies to teach and train wizards, cerulean imitators along with arcanists of all kinds. Depending on weather or not it fits with your setting, there may be Imitators guilds in major cities that are run by one (or more) High azure council(s).

NPC Reactions: Outside of combat, lower level cerulean imitators look and act like unusually smart fighters; people who are used to a fighter's company won't give them a second glance. Within combat, this is very useful since a hostile NPC will probably completely miscalculate a cerulean imitator's abilities, until they start using imitations. Higher level cerulean imitators will usually have a strange or altered appearance, and therefore they often draw a lot of attention (desired or not).

Characters with ranks in Knowledge (Arcane) can research cerulean imitators to learn more about them. When a character makes a skill check, read or paraphrase the following, including information from lower DCs (With the possible exception of 1).

Cerulean Imitators in the Game[edit]