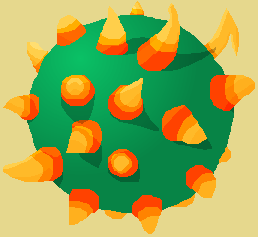 Gebbyblybyb (Gehb-bib-lib-ib) appears as a large, winged gebby progenitor with Gills, and five tentacles protruding from both of it's sides. According to gebby (Gehb-bee) mythology, Gebbyblybyb was a demi-deity of birth and fertility who, along with the rest of another pantheon, watched over a different material plane, before an unknown entity started destroying it. There are many contradictory stories, but the points that are almost always consistent are: that Gebbyblybyb survived, the rest of the pantheon was destroyed along with their home plane, Gebbyblybyb defeated and took on the trait of progenitation from a beast of the Far Realm, consumed vast amounts of the multicolored light shining from what was left of it's corpse before giving birth to the first gebbys, and later the second generation of gebby progenitors. What the beast was called, what it looked like, and it's previous roles in the story all vary wildly. The two most popular versions state that it was a creature that either Gebbyblybyb just came across and killed as a means to an end, or that it was the thing that destroyed the pantheon, and that Gebbyblybyb only needed to finish it off in it's weakened state. Gebbyblybyb has never had anything to say about these stories in recent history.

The one thing Gebbyblybyb cares about more than anything else is the perpetuation of the gebby race. She values her people adventuring out into the many different planes, and ensuring their survival.

Gebbyblybyb's Clerics, who are almost always gebbys or half-gebbys, Usually dress in cloths that are the color of their blood, with jade trim. If they are not a gebby, or have jade blood, or mutant blood, they wear black with jade trimming. Her temples usually act as an entrance to the Gebby gestation caverns, and they are the first sign of civilization that the pupae see. The temples are where the pupae live until their homes are built, they give the pupae their signs, facilitate their home's construction, and gather the lusii for the caverns. Her temples are decorated with jade statues, malachite floors, and murals depicting the gebby life cycle.