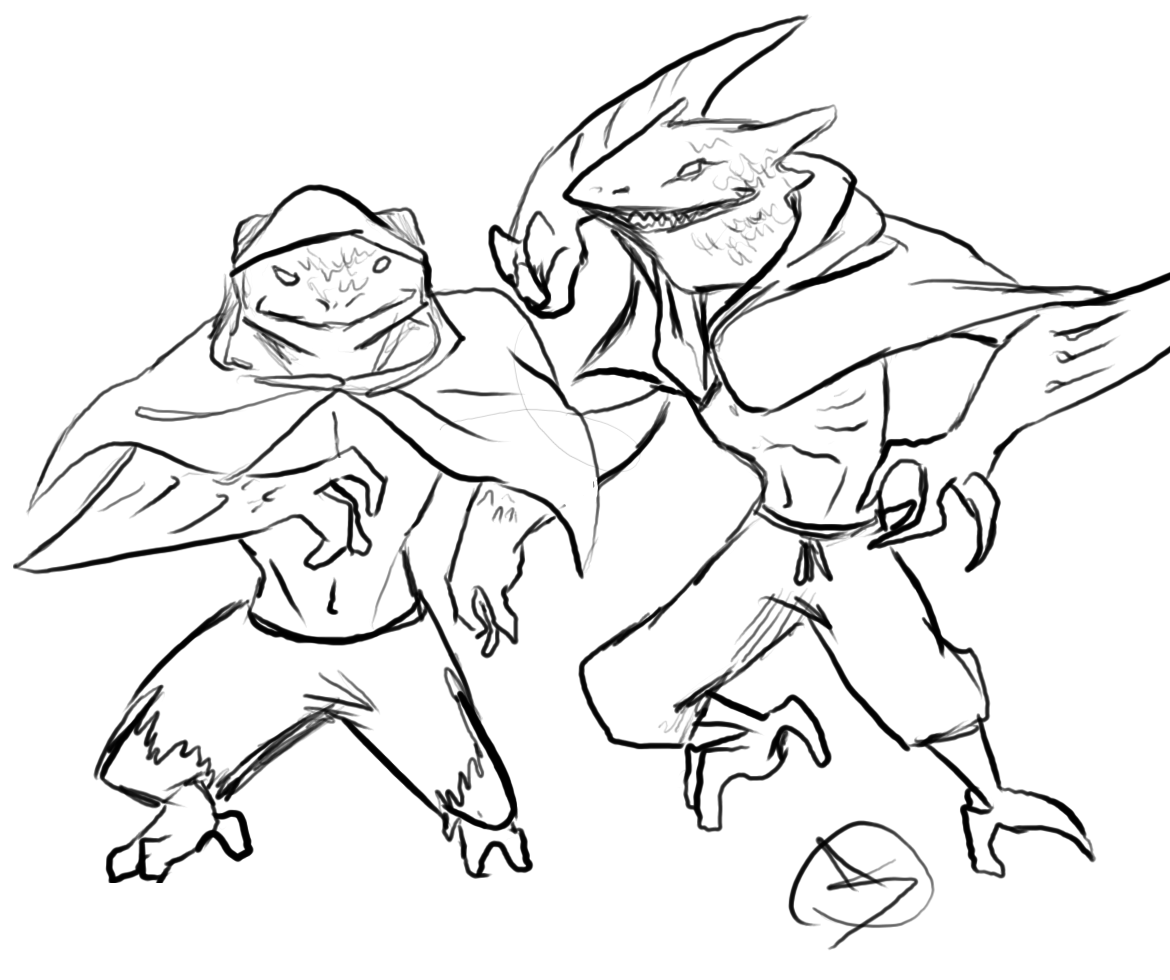 The bladeshii are fiendish creatures with reptilian scaled and horned bodies. Their heads are rather flat and wide, with small eyes. Most notable are the large flat, biological blades set in their arms, which can break and crush more than cut, having a high density and slow swing. Their scales for the most part are either magenta to violet in color, and they usually cover their scaly selves with a dark cloak of sorts. Their tiny teeth are like miniature razors, and they have sharp talons on their three-fingered hands and three-toed feet. But these weapons are underdeveloped compared to their natural bladed arms. A vestigial stump of a tail protrudes out of their rear end and is easily hidden due to negligible length. When angled right, their bodies are streamlined to run and slash enemies seamlessly.

The bladeshii are a sinister kind of fiend that a created from cesspools of death, primarily where warriors have died in bloody battle. Imps can implant the essence of infernal energies into the dead and change the compositions that way entirely. What was once human is now twisted into a wicked creature. Bladeshii are dubbed as immortal due to their persistence. A bladesh can get up several times after being knocked down before permanently being killed with a fatal blow. As such, they have often served as front line runners for armies, being able to take hits for others. However, many of them have sold their services among the Material Realm as not only mercenaries, but also familiars. They have built a reputation as shadowy workers of the underworld, willing to take jobs of the highest bidding. A bladesh's kill is often messy, but he will leave little trace of his having been there.

The bladeshii usually live within their own ghettos within societies in the Material World. They are attracted to the darkness and negativity of places like the slums, where they like to lord over the defenseless that are often neglected by law. Most bladeshii go to hunt on jobs individually, regrouping at the end of it, and sharing the wealth. They are a community kept together by their shared wickedness and enjoyment at the suffering of others. Some are more solitary, and prefer to guard places like dungeons, graveyards, and the like. Bladeshii despise hierarchical order, and so they have none of their own. This drives many towards the Material Realm and away from employment within the ranks of devils in the Hells. They all prefer to generally rely on one another like a band of thieves or bandits. If a bladesh betrays his coven, he will likely be killed. They can be highly crafty creatures with a lot of spite.

As fiends, a bladesh takes its name in Infernal. Due to much of the influence from the Material Realm, their names have Common incorporated into it. As common of demons, their names are not gendered.

foul blade armed demons
Ability Score Increase. Your Dexterity score increases by 2 and your Strength score increases by 1.
Age. A bladesh can live forever so long as it is not killed. It does not die of age.
Alignment. Bladeshii are almost always chaotic and evil.
Size. Bladeshii are usually around five and a half feet tall. Your size is Medium.
Speed. Your base walking speed is 30 feet.
Darkvision. You can see in dim light within 60 feet of you as if it were bright light, and in darkness as if it were dim light. You can't discern color in darkness, only shades of gray.
Infernal Ancestry. As a creature with the essence of the Hells, you are resistant to fire damage.
Bladed Arms. You have powerful blades on your arms that are thick, strong and sharp. You can use them to make unarmed strikes. If you hit with them, you deal either slashing or bludgeoning damage equal to 1d4 + your Strength modifier.
Scheming Eyes. You are very watchful of targets, noticing small bits of information here and there to prove your worth as a perfect assassin. You are proficient in the Investigation skill.
Immortal Persistence. When you are reduced to 0 hit points but not killed outright, you can drop to 1 hit point instead. You can't use this feature again until you finish a long rest.
Languages. You can speak, read, and write Common and Infernal.