Any organization or society that has a criminal element, works with the criminal element or has a narcotics background can have a drug laboratory. This one is hidden in a city or town of moderate to large size. The best way to introduce the quest to a game is to have the players gain initial hints of the laboratory's existence and then have them investigate further, until they gain access to the laboratory itself. The players can also be given the quest by a law-enforcing party.

The basement drug lab quest is best played as part of a Years of Gold campaign, since the flavor has been tailored to match that setting. It can be adapted to any style and setting with only minor changes, however, considering the ubiquity of drugs in most settings. Remember to change the goblin stats to standard D&D stats, since the stats used here are for Pansaerian goblins.

An extremely short dungeon crawl with 3-4 encounters and an investigation element. The themes of the quest are narcotics, crime and alchemy; the mood can be anything from light-hearted to serious, depending on your game, but should include touches of mystery.

The players find out about the drug lab or gain hints of its existence in whatever way the plot hook dictates. If the players wish to investigate the situation further, they should mingle with the criminal element, listen to rumors of drug sales, intimidate dealers and ask for information from the local law force.

Various skills are useful in the investigation stage of the quest, especially Diplomacy, Gather Information, Intimidate and Knowledge (local). Each of these skills can provide the following information, provided the players direct the questions to the correct people (intimidating a random barkeeper probably doesn't further the investigation, while diplomatic parlay with a drug addict might). 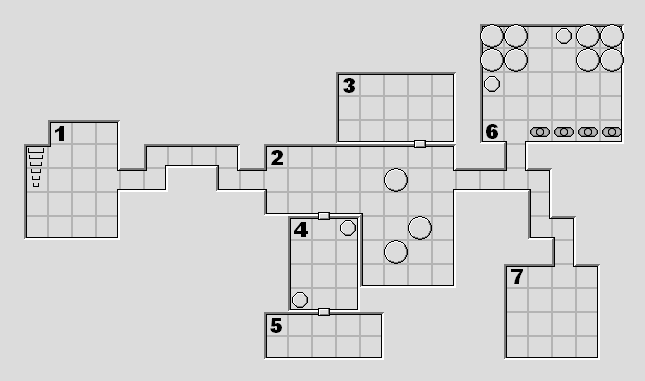 The assault stage of the quest initiates when the players figure out the location of the drug lab and decide to investigate it head-on. The amount of preparation needed for the quest depends on the players and their level: at level one, the quest is moderately challenging, but at level two its more of a side note. The drug lab is located in the basement of a tavern, black market or similar shady business: the stairs to the cellar are found behind a locked door.

This basement looks like any another at a quick glance, although it has an unusually overpowering fungal smell. Molds, mushrooms and muck of all kinds infects the plank-reinforced dirt walls, and the only furniture is a few (apparently discarded) crates. A plank door on the other end of the basement opens to a dark, twisting passageway.

You walk through the rickety tunnel with a feeling that whoever built it doesn't care much for safety. Dim spots of light ahead of you slowly grow as you proceed, and soon you reach a large hall. The ceiling, walls and floor are made of packed dirt and supported by just a few scant beams. The light you've approached comes from lanterns that illuminate the tables they are on, the rough tapestries on the walls - and the faces of a score of goblins who are looking more and more aggressive by the second.

40ft.-by-15ft. room with a 20ft.-by-15ft. alcove, 10ft. high. All doors unlocked (hardness 5, 10 hp). Three round tables (B6, alcove A3, alcove B2) with small stools around and a rusted lantern on each. Three small armoires (A1-2, C1) with: three Small longswords, a Small splint mail and masterwork thieves' tools (A1); two grappling hooks, two rolls of hempen rope, a bullseye lantern and three flasks of oil (A2); a Medium net, a Small whip, two Small bucklers, a potion of fox's cunning and a vial of striped toadstool poison (C1). Six goblin warriors play cards and throwing knives in the room, being alert enough to not be surprised when people barge in.

The goblin party reacts to opposition aggressively, howling and immediately taking positions. Two of the goblins wield short swords; they take the front (roughly A5 and C5) and hold off the enemy, while two goblins (armed with throwing knives) rise up onto tables and start the ranged onslaught. One of the goblins wields a longspear and stays next to the tables, striking opponents from distance. The last goblin has a net and throwing knives - he entangles the closest melee character, then proceeds with his knives. The goblins fight fiercely (if not very strategically) and rarely escape. The alchemists in the other rooms are not alerted: they've stopped far too many brawls to care anymore.

This looks like a barracks, if a particularly shoddy one. Three bunk beds and a small wooden chest, gnawed by rats, are the only things in the room, if you don't account for the occasional fat cockroach scurrying across the filthy floor.

25ft.-by-15ft. room, 10ft. high. Three bunk beds (A1-2, A4-5, C1-2); the three alchemists live on the top beds, and the rest share (to put it loosely) the bottom ones. A rotten chest (C5) with an assortment of filthy rags, a thick robe for disguising oneself, a pair of finely-tailored silk gloves of fumbling and 400 gp in an assortment of wallets and pouches.

This room is apparently nothing but a hallway to the next one, although it is a lot cleaner than those before it. Two tall marble vases lie discarded in opposite corners of the room - they might be worth something.

The swarm mindlessly attempts to occupy as many squares as it can, following foes blindly but never as far as out of the mess hall.

A treasury worth a king! Except not quite: the shoddy timberwork, the small chests and an unpleasant puddle of what appears to be vomit really brings the place down. Well, any port in a storm. The room is cold, but not quite as smelly as the mess hall.

A thick, bluish smog constantly pours into the tunnels from this room, disappearing into the cracks of the walls and ceiling. The smell of the room is acrid, and it leaves a bad taste in your mouth. In the room you can see two large copper stills, eroded to a greenish verdigris, slowly humming. A tall goblin woman turns and faces you at first with disinterest and says something in Goblin ["Brawling again, boys?”]. She then has a sudden epiphany and cries a terrified shriek.

The two alchemists retreat deeper into the room, screaming for their brothers to come help (the alchemist in the wickerdust laboratory might hear them). They back up against the wall, attempting to push enemies away with cause fear, and then more often than not enter melee or cast burning hands. They wield sickles and fight fearlessly, partly thanks to being cornered and partly thanks to a hefty state of drunkenness. Don't award full experience for the fight: the alchemists are at a heavy disadvantage.

The smallest whiff of air in this room makes your head heavy and your vision blurred. What the hell is in the air? Through strained eyes you see a couple of tables with alchemical equipment on them, as well as a few shelves with potions and vials both empty and full, as well as a few books. A well-dressed goblin turns to face you, his eyes bloodshot and nose covered in a fine, dirty-white dust.

20ft.-by-20ft. room, 10ft. high. The high concentrations of wickerdust in the air in the room gives everyone except the alchemist (who has grown an immunity) a -2 penalty to Will saves unless the they protect their breathing somehow. If a character stays in the room for a 30 seconds (5 rounds), he is affected as if he had unknowingly ingested a dose. Two tables (C1, D1, D3-4) both with one alchemist's lab set on it, as well as three leather pouches of wickerdust on each. Books on subjects like distilling alcohol, poisonous mushrooms and home biology on two shelves (A1, A4), as well as: a pitcher of chloroform and a small bronze figurine (worth 50 gp) (A1); a dagger poisoned with spider swarm poison (Fort DC 11, 1d3 Str/1d3 Str; 50% chance of cutting self when picked up), a vial of antitoxin, a tanglefoot bag and two leather pouches of wickerdust. The alchemist in this room is out of his mind on wickerdust, and most of the fighting is done by his minion, a clockroachMM4 that's programmed to clean the floor.

The clockroach takes the blunt of the attack, starting by spraying acid onto those unlucky to be in the front. The dusted-up alchemist unleashes a chaotic assortment of spells, starting with the strongest but never really caring what he hits. At any rate the fight will be a random one.