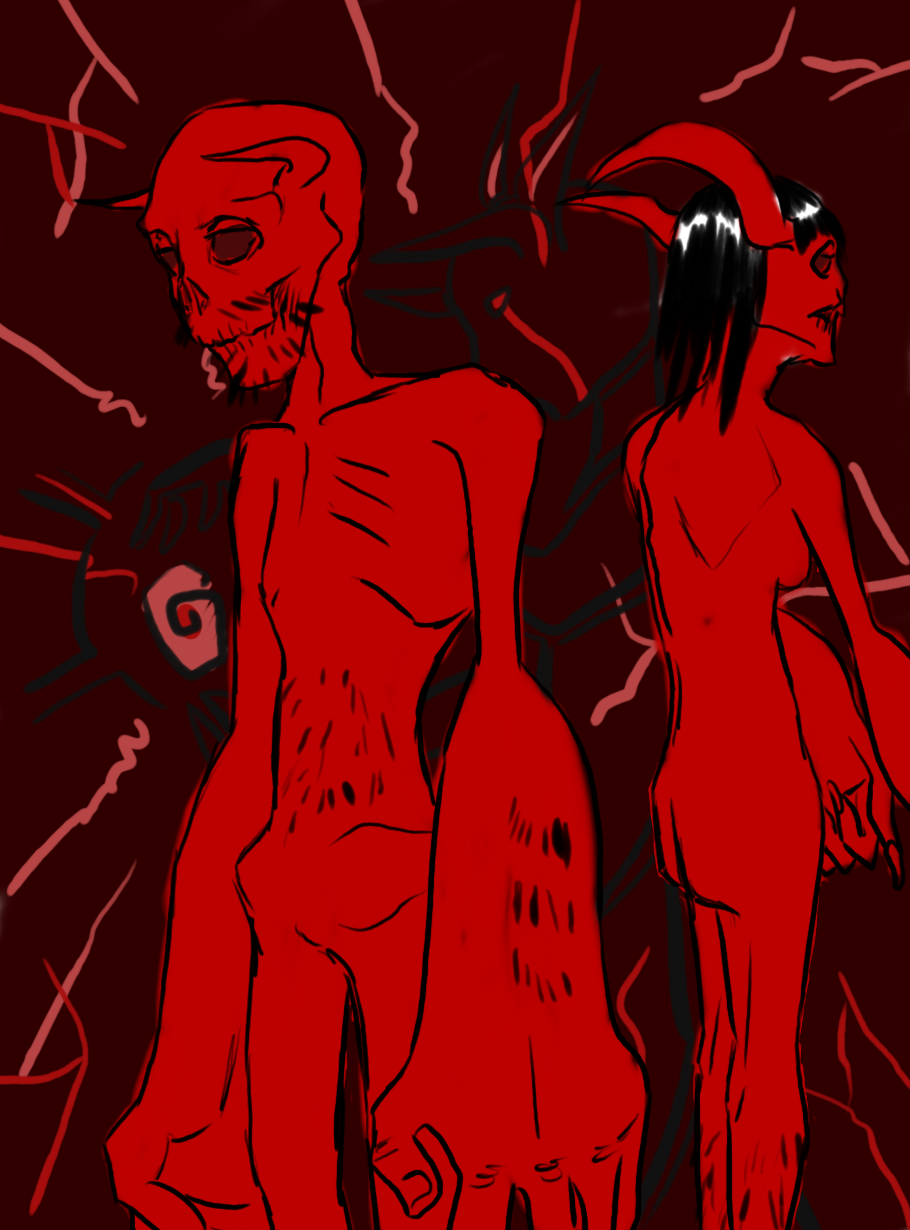 A male and female baeron, before a depiction of Vago, by Yanied

Baerons are skeletal faced humanoids that are actually constructs. They often have red skin and grow only dark hair on themselves. Their forearms are stocky and their hands are large. Two horns usually protrude from their temples. Males have forwards facing horns and females have reverse facing. Their faces often are very wrinkled looking and lacking flesh or fat, making them appear gaunt. People often say they are an ugly race. Though they may get harmed, baeron are known not to bleed.

Baerons are supposedly a race coming from the canyons and rich, fertile lands of minerals. Their folklore tells of them being formed from bone molded with red clay by the hands of a deity. Their deity, a being called Vago, is depicted with two pairs of horns, one forward facing and the other backward. He made the baerons with his horns, one pair for each sex, as a sort of maker's mark. They were placed on the world's arid areas to tend to the soil, where they would grow and die, returning to their element.

Baeron live in mud structures similar to adobe structures. As they live in a mineral rich area, they know well about how to read the veins of material, how to excavate them, and what they are in their properties. Baeron often trade sandstone and other minerals to merchants who peddle to rich families looking for natural decor. On their own, baeron live in small family units in houses which make up their towns, usually nestled in canyons and chasms. Because there is often a danger of water accumulating there at the depths, baeron homes are often elevated on ledges carved into rock. They are known for being a rather solitary race, preferring to be left alone. Usually an elder of some kind leads a town with council. They have a hierarchy based on age, as they believe aging brings them closer to true knowledge of the natural world.

Baeron worship Vago, a deity associated with the earth, and, specifically, red clay. The clay is sacred to baeron, as it is believed to be their very essence. It is said to get its red color from Vago's blood, which he mixed in when making the baeron. Adobe structures in baeron towns often have some red clay mixed, believing it to lend the structure the protection of the deity. In their religious rituals, they rub red clay on their bodies to make markings. Their skin absorbs the mineral and they call it communion with their god.

Baeron usually use names in reference to the duller kinds of minerals as they find things like gems and metals too flashy.

Red humanoids risen from clay
Ability Score Increase. Your Constitution score increases by 2 and your Wisdom score increases by 1.
Age. Beron usually live about 150 years before reverting to mud entirely.
Alignment. Baeron are usually neutral, though they sometimes try to do the right thing.
Size. Baeron are about as tall as humans, if not shorter. Your size is Medium.
Speed. Your base walking speed is 30 feet.
Darkvision. You can see in dim light within 60 feet of you as if it were bright light, and in darkness as if it were dim light. You can't discern color in darkness, only shades of gray.
Mineral Trace. Whenever you make a Wisdom (Nature) check related to the geology of a mineral or mineral vein, you are considered proficient in the Nature skill and add double your proficiency bonus to the check, instead of your normal proficiency bonus.
Earthen Mold. You were created out of materials, allowing you to bypass many organic needs. You don't need to eat, drink or breathe. You don’t need to sleep and don’t suffer the effects of exhaustion due to lack of rest, and magic can’t put you to sleep.
Natural Mining. Baeron harvest materials for trade with seamless mining techniques. You know the mold earth cantrip and can cast it at will.
No Trace. Baeron are highly secretive and take great care to never lead people to their towns unless desired. You may choose not to leave footprints when walking in earthen terrain.
Construct Nature. You are construct type instead of humanoid. Therefore you do not benefit from healing spells or potions. You are also immune to poison damage, being poisoned, and diseases. Instead, the mending spell can be a source of healing for you. When it is cast on you, it has the following alterations: It has a casting time of 1 action. If you have 0 hit points you become stable. As part of the casting of mending the caster may expend any level of spell slot to cause you to regain a number of hit points equal to 1d8, plus their spellcasting ability modifier. For each level of the spell slot expended you regain an additional 1d8 hit points.
Languages. You can speak, read, and write Common and Terran.