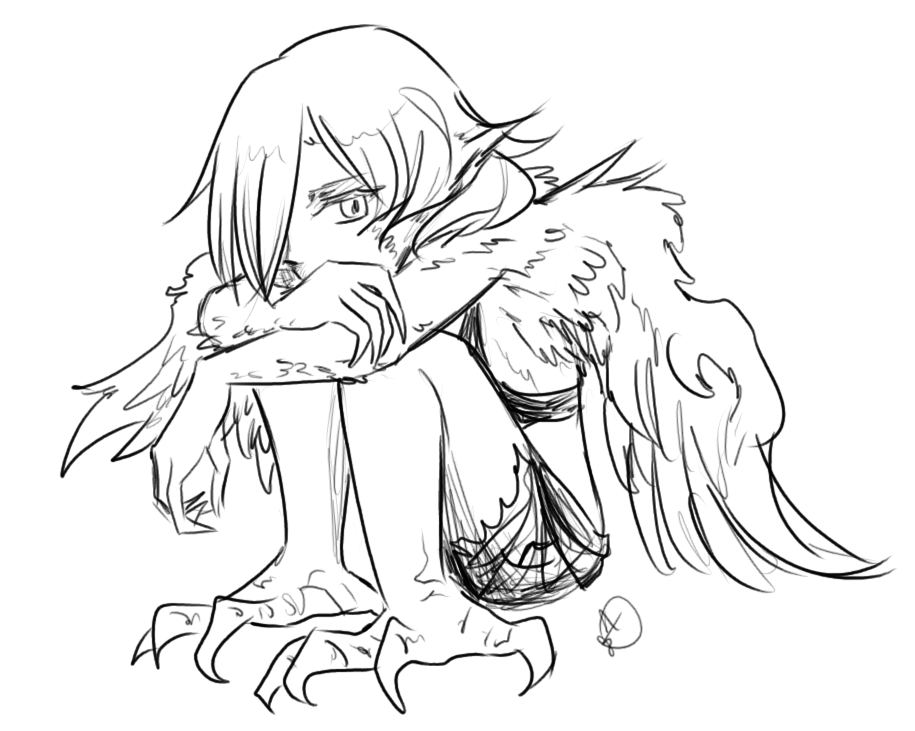 Avion are a mutation in the harpy race, seen as outcasts in both their harpy nest and in the human cities. Avion have small feathered wings that can be used to fly but only for a certain amount of time before getting tired. Usually, they carry the traits of their mother having feathers along their hands, wrists and calves, as well as talons on their feet and hands. Smaller, useless feathers dot along the back of their neck and in their hair giving them a downy feeling. They often have marks or scars left from the cruel treatment they received from their Harpy parents, ranging anywhere from minor to severe.

Harpies are a female race. Males have never been recorded, though it has been observed that harpies are the cause behind many male humans going missing in the vicinity of their nests. These humans are deemed presumed dead until proven otherwise, but remains of men have been found within a raided harpy nest. Occasionally a harpy flock will move on from their nest and leave behind unhatched eggs. Some of these eggs are seen as failures due to them not hatching in time and left for dead. These are the avions. It takes avions slightly longer to mature in the egg than regular harpies.
Avion are a recent race. They have been around for but a mere 100 years. It is theorize their coming to be was due to a recent spike in the stress levels of harpies as encroachments from other races shrink their normal territory and force more migrations. Avion have been looked down upon as unnatural and have even got abandoned by both parents at some point. If the avion lives to the age of maturity in a harpy nest, it is then cast out and chased well away. If an avion manages to be saved by the human male parent and escape, they are once again raised to maturity but cause a bit of anger and resentment shown by the male parent. Typically the avions are males born by a fluke in the predominantly female society. Female avions often are more human-esc and live very different lives than that of their mothers. Avion do not look for peoples opinions though and usually do as they please, usually being quite chaotic.

Avion are usually raised in the wild by their harpy parent not giving them the realization of Society. But on extremely rare occasions, avion would be raised by their human parent. Avion are either treated as monstrosities like their harpy parent, often being abused and treated poorly, or like any other odd race like the tiefling. If raised by their harpy parent, the avion will be removed from the flock and exiled, since they are not seen as fit to survive in the nest, and carrying tainted blood not fit for reproduction. If raised by their human parent, the avion will be allowed to live with them for longer learning more about society but not much as they are still seen as an oddity and often treated as though they were a disease. Their human parent often comes to resent them knowing their life would be easier if they had chosen to leave the child behind and not have a constant reminder of the ordeal of being kidnapped as breeding stock for a lesser race.

Most avion are named by their harpy parent due to their human parent usually not surviving to be able to escape and raise the child.

Avion are very agile half harpy half human creatures usually occurring from a mutation within the egg.
Ability Score Increase. Your Dexterity score increases by 2, and your Charisma score increases by 1.
Age. Avion reach full maturity at age 10 but live up to 600 years old.
Alignment. Most avion are predominately chaotic, some are neutral or both. But on rare cases where the avion is raised by the human counterpart instead of the harpy, the avion can be good.
Size. Avion normally are around 5 foot tall and weigh around 100 pounds. Your size is Medium.
Speed. Your base walking speed is 30 feet.
Harpy's Flight. Avion have wings as a harpy would but smaller than harpies. You have a flying speed of 30 feet, and cannot fly above 30 feet. When you take damage while flying, make a Constitution save with a DC equal to 10 or half the damage is taken, whichever is higher. If you fail the saving throw, you instantly plummet to the ground and take fall damage. You cannot fly while wearing medium or heavy armor.
Talons. Your talons are natural weapons, which you can use to make unarmed strikes. If you hit with them, you deal slashing damage equal to 1d4 + your Strength modifier, instead of the bludgeoning damage normal for an unarmed strike.
Alluring Voice. You know the friends cantrip. When you reach 3rd level, you can cast the command spell once and need to finish a long rest before you can cast it again. When you reach 5th level, you can also cast the suggestion spell once and need to finish a long rest before you can cast it again. Charisma is your spellcasting ability for these spells.
Languages. You can speak, read, and write Common and one other language of your choice.