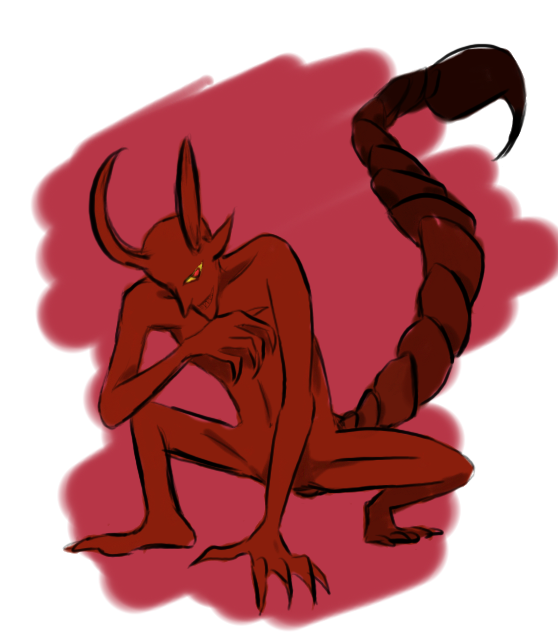 The aracoi are fiendish humanoids that thirst for blood. Their appearance usually consists of reddish-brown skin, sharpened claws, and a scorpion-like tail. Horns adorn their heads in many styles, usually that of a goat fashion. Of course, they may have different traits, such as their skin color. They may have bluish-brown instead of the usual reddish-brown, or they may have black spots on their hide. Their eyes are usually the colors of the portals to negative planes, such as crimson, and their mouths are laid of only the sharpest of teeth. They have body builds ranging from lithe to stocky but their size is usually taller than that of a human.

The aracoi are fiends with human origins. Their horrid birth started with just one ambitious, foolish human. The human and his townsfolk lived all their lives in misery, due to the tyrannical rulers of his kingdom, far secluded from that of others. Nobody would help them. The human decided he should do something about those damned tyrants and took matters into his own hands when a famine struck and his loved ones were among the dead. The tyrants had done nothing to alleviate the food shortage. One night, he went in search of an artifact rumored to grant a wish to whoever was clever enough to find it. What the human never knew was that it was corrupted wish magic, left by a fiend long forgotten in the material realm. It would grant a wish, but instill a terrible curse as a price. He found the artifact in a nearby dungeon and said these words as he grasped it: "Remove the lords of my land, remove the kings of my kingdom, and make sure they suffer in Hell!" His wish was promised and promptly granted. The tyrants, as though a hole suddenly opened beneath them, suddenly dropped from the face of the world. But no one could even celebrate since the curse acted just as swiftly, blanketing the town the human sought to save in a noxious fog. All of the townsfolk, afflicted by the fog for three days, turned into monstrosities who only knew destruction. The human felt the same change as he grasped the artifact, trembling as he too fell victim to the curse. They all sprouted fiendish horns and scorpion tails and their skins turned to that of beasts. These creatures were the first ever aracoi to exist.

These new fiends set on their predetermined courses to afflict destruction on the material realm. They ran to pillage the outskirts of the neighboring nations until those kingdoms drove them back by force. They eventually regained their original senses about three decades later, having been driven back to their own ruined town in straggling numbers. They were horrified by what they became, but because the human held his tongue, no one ever knew of his deed or even his identity. The awakened fiends may have regained their wits, but they still had a newly innate thirst for blood. Where some sought to live lives as a new group of hermits, others acted upon this desire and embraced their new identity.

Since they reawakened in their new bodies, the aracoi have multiplied amongst themselves in relative seclusion, keeping away from others. As time wore on, their numbers grew into splintered communities around. Aracoi societies are uncommon, but not unheard of. Aracoi societies consist typically of 50 or so aracoi, a fair number for safety but remaining manageable and relatively hard to detect. For every society, they have designated jobs and shirkers are punished. In a typical society, roughly 15 of them are warriors, 10 of them are hunters, 10 of them are priests, 10 of them are farmers, and 5 of them are nobles and/or kings.

Those in the nobles positions answer to the people, so as to not repeat their bad history with their tyrants. Aracoi favor productivity as one of their race's virtues, be it slaughter or harvest. Hunters often bring prey back alive so others may satiate their inner drives by murdering them. Farmers are often more like herders of captives to be raised as sacrifices to aracoi bloodlust. Aracoi do eat produce, however. Priests pray to a deity that is among all aracoi but variant in shape and lore depending on the individual societies. There is disagreement if the deity is the same fiend which led them to this fate, but due to the many juxtaposing narratives, it is never clear.

Aracoi names usually consist of many vowels. Male aracoi usually have the letters A, E, and I, while females have O and U as common vowels.

Pure chaos taken a humanoid form, aracoi are beings with scorpion-like tails and horns of various animals.
Ability Score Increase. Your Strength score increases by 2, and your Constitution score increases by 1.
Age. Aracoi mature in 5 years and live for as long as 150 years.
Alignment. Aracoi are almost always chaotic, though aracoi nobles may turn to the side of the law.
Size. Aracoi are usually 6 to 8 feet tall. Your size is Medium.
Speed. Your base walking speed is 30 feet.
Darkvision. You can see in dim light within 60 feet of you as if it were bright light, and in darkness as if it were dim light. You can't discern color in darkness, only shades of gray.
Tail. Aracoi have their tail as their main means of defense as a natural weapon, with which they use to make unarmed strikes. If you hit with it, you deal piercing damage equal to 1d6 + your Strength modifier. Your tail attack reaches 5 feet more than a normal unarmed strike.
Monstrous Beings. Your creature type is both humanoid and fiend.
Fiendish Form. You are no longer simply of man, having been warped to have the skin and nails and teeth from the realm of fiends. You are resistant to fire damage.
Sting. In battle, you can use your scorpion tail to its full potential and inject venom into enemies. As a bonus action, you can make a special attack with your Tail. If the attack hits, it deals its normal damage, and it deals an additional 2d6 poison damage. You can't use this trait again until you finish a short or long rest.
Languages. You can speak, read, and write Common and Infernal.

When creating an Aracoi character, you can use the following table of ideals to help flesh out your character. Use these tables in addition to or in place of your background's characteristics.