Arachnomancers are the masters of spiderkind. Blessed by the spider queen, arachnomancers have power over the spiderkind, and exert their influence over them to call hordes of swarming spiders and to intoxicate their foes.

The spider queen has blessed you and claimed you for her own, and now you seek to destroy her foes and claim greater mastery over spiderkind. You could be a powerful priestess of Lolth, punishing those too weak to be worthy followers, or a spider-lord of Arachne, seeking to bring death to the false spider queen.

Surrounded by swarms of your arachnid allies, arachane lore grants you power your foes never dreamed of. Caught up in a war over the mastery of spiderkind, which spider queen will you follow? 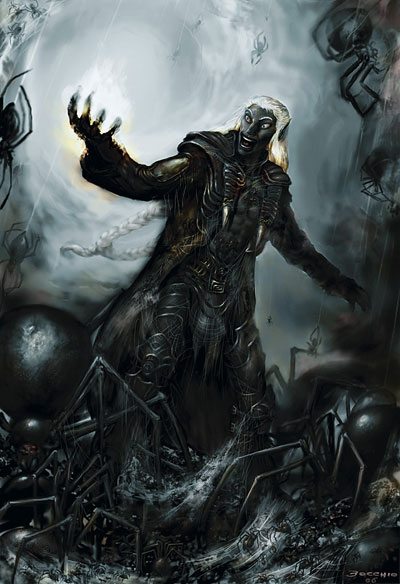 The Swarmlord and the Deathlord are the two arachnomancer builds. Every arachnomancer relies on Charisma for attack powers, and secondarily on Dexterity and Intelligence.

You specialize in abetting your foes with mass swarms of deadly spiders and the like. Charisma is needed for your attack powers, so make it your best score. Intelligence will maximise the effectiveness of your swarms if you choose the Poison Mastery class feature, while Dexterity will increase your accuracy if you chose the Precision class feature. Select powers that have area effects such as swarm powers.

You specialize in the art of inflicting pain- to several foes at once! Bolts of arachane power from a rertriever's eye and summoned spiders- what's not to love? Charisma is your most important ability score. Dexterity can aid your accuracy if you choose the Precision class feature, while Intelligence will increase your damage output if you choose the Poison Mastery class feature. Select powers that deal as much damage as possible.

Arachnomancers make use of Orbs, Rods, Staffs, Wands and Holy Symbols (although they can only use holy symbols of Lolth or Arachne). Without implements, arachnomancers can still use their powers.

Arachnomancers specialize in a wide variety of tactics drawn from spiderkind.

Poison Mastery: Your attacks have the venom of the most poisonous spiders. Twice per encounter, as a free action, when you use an arachnomancer attack power or an attack power from your paragon path, you can deal extra damage against a single target equal to your Intelligence modifier. The extra damage is poison damage, regardless of the damage type of the attack.

Precision: You attack with the precision of a spider. Once per encounter you gain a bonus equal to your Dexterity modifier to a single attack roll.

You gain the Ritual Caster feat as a bonus feat (you treat your arachania skill training as skill training in the arcana skill for the purposes prerequistes for this feat), allowing you to use rituals (although the power for these rituals come from the arachania rather than magic). You possesss a ritual book containing two 1st-level rituals of your choice that you have mastered. At 5th level, and again at 11th, 15th 21st and 25th level, you master two more rituals of your choice and add them to your ritual book. Any ritual you add must be of your level or lower.

You can use the Cloud of Darkness and Unseen powers as encounter powers.

An Arachnomancer is a type of Wizard. You start with three Wizard Cantrips of your choice.

You can speak the spydric language and can pinpoint the location of any spiderkind creature within 6 squares. Spiderkind creatures can understand anything spoken to them in spydric (regardless of Intelligence score) and can speak spydric themselves.

Arachnomancer powers are called Weaves. Your power comes from the arachania— the web of power from which all spiderkind are spawned.