A human woman cries, tearing her hair out, in a lonely, barren field. All around are the remains of what may have been a town. Wood and stone torn asunder by some freak tornado. As she mourns her son, crushed by debris, she glimpses something from the corner of her eye. A cloud? No ... it is here on the ground. It reflects her dirty, tear-streaked face. It looks like a cloud, maybe. Or ... it looks like that damned tornado that ruined everything. Whatever it is, it has the vague semblance of a humanoid. Its eyes are dark and show no compassion for the tragedy before it.

The woman shrieks curses in common at the thing obscenely. It just drifts in response, silent, not a hint of remorse. She flings a random stone at it, which misses. But it seems to get that thing to leave; that thing which called the storm upon them. 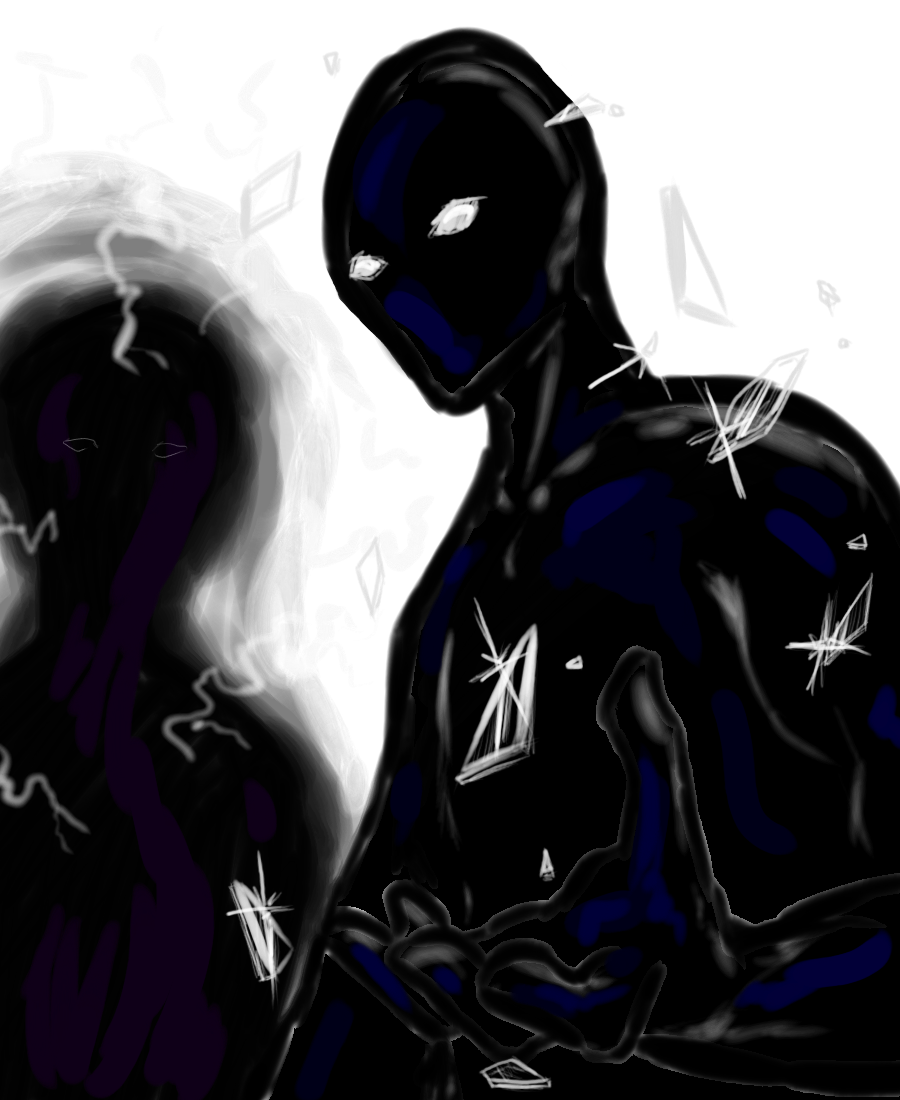 Abstractions resemble floating, shifting clusters of shattered glass or blue energy tinged with grey and black. Some people may describe them looking something like a glittery cloud with some color or sparkling bits of glittering glass. The clusters often turn in a circular way, resembling swirling as it shifts. The edges are wispy and can blow off like smoke. They can take different shapes, but in the Material Realm they tend to have a vague humanoid form. Their heights vary a little like humans, but they are near weightless.

Abstractions are life forms that have existed longer than most living beings can perceive or remember. They originate from the echoes of the material plane, otherwise known as the mirror planes. They mirror existences in a strange fashion, and some consider them an elemental of void energy. Abstractions tend to appear wherever tragedy or disaster strikes. Because of this, they are perceived as heralds of disaster, despite their neutrality between good, evil, law and chaos. They neither intend to cause disaster nor harbor malicious intent toward victims of the disaster they may or may not have caused. Rather, they receive their sustenance through the energy given off by their victims' negative emotions (fear, rage, despair, etc.), which explains their tendency to appear around those times. Abstractions do not need sustenance every day, usually once a month on average. Some signs that an abstraction may have been nearby can include, but are not limited to, natural disasters, war, freak accidents, and strokes of “bad luck”.

Abstractions are solitary beings and are rarely ever seen near people. They appear around times of misfortune, thus earning them a usually negative place in social circles. They do not congregate and are neutral towards their own and other kinds of creatures. Since their feeding cycles are roughly monthly, they often will seclude themselves alone elsewhere until it is feeding time. People who see them may run or try to attack them out of fear or hate, which doesn't help them become any more social. They are never known to try and explain themselves and simply seem to go with the flow, drifting like clouds caught on the wind.

However, some do seem to have cult followings. Their presence as a rumored ill omen makes them popular figures of underground figures hoping to harness their powers or even revere them as harbingers of destruction. Abstractions rarely interact with their fanatics and are often unaware. Some towns thus have the presence of abstractions even if it has never encountered one.

Abstractions are typically named after whatever disastrous event they precede, as if it were a title. They are sometimes named poetically with flourish to highlight their demonized nature.

Name: Landslide, Darkbringer, Geyser Caller, That Which Hails the Storms

A strange creature of mirroring existence
Ability Score Increase. Your Charisma or Wisdom score increases by 2.
Age. Abstractions can not die of old age, nor do they suffer the effects of aging.
Alignment. Some believe abstractions to be evil, due to their presence at major disasters, though their indifference suggests that they are more neutrally inclined.
Size. Your size is Medium.
Speed. Abstractions have a flying speed of 30 feet. However, they cannot fly higher than 5 feet off the ground.
Blindsight. You can perceive your surroundings without relying on sight within a specific radius, and may focus this sense to gain blindsight for a period of time. As an action, you can give yourself a blindsight range of 10 feet for 1 minute, but are blind beyond this radius. Once you use this trait, you can not use this trait again until you finish a long rest.
Amorphous. Abstractions can alter their own body shape to fit through a gap. While unarmored, you take no penalties while squeezing. In addition, you can spend 1 minute to move 5 feet through spaces as small as 1-inch wide. Any items that cannot fit through a space you pass through are left behind.
Telepathy. You can communicate telepathically with other creatures you can see within 60 feet of you. You don’t need to share a language with the creature for it to understand your telepathic messages, but the creature must be able to understand at least one language or be telepathic itself. If the creature does not have telepathy then they can receive and answer telepathic messages, but they can't start a conversation.
Languages. You can speak, read and write in Common and Undercommon.
Subrace. Choose from the mirror or energy abstraction subraces.

Confusing Illusion. You can reflect light in unusual ways, making it seem as if you're in 4 places at once. You can cast the mirror image spell, without any components with this trait. This trait can only be used once. You must finish a long rest before using it again.
Jagged Shards. You send your shards of glass at an enemy in a dazzling and deadly attack. As an action, you may direct your shards in a swarm at a creature within 60 feet of you. They must succeed a Dexterity saving throw of a DC equal to 8 + your Wisdom modifier + your proficiency bonus. On a failed save, the creature is blasted with your shards and takes slashing damage equal to 2d6, and half as much damage on a successful save. The damage increases to 3d6 at 6th level, 4d6 at 11th level, and 5d6 at 16th level. You must finish a short or long rest before you can use this trait again.

Portalic Energies. Any creatures within 20 feet of you on your turn can be teleported by you to any location within 20 feet of its original location, if willing. If unwilling, target(s) must pass a Charisma saving throw or be teleported. The DC for the throw is 8 + your Charisma modifier + your proficiency bonus. You must complete a long rest to use this trait again.
Aura of Energy. As a reaction, you can force any creature within 5 feet of you to attempt a Constitution saving throw of DC (8 + your Charisma modifier + your proficiency bonus) or take 2d4 force damage. You must complete a long or short rest to use this trait again.