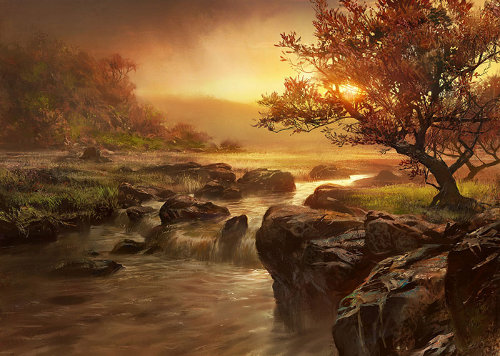 Information about Redgate the Campaign Setting.

The Creation of Redgate: Notes on a Scandal[edit]

This last month I have been reading quite a bit of Irish Folktales and Mythology. These are down right fascinating tales of near godlike heroes living a fantasy world like no other. Every hero has a divine birth granting them awesome prowess in combat and romance. Their weapons become legendary in their hands as they evenhandedly devour their enemies. The male heroes are always having inter-species sexual encounters; on land, sea, or air. The female heroes gain the friendship of marvelous flying creatures of every kind.

Their world is one of the Pre-Roman Era. Their castles are made of wood and stone, their villages made up of clans and family rivalries, and the stars where the language of the gods themselves. Life was simple and many-a-times violent. Men who reached of the age of 40 were deemed to be elders, filled the wisdom of the world. Nature was where you lived and slept and bathed, neither where there cities, metropolitan addresses, or even paved roads. Everything was wild and new and brave.

Magic was everywhere. Their was no science or learning. Druids and Wizards kept books. Warriors roamed and fought beasts, fowls, and giants. Bards, prophets, and troubadours where your teachers. Faeries ran naked through the trees with the deer, Dwarfs carved stone into monuments of valour on the hills, and Goblins stole your most prized possessions while you slept.

It was a strange place. And, it was a good place. Men had no fear and tread heavy upon the ground. They claimed everything in the name of man. They fought epic wars against everykind of creature. And they always won. How could they not. The Gods had given man this wild land to tame. To tame with the power of their arm. To bring order with the sword. To conquer every tree, hill, and stone they found.

That is Redgate. And, your characters are the Pioneers who will conquer this magic land. Tame its beast, bow its giants, and break its wild nature. It got the name "The Land of Warriors" from the many conflicts fought to tame and control it. And it is good. It is rightful to bring order in the name of Man. It may well be your destiny along with your death. Because, your glory lies hand-in-hand with your doom. No hero can survive his journey. No hero was meant to.

You will die here. And, the trumpets shall ring, the wind will howl, and the heavens shall shout glory to your name. You are destined to become a champion of the people. And you won't be alone. Your little party of adventurers will live, fight, and die by your side. And your legend will live on. Written in the stone, the stars, and the heart of every little boy and girl. You will be remembered.

To better understand this foreign land of magic, mystery, and chaos; it is recommended you read up on your Irish Mythology. I left this Setting to simplicities, to generalities, to your open mind. I never got very very specific. This is so your creative ideas can fill this void and make it a setting of your very own. Consider a Brain-starter. An open door. Its yours to expand and fill. Haha. I hope you have fun, even if you just use only one idea. It will have been enough.