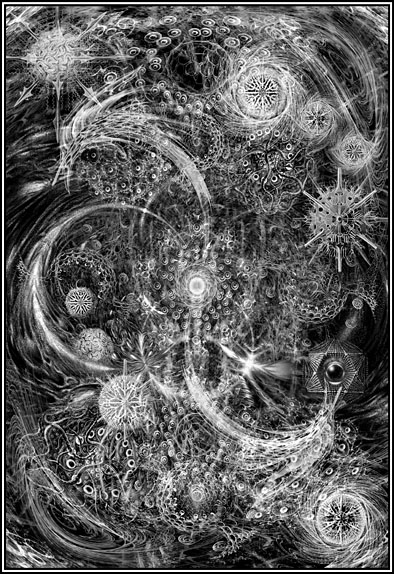 Yog-Sothoth with Azathoth in the center.

Yog-sothoth is the supreme ruler of all the multiverses, some said he is made of billion realities and universes because clearly he is the multiverse itself (In the book Through the Gates of Silver Key, he is said to be coterminous with all time and space and a limitless being ) For he is one of the mightiest and wisest there is; none can defy his will, not even other overdeities. He can take any form he pleases, although he always prefers a form incomprehensible to even other outer gods. He often grants favors to those who amuse him, and these favors are often able to turn a humble mite into an incredibly powerful overdeity. He is infinitely patient, for he is wiser than the all knowing Yibb Tstll, and his might is stated truly more powerful than the all-mighty Azathoth, the Daemon Sultan. Yog-sothoth is beyond the understanding of other so called omnipotent and omniscient beings, beings like Chronus, Ao and The Dungeon Master can only spy him dimly, and what they do know of him frightens them.

Yog-sothoth has no dogma, for there is nothing more he could want, for even Ao is to him as a Mite is to Cthulhu. However he has a rather severe disliking of the elder gods. However he would rather have someone else destroy them, for he feels no need to take action himself.

Yog-Sothoth's clerics can be anyone, they are everywhere, from the most righteous of Solar Archons, to the Foulest of Demons, although Obyriths, Sentient Oozes, Abberations, and Spawns of the Great old ones in particular take a liking to him. The more incomprehensible the race, the more likely that they are to worship yog-sothoth. The Aboleths in particular pay him a nigh infinite deal of respect. Obyriths look upon him as their paragon.