"During the time of Aabassel's fall from his throne, demons of Aabassel were freed from their continuous years of serving their corrupted master was no more, for they were guided above the grounds of the living to fulfill a much greater purpose beyond serving the high. "Be free, my lessers. Let the lost guardians of this hellish world aid you as you blossom." The hero of the Ylvrans commanded. Since that day, the hero showed their face no more, the story of him fading to a dull myth."

They can be easily recognized, especially by their short height and various designs that look similar to many horned animals and beasts. Ylvrans have large horns that measure up to 1 to 2 feet and look similar to animal horns. They have fennec-like ears that droop down. They have a tail that measures up to two feet that droops when upset or nervous. Their skin has a slightly rough surface and skintones that vary in colors of red, purple, and blue, the top of their ears and forehead having a darker tone as well as a darker shade of fawn-like spots. Their iris is commonly shown to have warm colors, silver, and lime green along with the sclera commonly being yellow or completely black. They have shark like teeth and their hair are usually dark colors such as dark purple or brown; hair merging with the skin and having the same pigmentation as the skintone is also common among Ylvrans. They also possess a unique symbol on their body that is the same one that's on their Confiran.

Their guardians, known as Confirans, were given by their mighty hero who took down Abassel. Confirans come in many shapes and forms, often taking the shape that revolves around a proficiency they may be good at as well as the Ylvran's alliance. They appear otherworldly, varying from looking humanoid to looking monstrous. They glow entirely of one or a pallete of colors. They are usually close to their users unless they were seperated in some way. If this is to happen, both the Ylvran and the Confiran must find eachother in some way. Sleeping or meditating is a way of connecting the two easily (If they have a good bond). 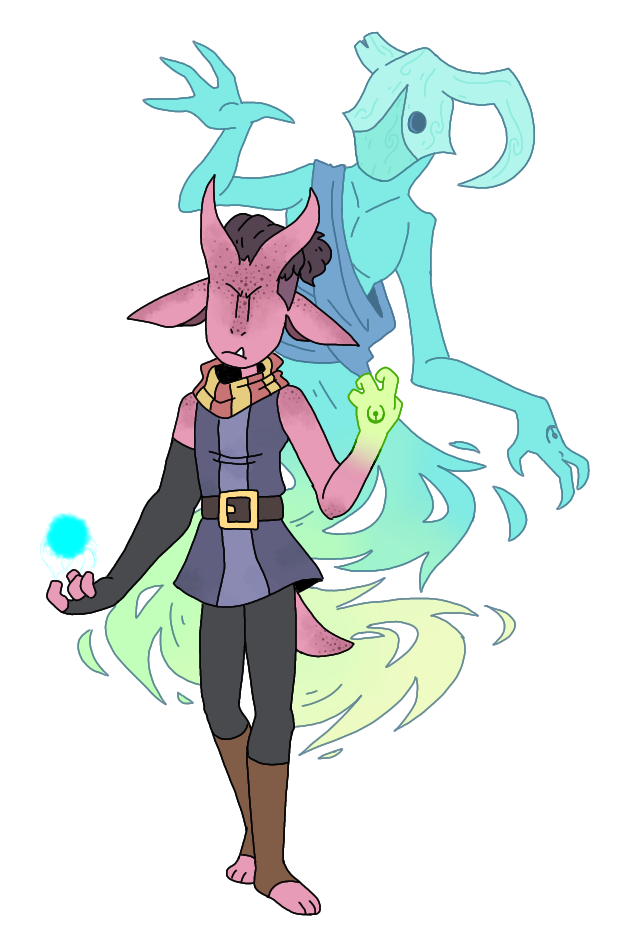 Ylvran are known to be the lesser demons of hell. They were created merely to serve as butlers, servants, and other labor-like job for royalty or the elite demons and generals. They had no other use besides those roles and count not reach higher ranks of demons. During that time, however, a brave hero of the Ylvrans fought Aabassel in combat, eventually the hero winning against Aabassel and letting the Ylvrans free. They traveled to the world above, blessing the Ylvrans with guardians known as Confirans to protect them from any harm in the world above. Later after those years, the Ylvrans have become more civilized and have adapted to the world around them.

Due to living in the infernal plane known as Hell, when they were fist introduced to the world above, it was greatly troubling for them; they had trouble adapting to the light of the sun and how there were a variety of plants and such that didn't appear back in hell. They especially had the most trouble fitting in with other races, usually fearing that they will be attacked by those races. For a while, however, they began adapting quite nicely; their senses against light improved, they have learned new languages, and have created their own culture that revolves around the hero who had saved them from captivity.

They tend to live around forests or areas where humans or any other race barely visit. They hide across the areas, sneaking up on wandering travelers near their domain and raiding them of their items. Although, other Ylvrans who have been more accepted by a certain town or village are more civilized and usually run shops or markets as jobs.

Despite their fear of others and of the world around them, their nature is commonly that of mischevious and wanting to cause trouble. Like many other demons, they find some amusement in the suffering of others. They still have much to understand about the world above, and sometimes are left to be clueless of certain things.

Older Ylvrans mostly have names that are very close to their demonic heritage. Younger Ylvrans may also be named with these if theu want to keep their tradition of naming their children names of Hell. Examples are Ignis, Fulgo, Ghen, Capio, Sino, Fero, Ege, Gredior, etc.

Young Ylvrans, due to them being born after the fall of Abassel, they may be given more humane names that may hide their demonic heritage. Most of these names tend to come out of other races or have the same format as other races' names. Examples are Adda, Alabus, Bermus, Dermin, Halgo, Herum, Filo, Vera, etc.

Ylvran share somewhat similar traits to lesser demons of the underworld. They also have Confiran ancestry.
Ability Score Increase. Your Charisma score increases by 2, and your Constitution score increases by 1.
Age. Ylvran typically live up to 800 to 1000 years of age. Because thay are lesser demons, they live a smaller lifespan than most demons, especially demons above them.
Alignment. Ylvrans are commonly known to have a Chaotic alignment. It's rare for a Ylvran to have a lawful alignment sue to their Infernal backgrounds.
Size. Ylvrans are shorter than humans, standing from 4 to 5 feet and averaging to about 150 pounds. Your size is medium.
Speed. Your base walking speed is 30 feet.
Languages. You can speak Common and Infernal, due to your Infernal heritage.

Hellish Resistance. You have resistance to fire damage.

Holy Vulnerability. Because of your Infernal heritage, you have vulnerability towards radiant damage.