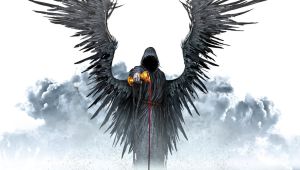 One of the oldest Gods, Xenos's archaic veiws and refusal to form long term alliances have led to him being both respected and mistrusted by many of the Gods. Xenos is considered a mercenary, and unlike many of the other gods, does not seek to guide his followers, but rather allows them to choose their own paths.

Xenos puts great value in spellcasting, especially if it is used in battle to gain the advantage. He is most famous, or infamous, for the creation of vampires and wights, and many paintings of him depict him flying above a battlefield looking on as his followers send waves of devastating magic and armies of undead to bloody the ground with the corpses their enemies.

Xenos insists on a yearly quota of 'blood sacrifices' from his followers; one for each day he 'grants' them. How they arrange this is entirely up to them, and it is not uncommon for his followers to have extremely conflicting beleifs regarding the 'correct' path they should take.

Xenos also insists that once his followers draw their weapons, they must not sheath them until blood has touched the blade; whether this is of friend, foe, or even his follower himself matters little to Xenos.

Xenos has no temples, though anywhere his followers have shed blood is considered a shrine to him, and his followers will often mark the bodies or area with his symbol before pledging it to him.

Xenos's followers are usually Warpriests, Blood Magus's or Warmages, and while other spell casters are common within his ranks, few without magic are ever accepted. Their allignment makes no difference, as a holy Paladin can pledge the corpse of a evil fighter to Xenos just as easily as the evil fighter can pledge the bodies of his orphanage massacre. Due to this, there is no official heirachy amoung his followers, though groups with similar agendas do sometimes form cults in his name. Normally his followers work apart, and should they distinguish themselves, are assigned an apprentice by Xenos himself.

All of his followers carry some kind of bladed weapon which acts as their divine or arcane focus depending on their prefered type of magic. They rarely call him by his name; instead refering to him simply as Master.

While their understanding of their God's will is conflicting, Xenos's followers all agree that spilling blood in his name is the only way to honour him, and any prayers they make involve the blood of their fallen enemies. Often they will follow a ritual of their own devising when pledging the blood of their kills to him, and though their words are often similar, their meaning is different to each.