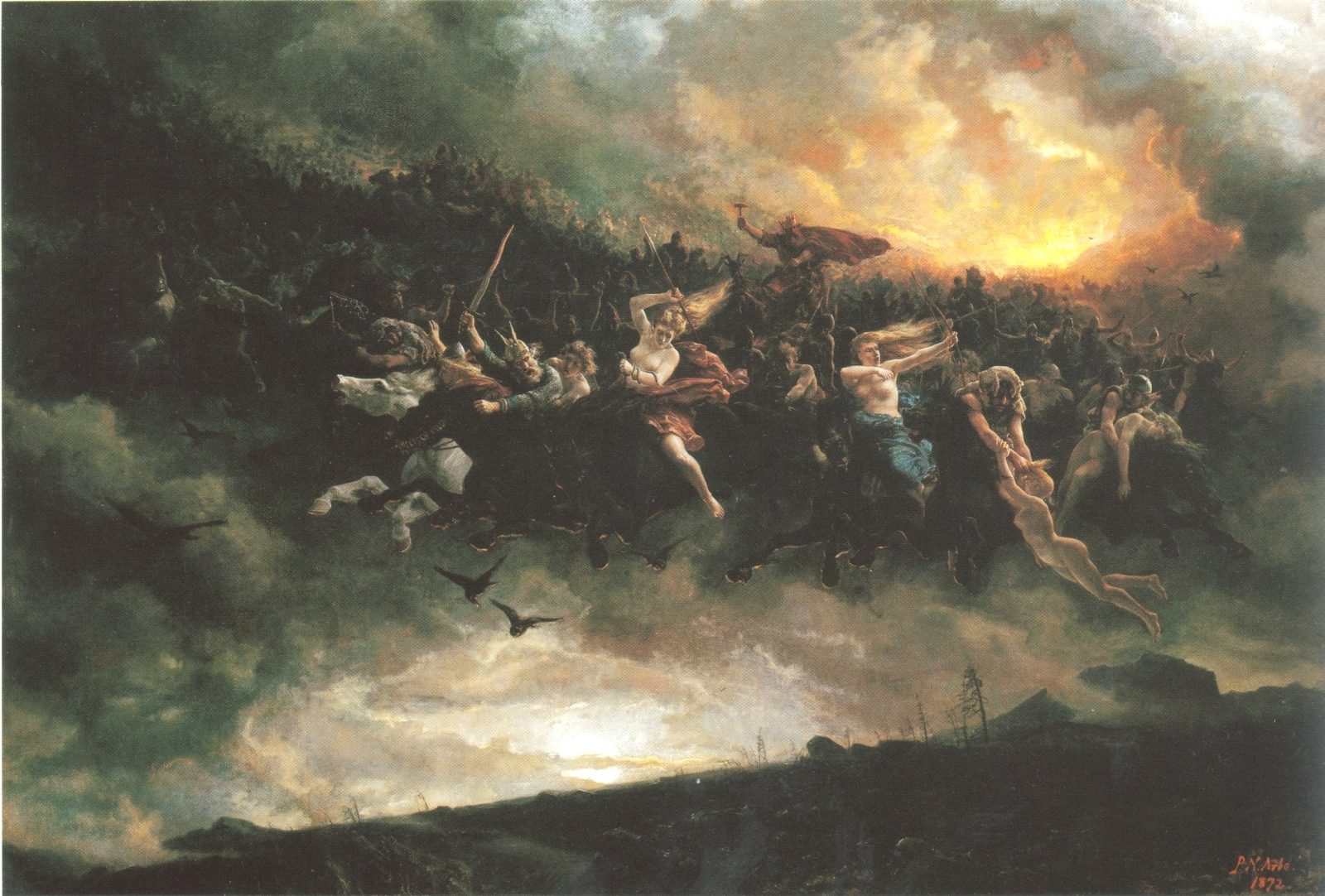 A Wild Hunt is grand and terrifying.

Like a thunderstorm rolling in too quickly, a massive swarm of flying creatures mounted on impressive steeds blanket the sky. They are fully equipped for hunting, each rider having a longbow and short sword as well as a team of hounds. One figure in particular stands out as the leader of the band. One of the hunters blares on an imperious trumpet every so often which seems to spurr the procession onward.

A Wild Hunt is a massive swarm of undead humanoids that follow the orders of a Leader of the Hunt. Most Wild Hunts are not hostile toward everything, but rather hunt down powerful or particularly elusive targets. When pushed to outright aggression, however a Wild Hunt fights at the behest of its Leader. Typical encounters with hostile Wild Hunts begin with the Wild Hunt activating its Hunting Horn Blast followed by repeated Hails of Arrows. When its targets get close enough, a Wild Hunt typically engulfs as many foes as possible (it must completely engulf a creature before it will deal swarm damage or Energy Drain).

Energy Drain (Su): A Wild Hunt which engulfs a creature bestows 2d4 negative levels upon that creature every round it remains engulfed unless it succeeds a DC 67 Fortitude save each round.

Engulf (Ex): A Wild Hunt need only fly into the area occupied by a creature smaller than itself to engulf it. Alternatively, a Wild Hunt can change its shape as a move-equivalent action in order to engulf a creature. (For instance, it can contract itself into a tall cylindrical shape with a side-to-side diameter of only 10 feet, but a height of 200 feet.) In effect, treat the swarm as a spread effect that moves under its own volition (or the direction of its Leader). Creatures that enter the swarm's space or who are engulfed by the swarm's movement take 7d6 points of damage plus energy drain (Reflex DC 54 half). Even if a creature succeeds the reflex save versus damage, it must still save versus energy drain or suffer 2d4 negative levels. Creatures must save each round they remain within the swarm's space. Concentration checks are necessary to cast spells while engulfed. Besides taking damage and negative leves every round, creatures within the Wild Hunt are surrounded by the swarming hunters. They must make a successful overrun attempt to move more than five feet while within the swarm and are furthermore reduced to one half speed. Additionally, creatures can see no farther than 10 feet while within the swarm.

Hail of Arrows (Ex): A Wild Hunt can fire a storm of arrows at any 50 foot-radius circle with centerpoint within 1000 feet of the Wild Hunt's center. The Wild Hunt makes a single ranged attack opposed by the armor classes of each creature within the target area. On a successful hit, the Wild Hunt deals 12d8 points of piercing damage. This attack also affects incorporeal creatures.

Hunting Horn Blast (Sp): This effect functions like a Horn of Blasting except that it deals 10d6 points of sonic damage, stuns creatures for 2 rounds, and deafens them for 5d6 rounds (a DC 35 Fortitude save reduces damage by half and negates both stunning and deafening). A Wild Hunt may use this ability once every 4d4 rounds and affects all creatures within a one-mile burst.

Turn Resistance (Su): A Wild Hunt adds four to its hit dice to determine if it can be effected by a cleric or paladin's turning ability. A Wild Hunt cannot be rebuked unless its Leader is first destroyed and another has not yet risen.

Swarm (Su): Despite being originally composed of individual creatures, a Wild Hunt is treated like a single creature of the Undead type. Additionally, as the creatures within the swarm are mostly small and larger, a Wild Hunt is subject to weapon damage.