Wendigos are cursed individuals, condemned for eating the flesh of their kin whilst in a northern forest. They resemble hulking, fur-covered brutes with a tail and forward-slanting forehead. Although they are similar to lycanthropes, Wendigos are distinguished from the former in several ways: Wendigos are trapped in their new bestial form, and can only resume their original shape through either a successful remove curse spell, or by killing the Wendigo. 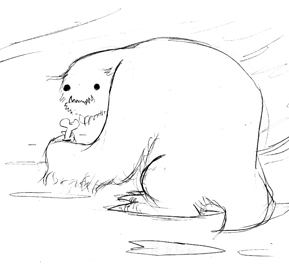 A huge, barely visible behemoth bursts from the thick snowbank and lunges at the nearest trapper. Beating aside his hastily unsheathed sword, it punches him in the chin and sinks its jagged teeth into his neck. You don't know what's more horrific: the ferocity of the attack, or the gore now covering the once-pristine snow as it savagely tears his head from his shoulders. Turning to face the rest of the caravan's guards, it opens its bloodstained mouth and lets loose with an ungodly howl which haunts you to this day:

Although hardly the largest or strongest of their ilk, Human Wendigos are known far and wide for being the most violent and ferocious creatures on two legs. These creatures are excellent hunters, possessing an olfactory sense which allows them to track prey for miles. They can do this for days without tiring, as their bodies are specially adapted to the arctic conditions of their environment. They may band together to form small, nomadic tribes in order to rear their young and bring down larger creatures, such as the wooly mammoth.

This particular Human Wendigo is 9 feet tall and weighs about 500lbs. It understands Common, Dwarven, Infernal and Orcish, but can speak only a garbled version of Common. Due to its great strength, it is considered the chieftain of its tribe. It was originally a fourth level Fighter with the following ability scores: STR 18, DEX 13, CON 18, INT 16, WIS 15 and CHA 16. It possessed the following feats: Power Attack, Combat Reflexes, Weapon Focus (Greatsword), Combat Expertise, Cleave and Great Cleave.

In addition to being ferocious physical fighters, Human Wendigos enjoy ambushing their prey. The method for this is simple: it hides itself in or near a thick snowbank, its thick white pelt making it nearly impossible to see unless you know what to look for: a pair of small, finlike horns on its head. Even then, to successfully spot a Wendigo, characters must make a successful DC 35 Spot Check.

Once it has observed its prey for a sufficient period of time, a Human Wendigo will launch itself from the snow and attack the nearest living creature, catching everyone completely off-guard. It will attack with its teeth, claws, and either a club or any weapons it had prior to becoming a Wendigo. It will also make use of any feats which it possesses in order to make short work of its prey.

It should be noted that a Human Wendigo's bite is considered a Vorpal weapon: on a successful critical hit with its bite, it will tear the victim's head from his body, killing him instantly. Also, it will devour the flesh of those it attacks both during and after the battle in order to heal itself.

Frightful Presence (Ex): The Human Wendigo's very presence is unsettling to humanoid foes, and it can inspire terror by attacking. Everyone within 30 feet must succeed on a DC 16 Will save or else be completely frightened for 5d6 rounds. The save is Charisma-based.

Cannibalize (Ex): Whenever a Human Wendigo deals damage with its bite attack, it regains a number of hit points equal to half the damage inflicted. Any excess gained becomes temporary hit points which last for a maximum of one hour.

Improved Grab (Ex): To use this ability, a Human Wendigo must hit an opponent less than or equal to it in size with its Claw attack. It can then attempt to start a grapple as a free action without provoking an attack of opportunity. If it wins the grapple check, it establishes a hold and can attack with its Cannibalize ability the next turn.

It can also throw a grappled victim like a missile at other foes. A thrown character covers a distance equal to ten times the Wendigo's Strength modifier in feet, and has a +4 to hit. Anyone struck by a flying character must succeed on a DC 20 Reflex save or take 3d10+17 points of damage and be knocked prone from the impact; the flung character takes full damage and gets no save.

Disease (Su): Anyone struck by a Wendigo's Bite attack must make a DC 20 Fortitude save or else succumb to a truly insidious disease known as 'Wendigo Fever' (incubation 1d4 days). No damage is dealt to the character; however, once the disease has incubated he will experience severe cravings for humanoid flesh, and there is a very large (01-25%) chance that he will attack the nearest being without any provocation (roll percentile for every round during a social encounter, and once every five minutes while in a non-combat scenario). If this occurs, the character will attempt a touch attack (with his bite attack); if his attack is successful roll 1d6 plus his Strength modifier in order to determine the damage dealt. If more than five (5) points of damage are inflicted, the character has consumed a piece of his target's flesh and will then flee into the nearest woods, where he shall transform into a Wendigo.

Wendigos have the following racial skill bonuses: +5 to Spot and Listen checks, +8 to Move Silently and Climb checks, and +5 to Hide Checks. In snow, the Move Silently bonus increases to +15, and the Hide bonus becomes +25.

"Wendigo" is a template that can be applied to any Humanoid or Giant, hereafter referred to as the base creature. The wendigo template can be acquired (for those afflicted by this curse) or inherited (for the offspring of other Wendigos. The latter, known as Wendigo "pups," are considered to have average ability scores.

Type becomes Monstrous Humanoid, with the Cold Subtype. Increase the base creature's height by 3 feet. If this is enough for the creature to reach the next size category, be sure to factor in the necessary changes to its ability scores before doing anything else. Don't recalculate the Base Attack Bonus, Saves or Skill points if this occurs.

The base creature immediately gains 4 HD of Monstrous Humanoid, along with an additional 30 hp provided by the Epic Toughness feat.

Base speed is not changed.

The Wendigo's thick fur pelt is resistant to most forms of attack, granting the base creature +8 natural armour.

The base creature retains the ability to use manufactured weapons. It also gains two natural weapons: a Bite (1d8+STR), and 2 Claws (2d4+STR). Its bite attack is considered a Vorpal weapon.

In a full-round attack, a Wendigo will start by biting the foe with its powerful jaws, and then clawing the helpless victim. If it has one, it will then strike with a manufactured weapon.

The base creature gains the Improved Grab, Frightful Presence and Cannibalize abilities. Unfortunately, if the base creature was a spellcaster, it loses the ability to cast spells beyond 4rth level.

Regeneration 2 (Ex): Fire deals normal damage to a Wendigo. If a wendigo loses a limb or body part, the lost portion regrows in 3d10 minutes. The creature can reattach the severed member instantly by holding it to the stump.

Strength, Dexterity and Constitution are all increased by 7. Intelligence, Wisdom and Charisma are unchanged.

+5 to Spot and Listen checks, +8 to Move Silently and Climb checks, and +5 to Hide Checks. In snow, the Move Silently bonus increases to +15, and the Hide bonus becomes +25.

Wendigos typically dwell in cold forests and mountainside caves. If possible, they prefer to make their lairs within a few miles of humanoid settlements.

Wendigos of Huge size or greater are typically solitary creatures, occasionally accompanied by one or two pups. Medium size and smaller, on the other hand, may often band together in small nomadic tribes. It is not uncommon to see such Wendigos hunting side by side with the equally dangerous winter wolves, as such alliances are, more or less, mutually beneficial.