Intended for four level any adventurers.

As a fairly usual noble's mansion, Von Leaven Estate can be run in any campaign - who says it has to be inhabited by Von Leavens, anyway? By fiddling the basic descriptions a little, you can make the quest into a dilapidated ruin, an extravagant place of pleasures or the creepy hideaway of a cult. Furthermore, since the quest itself is an infiltration for characters of any level, it can be played at any level range and is easy to modify.

That said, the Von Leaven Estate is played best as part of a Years of Gold campaign (the hint is in the name). The flavor and the personnel inside are designed with Pansaer and especially Redford in mind, and a read-through is required to adapt the quest to other settings.

An espionage-style quest to infiltrate a building, probably at night. The best mood for the quest is nervous caution: at any moment, the many guards and traps can get the better of the party.

Harold von Leaven, one of the most influential nobles in Redford, has an estate in Old Town, where he spends his winters. In summer, he lives on his ranch, northwest of the city. Von Leaven Estate is famous for its grand design, its generous feasts, and its nigh-legendary wine cellar. Even though the master of the house only abides here at winter, the estate is full of life year round: it is a base of operations for Harold's daughter, Selena.

The players enter the estate through whatever route they choose, try to fulfill their objectives inside, then escape before they are noticed. 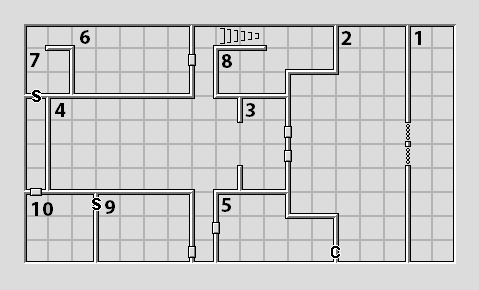 The many tricks and traps of Von Leaven Estate are more flavorful than they are difficult: the main focus of the quest is in roleplay and infiltration skills. The quest can be played at basically any level, since the traps themselves don't have a level: most just alert the guards, ending the quest in capture (or daring escape). For versions of the quest where an inhabitant of the estate needs to be assassinated or otherwise physically confronted, the characters need to be of high-enough level to actually fight that inhabitant.

When running the quest, a DM does have to remember that some of the skill checks in the quest might become trivial to especially high-level characters: if this is the case, increase the DC's, increase the number and difficulty of traps as you see fit, or institute a time limit. Likewise, the treasures and rewards might seem meager, so feel free to increase them alongside the difficulty.

The road ahead of you has grown less crowded and loud. You take this as a sign of approaching richer neighborhoods, and your suspicions are confirmed as you see the houses on both sides: great, extravagant manors. The one directly west of you is particularly grand with its dark wood-and-stone walls and iron fence. A small plaque recognizes the place as "Von Leaven Estate".

This yard is shaded and secluded by massive elm trees. The manor looks even larger up close, and budding paranoia makes the few high windows of the house look like spying eyes. The grass is cut with care, and the trees are obviously taken care of. A fierce-looking German shepherd guards the door. It raises its head and gives you a low growl.

The dog starts barking whenever anyone gets within 10 feet. It avoids direct fights, but does fight if cornered.

The coatroom is decked with red velvet and ample brass decorations. A line of gold hooks, six in total, serve as coatracks, and a hollowed-out troll leg by the door functions as an umbrella stand. The place has a generous and pleasant atmosphere: if ever you've had a better feeling about a house before, you don't remember it.

The first thing to attract your eyes is the beautiful, oriental wall-to-wall carpet - the mysterious designs and intricate patterns of weaving are positively stupefying. A gargantuan dinner table dominates the centre of the room, on which beeswax candles and decorative silverware has been set. A grand chandelier hangs from the ceiling and niches on the walls contain more candles, flower arrangements and busts of former members of the Von Leaven lineage.

This is where the magic happens: the great feasts of Von Leaven Estate are fueled by the delicious yield of this room. The powerful smell of fine cheese and spices is present, and the clean, organized look of the place assures you that this is the kitchen of a high-ranking noble. A young, lanky man is sitting on top of the stove, smoking a corncob pipe. He gives you an alarmed look.

15ft.-by-15ft. room with a 10ft.-by-10ft. alcove in the eastern corner, concealed servants' door (hardness 5, 10 hp) visible from this side. A great cooking stove (C2-3, alcove B1), which is heated with a magical blue fire that gives off intense heat and is maintained by Michael von Leaven. Corner table (A1; Jump DC 5 to hop on) and small, wall-mounted cabinet (A3) containing spices and cuts of beef jerky. Assorted cutlery and silverware on wall-mounted platform above the stove. Barrel of good beer (alcove B2).

Michael, the secret adopted son of Harold von Leaven, spends his time in the estate kitchen. He's mute, and enjoys helping the cooks. He also maintains the magical fire in the stove. When discovering burglars or attacked, he unleashes a flurry of disabling spells, usually casting color spray first and following it with ghoul touch and charm person. Since he can't call for help, he'll try to disable most of or the whole party, then get in contact with the night shift guards. Since he never uses damaging spells and genuinely fights only out of fright, killing him would be a dark deed.

The extravagancy of this room is beyond belief. Gold, silver and hardwood beam at you from every direction. The master bed looks like you could drown in its velvet cushions, and the paintings on the northern wall, depicting beautiful, oriental scenery, are rimmed with jewels. The worktable close by seems crowded with paperwork; directly above it are two paintings: one of a gorgeous young woman [Selina von Leaven], the other of a serious, somber boy [Michael von Leaven].

25ft.-by-15ft. room with a 10ft.-by-5ft. corridor in the western end, 10ft. high. Door locked and trapped (see room 4). Master bed (B1-2, C1-2) with a small chest hidden beneath (Search DC 20) containing two bags of gold coins (300 gp altogether) and a vial of unconsciousness poison (as drow poison). Worktable (D4-5) with chair and pictures of Selina and Michael. Scenery paintings on northern wall.

Even those of high birth share certain needs with the lowly peasant. This is no ordinary watercloset, however: the entire room is decked with squares of the whitest marble, top to bottom, and the faucet is made of pure silver. The toilet bowl is spotless. A large oblong mirror, hanging on the southern wall, reflects your image. You look out-of-place.

You've arrived at the legendary Von Leaven winecellar. Stories speak of secret tunnels going on for miles under the earth, housing countless of thousands of bottles. The truth is far from this: this homey little cellar has an earthen floor, and simple racks of wood house about two hundred bottle of wine. It's surprisingly warm for an underground cellar, and the little window near the ceiling on the eastern wall of the room casts a soft light into the darkness.

A lot less vain than most of the rooms, but well-decorated anyway. Two bunk beds, reaching from the floor to the ceiling, along with a small round table make up for furniture here. An incredibly wide board shows the long lineage of the Von Leavens, all the way to the first Leevanns, members of some long-forgotten northern tribe. Under the table you spot an out-of-place curiosity: a bottle of cheap gin.

The door before you opens to a secret room in the Von Leaven estate! You could have sworn the house seemed smaller on the inside somehow... This simple room hasn't seen a lot of use, except perhaps as a occasional base of operations. A soft scent of lavender hangs in the air. Asides from a bed and a nightstand, the room is empty.

DC 22 Spot check alerts the party of Belle's existence; if not noticed, Belle gets a surprise round when the characters come next to the bed. Belle stays under the bed (cover) and attacks those who get close.

If the quest only consisted of walking through an empty estate, it would hardly constitute a challenge for the average player. Thus, two estate guards patrol the inside of the estate at all times. While for higher-level parties the guards themselves are no challenge, their cries for help immediately alert the scores of soldiers stationed at nearby houses; Von Leaven Estate is very well protected, even if this doesn't seem to be the case.

Harold hires his estate guards from the east, for he knows the combat skills of the soldiers of those countries. Eight such guards patrol the estate during the day, while two patrol at night. Thus, entering the estate unseen during the day is nigh-impossible (although players should be free to try), and the descriptions given here are for nightly operations.

The two guards (guard A and guard B) have unique patrol routes that they follow:

A crafty group of characters (or to minimize the risk of getting caught, just one character) can weave through the patrolling guards if they know the routes beforehand. This requires either having observed the guards change before (by hiding in the building and watching them patrol, which is dangerous) or by buying the information from someone (Gather Information DC 20 to locate such a source, and a hefty price for the knowledge - this price should be varied according to character wealth).

Another way to avoid the guards is to get rid of them somehow. This can happen both during and before the quest: while infiltrating the estate, the guards can be ambushed and silenced (either by binding them, knocking them unconscious or killing them), or indeed silenced; just remember that an unmuffled guard will let out a dying scream, which will alert the others in the estate, possibly even those outside. Various knockout poisons and gases can be employed, the guards can be tricked to other rooms through making noise or ghost sound... Both the players and the DM should use their imagination. Nullifying the guards before the quest begins can happen in a plethora of ways as well: bribing the guards (very expensive and has its dangers), getting them drunk, taking their place after abducting them...

Guards will attack intruders, but they're not stupid: if a four-character party is invading the estate, they won't stick around to die, but instead shout for help and try to avoid the players. Help arrives in 2d4 rounds: the amount of soldiers that arrive from the nearby buildings should again vary with the number and level of players, but should always be completely overpowering. If the players are able to brute-force the quest, the DM has done something wrong.

Certain strategies and spells, the most obvious of which is using invisibility, can make the quest a bit of a cakewalk (though remember that Listen and Spot can let a guard notice an invisible character). This is fine: remember, player cleverness is allowed and isn't an attack on the DM. If the players take on the quest at higher levels, you can give the guards ways to nullify some of these strategies. Potions of see invisibility are your friend.