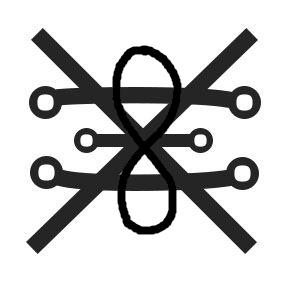 An infinity within an alchemist balance symbol

When there was nothing, there was Void. From within her potent body blossomed "something" which became matter and material. Her opposite was that matter, which eventually gave creation to life. But when life ended and memories faded, everything returns to the void, to her. She was unhappy, getting only these scraps. So she fashioned a lover of her make, and placed him in the worlds in existence. She lived through him among everything and everyone. But it was not to be, for the void cannot exist where there is something, or it will absorb it into nothing. The people called her a demon, a monster. But they could not kill her directly. Instead, they broke her heart. So Void turned herself inside and out and broke, breaking the endless darkness in the skies. Pores of light formed in the ebon cloth of the sky, and so came the stars.

As for Void, her essence remains, a tattered covering of darkness in the fringes of matter. Her dismemberment led to some of the void seeping into all other living beings. That is where the "hollow" feeling comes from. Now, dispersed among people, she lives in the consciousness of everything. Everything still dies, and things are still forgotten and left to oblivion. Sometimes, people have dreams of being wrapped in darkness, suspended and immobile in a void. That is her emotions in us, as her cultish followers say. Now, Void is happy.

The goddess as a whole is but a forgotten vestige of the more primal and rudimentary times of existence. As a result of her diaspora into the world of life and matter, her popularity increased due to her subliminal influence. Cultish clerics in her name dress in pitch black, completely obscuring their bodies in robes and veils. They believe that Void was never an end, but both a beginning and end. It is balance, to have life and death, creation and nil. It is the never-ending cycle which governs all of nature.