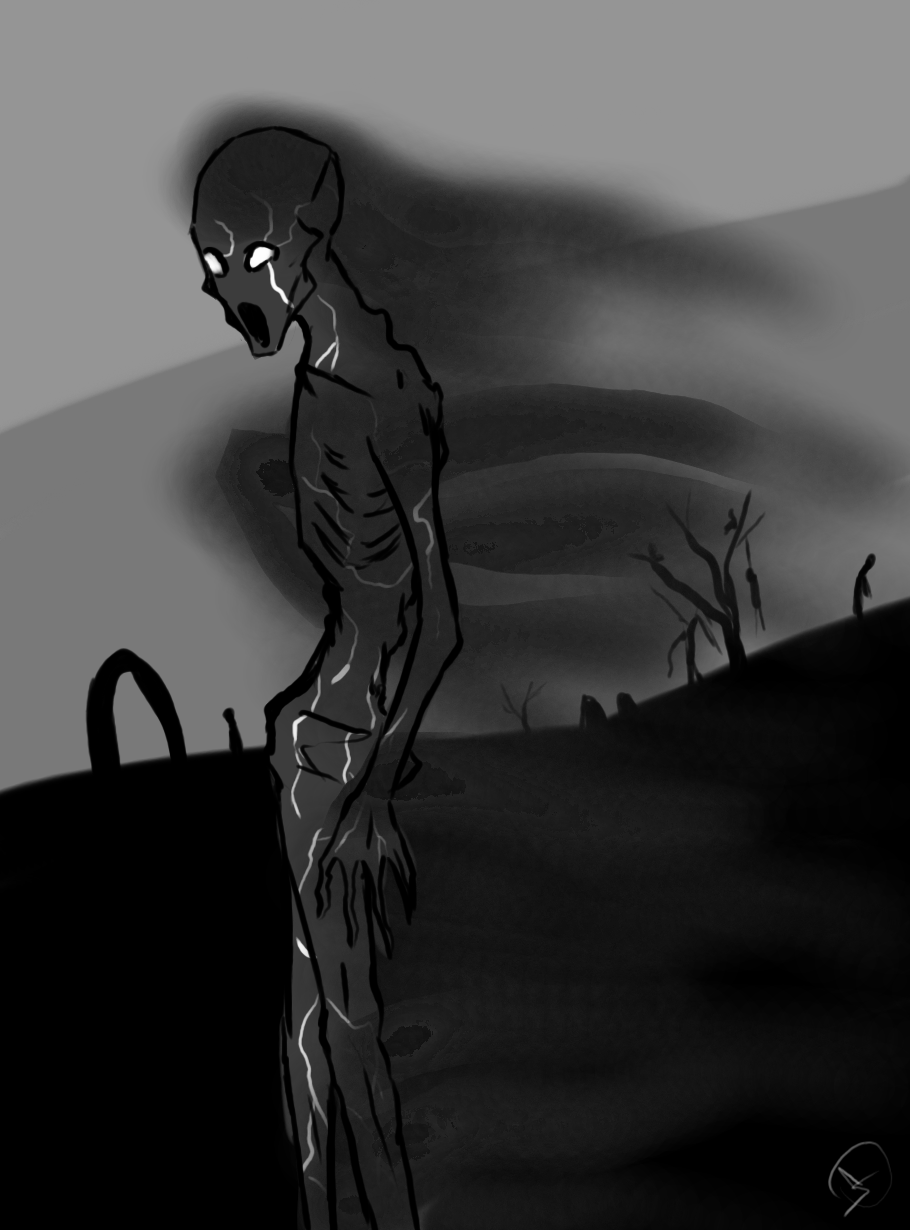 Veilwalkers take on the form of a ash-skinned humanoid. They are covered in glowing cracks, emanating from the fractured frankenstein souls they have. Their eyes are commonly blank and glazed. Not a hair grows on their skinny, emaciated, sexless bodys. Trails of dark wisps, resembling shreds of some veil-like material, enshroud their bodies and trail behind them as they walk. These wisps will billow even when there is no wind. Some veilwalkers have such a large amount of this material flowing from them that they appear to be a misty mass. They appear lightweight and really are.

Beyond the veil is a euphemism for death, though not all recall where it came from or why it is said so. In truth, the division between spirits of the Ethereal Plane and the living of the Material Realm is sometimes called a veil by mystics and necromancers in an archaic fashion. Without the aid of magic, normal people cannot pass through through their respective sides of the veil easily. Ghosts have the ethereal form to do so, and there are spells which can grant one the sight as well as the form to move as a ghost or spirit does. There are scant openings between the two realms which allow for a physical manifestation of the veil.

In those cases, an actual veil, like a translucent cloth, will be present and appear to billowing, even though the air near the veil is often dead and stagnant. These locations are one-way passages to the Ethereal Plane. Once a living being passes through, they cannot return to the Material Realm through the same entry point. Many never find their way to return and so join as a living among dead beyond the veil, eventually to be driven by madness. Eventually, everything behind the veil will migrate to the Fugue Plane to be washed anew and reincarnated.

To deter pesky or stupid adventurers from running into their doom out of curiosity, veilwalkers exist. They are amalgamations of dead spirits which gather in a physical form by feeding off matter that stagnates near the sites of veils. Like roving sentinels, veilwalkers guard these border entries and deter the living from approaching. These veils eventually vanish, as they are anomalies which can appear and disappear randomly, freeing up the veilwalker. Some go on in search of the next veil which they can guard. Others go on to pursue aimless wandering. Sometimes they find a new purpose. Other times, they end up the subject of a local witch hunt.

According to heavy stigma, veilwalkers are attracted to funerals and are also omens of death to come. Their ominous appearance does not help with the perception and draws conclusions also that they are dark-robed emissaries of death. A gathering of veilwalkers is known as a shroud, and it supposedly signals a great tragedy to come, which will cost many lives. While it is true that the veilwalkers are attracted to death, it is mainly due to their need to feed on souls before they pass. Veilwalkers only consume a small sliver of the soul, but that never stops over exaggeration from fearful onlookers. These misunderstood creatures are usually chased away if they are seen, making it rare to see more than two or three gather at a time. They do not always seem aware of one another, rather fixated on aimless wandering.

Veilwalkers rarely take names. Usually, they come to identify with a certain address from someone they trust.

Shady undead creatures who guard anomalous gates to the dead world
Ability Score Increase. Your Wisdom score increases by 2, and your Charisma score increases by 1.
Age. Veilwalkers do not age and do not die of age.
Alignment. Veilwalkers typically are unreactive and neutral.
Size. Veilwalkers are skinny but rather tall. Your size is Medium.
Speed. Your base walking speed is 25 feet.
Darkvision. You can see in dim light within 60 feet of you as if it were bright light, and in darkness as if it were dim light. You can't discern color in darkness, only shades of gray.
Necromantic. Your creature type is undead. You do not need to eat, drink, breathe, or sleep. You are vulnerable to radiant damage, but resistant to necrotic damage.
Dead Tongue. As a bearer of the veil, the language of the dead is decipherable to you. At 3rd level, you can concentrate on feeling and perceiving the dead around you as an action. For the next 10 minutes, you are considered under the effects of speak with dead. For the purposes of antimagic field and dispel magic, this trait is nonmagical. You must finish a long rest before you can use this trait again.
Soul Suck. You can nourish yourself with a bit of soul from the living or recently deceased. As an action, you can designate a creature or a corpse within 10 feet of you. If you choose a creature, you can force them to make a Wisdom saving throw with DC equal to 8 + your Wisdom modifier + your proficiency bonus. On a failed save, the target takes 2d6 necrotic damage, and you regain hit points equal to up to half of the damage dealt. The damage increases to 3d6 at 6th level, 4d6 at 11th level, and 5d6 at 16th level. If you use this trait on a corpse, it must not have been dead for longer than 1 minute. You gain hit points equal to the CR of the creature when it was alive, plus your proficiency bonus. After you use this trait, you can’t use it again until you complete a short or long rest.
Ashen. Your form is dark and the ethereal veils on you help your movement in the dark. You have advantage in Dexterity (Stealth) checks when in darkness.
Languages. You can speak, read and write in Common, but you speak in a drawling manner (e.g. "Iiii...am Heenryyyy...").