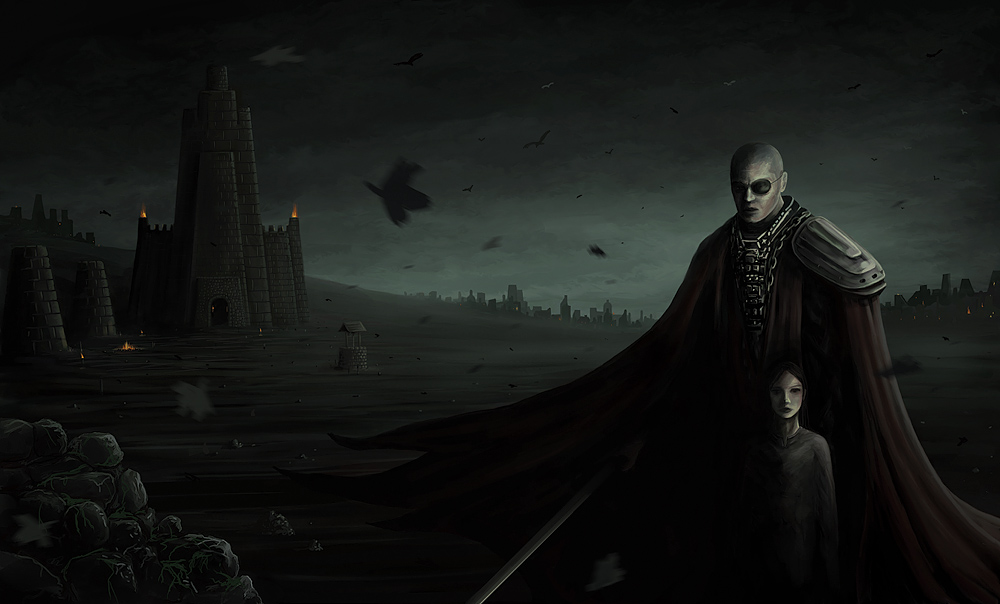 Vassals of Jayem-Dea defend those who cannot defend themselves.

The Vassal of Jayem-Dea is a warrior of balance, a crusader for the equilibrium of reality. They refuse to involve themselves in a battle unless they are needed, and will follow the teachings of Jayem-Dea to the word. If a city is being overwhelmed by a goblin army then the Vassal will fight for the city, but if the city is trying to exterminate the goblins, then the Vassal will defend the goblins whole heartedly without a second thought.

Becoming a Vassal of Jayem-Dea[edit]

A Holy Warrior who follows Jayem-Dea is the most likely to take levels in this class, seeing as it further prove their faith in Jayem-Dea.

All of the following are class features of the Vassal of Jayem-Dea.

Blessing of Jayem-Dea: At every odd level a Vassal of Jayem-Dea gains a gift from the Watcher of Reality, a blessing in the form of strength or insight.

Sight of the Overgod (Ex): The Vassal of Jayem-Dea gains a constant effect of True Seeing out to 10 ft., this Blessing of Jayem-Dea can be taken multiple times, each time it adds 10 ft. to the range of the True Seeing.

Steady Handed: The Vassal of Jayem-Dea gains a permanent +1 miscellaneous bonus to attack rolls, the Vassal also gains an additional +1 bonus against flat footed opponents, this Blessing of Jayem-Dea can be taken multiple times, it's effects stack.

True Will (Ex): The Vassal of Jayem-Dea gains the ability to 1/day, shrug off any magical effects on their body or mind as though with Greater Dispel, using this is a full round action and can only target the Vassal of Jayem-Dea, this Blessing of Jayem-Dea can be taken multiple times, each time it adds an additional time per day that this blessing can be used.

Equilibrium: At first level a Vassal of Jayem-Dea learns to never allow themselves to upset the balance of life and to protect the balance of the world, therefore, everything that they do must be done from a purely neutral and calm standpoint (i.e. no acts of genocide). As long as the character keeps to this code, they gain a kind of balance with the physical world, and receive a +1 dodge bonus to AC because of it. If the Vassal intentionally breaks this code then they loose all benefits from this class until they correct the unbalance they created and receive an atonement spell from a neutral cleric.

Mettle (Ex): At seventh level, a Vassal of Jayem-Dea can resist magical and unusual attacks with great willpower of fortitude. If they makes a successful will or fortitude save against an attack that normally would have a lesser effect on a successful save (such as a spell with a saving throw entry of Will half or Fortitude partial), they instead completely negate the effect. An unconscious or sleeping Vassal of Jayem-Dea does not gain the benefit of mettle.

Duality: At tenth level the Vassal finally understands the meaning of true balance and can shrug off the unbalanced as though it was nothing, the Vassal of Jayem-Dea gains immunity to spells with the chaotic, lawful, good, or evil descriptors.

If a Vassal of Jayem-Dea stops being neutral or intentionally does something to unbalance the world, they loose all benefits from their levels in Vasal of Jayem-Dea until they either correct the unbalance they created or return to the neutral alignment (or both if need be), additionally they must receive an atonement spell from a neutral cleric.

Playing a Vassal of Jayem-Dea[edit]

Combat: Vassals of Jayem-Dea are most commonly the main melee fighter in a group, they can play other roles with their Blessings of Jayem-Dea, but they will always find themselves on the frontline in a battle.

Advancement: Any class that wishes to become a Vassal of Jayem-Dea may do so, it's an odd (sometimes pointless) chioce for some, but it's still possible.

Vassals of Jayem-Dea can be found anywhere there is unrest in the world, whether it be a great war, or the location of a natural disaster, they will be there, doing the work of Jayem-Dea and trying to balance out the world.

NPC Reactions: The way an NPC reacts to a Vassal of Jayem-Dea depends on the NPC, if they are a man of absolutes then they with treat the Vassal with disdain or downright anger, but if they agree with the Vassals point of view on balance, then they can be very friendly and helpful.

Characters with ranks in Gather Information can research Vassals of Jayem-Dea to learn more about them. When a character makes a skill check, read or paraphrase the following, including information from lower DCs.

Vassals of Jayem-Dea in the Game[edit]

Vassals of Jayem-Dea are crusaders of a sort, seeking to keep the races of the world in balance with one another, they can be found at the frontlines of battles, fighting for the weaker side, or in a post disaster area, helping families get back on their feet.

Adaptation: Vassals of Jayem-Dea can be veiwed from any angle, they may be the hunter following the party because of the fact that they burned down an entire village, they may be the ancient, fathery figure that the characters look to for guidance, or they might be the overly helpful character who gets bogged down with tasks that their trying to do to "balance out" the world.

Sample Encounter: Gayr Sagol was born and raised following Jayem-Dea quitely, Gayrs religon was not actually something he thought about, he merely followed the diety because it was what he was raised doing. Eventually Gayr left home and went travelling, looking for glory, experiencing the world, living the life of an adventurer. He fought many battles and killed many fiends, growing close to those few who would help him. Then, one day, Gayr and his companions were delving into a dungeon that was rumored to have once been the home to a powerful force of evil, and they came across a chamber that was flodded with light that eminatted from a single figure standing in the middle of the room, a hound archon. The archon did not speak, but, as soon as it saw them, it charged, howling like some rabid wolf. Gayr was confused and could not react immediately, but when he did, he moved with unblinking deciciveness, killing the archon in a single blow. It wasn't until Gayr left that dungeon that he began to fully understand the lessons he had been taught all his life, within 2 years, he had returned home and had himself dedicated to Jayem-Dea by a archpriest there.