Just messing around with ideas, here.

This page details the Fighter, as modified to fit the Tirr setting. You may be looking for the original Fighter found in the SRD. 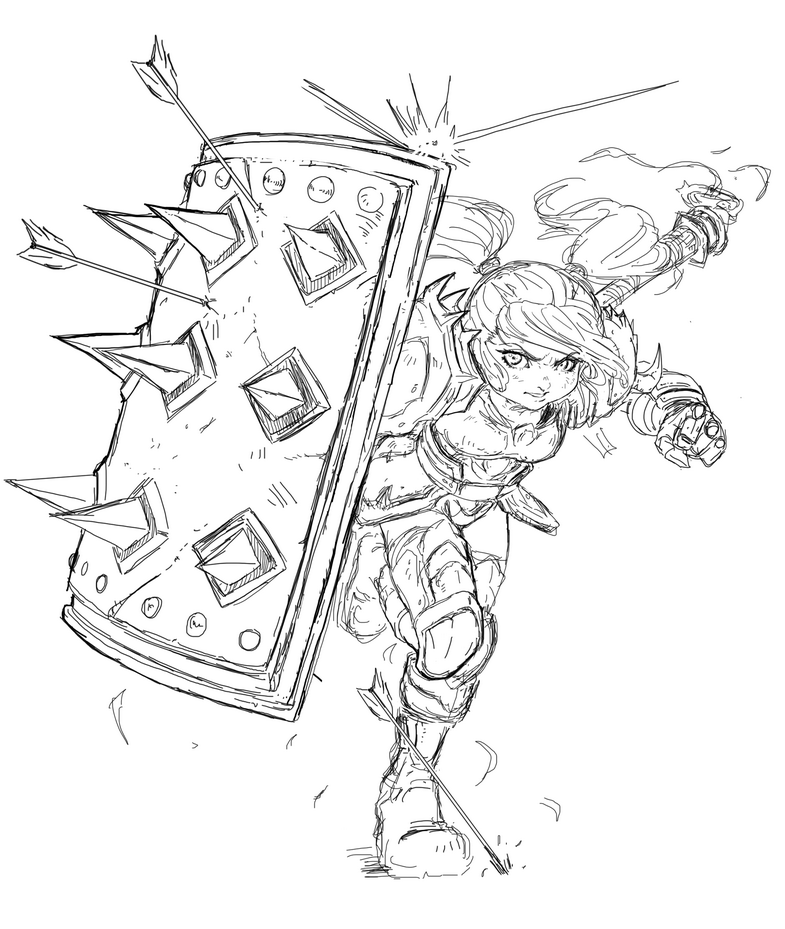 The Fighter: Resourceful, Cool under Pressure, Trained to win, or at least survive, in almost any situation

"Nobles would have you believe that battle is a matter of equal parts grace and formation. Aye, maybe... but I ain't never met a noble who could fight."

The Fighter is the dedicated warrior - one whose great experience prepares them for the chaotic nature of battle. The fighter may be the plucky young hero with unlimited potential and sharp wit, or he may be the grizzled veteran who has fought in multiple wars. He can come from almost any background, and while sometimes unorthodox in nature, he benefits from heavy training and expanded potential, and excels in his versatility.

The Fighter can occupy almost any battlefield role, depending on how he gears himself and how he prepares for the battle. While he can't quite manage the same types of magical and divine wonders as some other classes, he is the epitome of martial versatility.

Fighters can't perform magical rituals, or regularly call upon the power of their deity; They don't even attempt to tread into the realms of the mystical arts, and instead devote themselves wholly to the field of martial combat. While not as brutally efficient at destroying his foes as the Barbarian, and not as flashy or elegant as the Knight, the fighter shines in its raw potential and versatility, and his ability to contribute to the party's combat advantage in ways that other classes wouldn't dream of.

Many units receive training as fighters either before, during, or after they train to become other classes, simply because of the universal qualities of a fighter that are so appealing. No fighter is exactly the same as any other, and while there are many similarities between them, each individual is almost inevitably of a completely different discipline, schema, and capability than the last.

Races: Every humanoid race has warriors, but actual Fighters are rarer in societies that don't value logistics and planning. So while there are many Fighters among the Hobgoblins, Dwarves, and Fire Giants, a Fighter is rarely seen among the ranks of the Orcs, Gnomes, or Ogres.

Alignment: Every alignment has its share of Fighters, however more Fighters are of Lawful alignment than of Chaotic Alignment.

All of the following are class features of the fighter.

Adaptable Fighting: The Fighter is a highly trained warrior, but even more so, he's capable of adapting to the ever-changing flow of battle around him. A fighter has a limited number of special abilities that he gains access to as he gains additional levels. He can use these abilities a number of times per day equal to his base attack bonus. Any time the fighter scores a critical hit, he gains a single additional use of these abilities during that day.

Combat Focus (Ex): A fighter is at his best when the chips are down and everything is going to Baator in a handbasket. When the world is on fire, a fighter keeps his head better than anyone. If the fighter is in a situation that is stressful or dangerous enough that he would normally be unable to "take 10" on skill checks, he may spend a standard action to gain Combat Focus. A fighter may end his Combat Focus at any time to take 10 on any dice roll he makes, and if not used it ends on its own after a number of rounds equal to his fighter class level.

Feat Training (Ex): A fighter may ignore ability score prerequisites for any fighter bonus feat that he otherwise qualifies for.

Bonus Feat: At 2nd level, a fighter gets a bonus combat-oriented feat. The fighter gains an additional bonus feat at every two fighter levels thereafter (4th, 6th, 8th, 10th, 12th, 14th, 16th, 18th, and 20th). These bonus feats must be drawn from the feats noted as fighter bonus feats. A fighter must still meet all prerequisites for a bonus feat, including ability score and base attack bonus minimums.

These bonus feats are in addition to the feat that a character of any class gets from advancing levels. A fighter is not limited to the list of fighter bonus feats when choosing these feats.

Pack Mule (Ex): At 3rd level, fighters are used to long journeys with a heavy pack and the use of a wide variety of weaponry and equipment. A fighter suffers no penalties for carrying a medium load, and may retrieve stored items from his person without provoking an attack of opportunity.

Intensity (Ex): A 19th level Fighter may take an extra swift action each round.