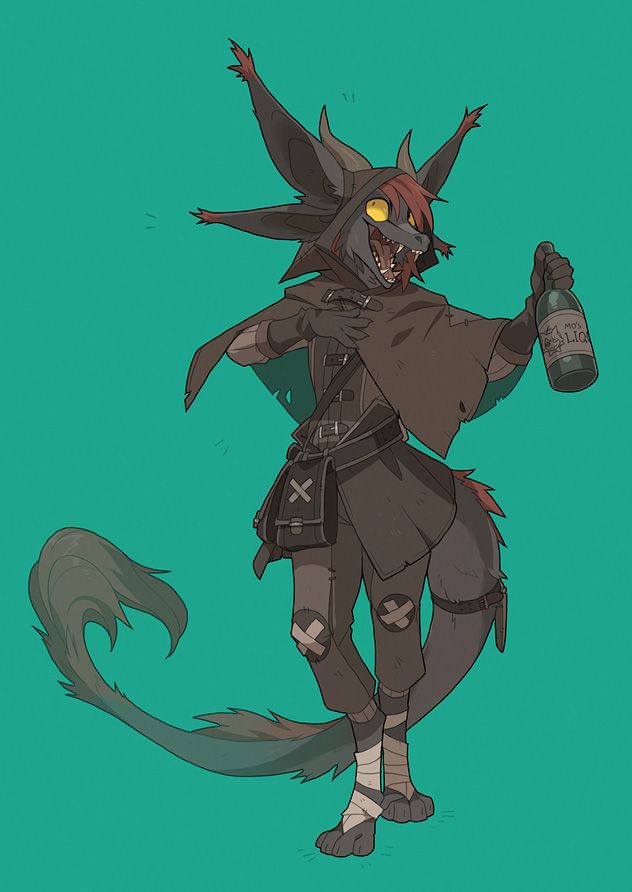 As he ran through the sewers, the Kobold dropped small ball bearings behind him, hoping to trip up his pursuer. As he scrambled up a ladder, he emerged into a street alleyway. This peculiar Kobold ran his claw through the fur on his head...relieved that he escaped the monstrous menace from below.

A Kobold with white silky fur waved her claws, and two bolts of crackling lightning began to electrocute the gaurds, thanks to her metamagic. The Kobold cackled maniacally, swishing her fur covered tail in delight.

Urban Kobolds are slightly taller than the average Kobold, and have both scales and fur. The scales are typically dark colors, like brown, black, or grey. Their fur ranges from a variety of shades of black, white, and even salt-and-pepper patterns. Occasionally, they have fur patterns similar to bats, with orange highlights.

Urban kobolds, or "Urbolds", are speculated to have come into existence when kobolds in urban societies were driven out and into the sewers as outcasts. There, they mingled (and eventually mated) with were-rats, ratfolk, and even were-bats. The result was a slightly more durable, Hardy Kobold with fur as well as scales, and developing a plethora rat or bat features, while remaining their strong draconic heritage. Highly more curious than their pureblood kin, they have their own version of the "Urd" (Winged Kobold), sporting leather bat wings on their arms.

As the kobolds were exiled, they bonded more than ever with each other, and with other vermin. They work as packs no longer with just their kind, but they exhibit oddly efficient teamwork with other creatures, finding inventive ways to draw out each other's strengths. This has led, however, to a creature that thrives with others, and suffers when alone.

Urban Kobolds often take Kobold names, and ratfolk names, or a blend of the two. They also are similar to vocalizations.

Urban Kobolds are very sociable (and apparently cuddly) creatures, and a lot more durable than normal kobolds.
Ability Score Increase. Your Charisma and con scores increases by 1 and your Dexterity score increases by 2.
Age. An Urban Kobold lives up to 200 years, much longer than a regular Kobold.
Alignment. Urban Kobolds lean towards chaotic alignments, and are seldom evil.
Size. Urban kobolds stand 3½ feet to 4 feet tall. Their tails are often just as long as them.
Speed. Your base walking speed is 40 feet.
Darkvision. You can see in the dark up to 60 feet in shades of grey.
Pack Tactics. The urban kobold has advantage on an attack roll against a creature if at least one of the urban kobold's allies is within 5 feet of the creature and the ally isn't incapacitated.
Pack Necessity. If you are in the melee range of two different hostile creatures, and you are the only one in their melee range and they are not in any other ally's melee range, you have disadvantage on saving throws forced by them and disadvantage on attacks against them.
Fluffy Soft Fur. You ignore extreme cold conditions.
Labyrinthine Recall. The urban kobold can perfectly recall any path it has traveled.
Languages. You can speak, read, and write Common, Draconic, and one other language of your choice.