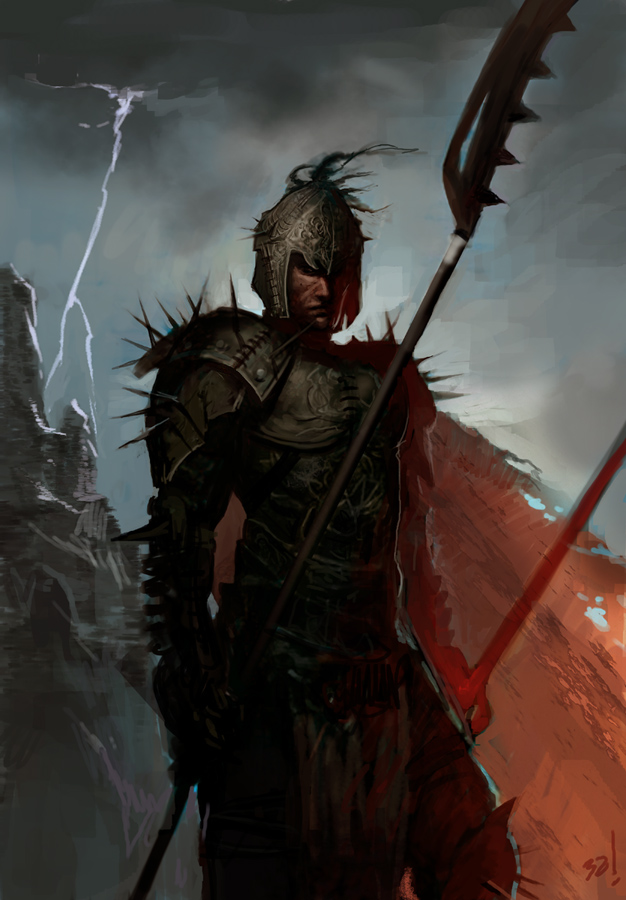 The unworthy is an unstoppable warrior, fighting through all barriers, even that of death. An unworthy is so named because they swear themselves to another, swearing to fight for them no matter what happens. An unworthy truly believes that they are not worthy to fight for who they fight for, some even believe that they are truly not even worthy to have been blessed with the honor of knowing the person they fight for.

Those who have someone they love and would never let become harmed are people who would take levels in unworthy, these people also do so for a simple reason, for more strength to protect the one they follow. The person an unworthy follows could be any number of people, a comely queen who saved the unworthy from the onslaught of a war as a child, or an ancient mage who has saved the world a hundred times in the past.

All of the following are class features of the unworthy.

Unending: An unworthy has an unbreakable will and will fight through anything, including his own death. If an unworthy drops below −9 hit points, he does not fall, though he is still considered dead for all intents and purposes, instead he continues to fight on sheer willpower alone, fighting as a dead man. While in this state the unworthy is still able to determine friend from foe and make elementary decisions, but can no longer understand language or even attempt any check that requires patience or focus. The unworthy still benefits from renunciation bonuses and from beneficial spells cast upon him, but is no longer affected by spells of the enchantment, illusion, or necromancy schools, or by spells with the language-dependent, fear, mind-affecting, or sleep descriptors. The unworthy remains in this state for either 10 minutes, or until he takes 50 points of damage, whichever comes first, the amount of damage the unworthy can take before unending fails increases by 50 points at 5th level and every 5 levels after that (10th, 15th, 20th, etc.). Unending takes effect even if the unworthy dies due to an effect that doesn't deal damage, such as with power word kill. Unending does not take effect if his body is destroyed when he dies (as it would be with the disintegrate spell), or if the unworthy is unaware of the world around him when he drops below −9 hit points (as he would be if he were asleep).

Fearless (Ex): At second level an unworthy teaches himself to never back down, to face whatever comes before him without flinching, becoming immune to all fear effects.

Power Surge: An unworthy is capable of bringing forth strength that few others have ever witnessed. Starting at third level an unworthy gains the ability to take a move action and make a Concentration check (DC 10) to raise his Strength score by 8 points for a number of rounds equal to half of his character level. The unworthy may attempt this check any number of times per day, but each additional time he attempts it after the first raises the DC of the Concentration check by five (to 15 the second time he attempts it, 20 the third time, 25 the fourth, etc.). This Concentration check requires the unworthy to be able to focus in order to be made.

Nameless (Ex): An unworthy fights not for themselves, never does he fight for himself, and in turn, his name slowly fades from the minds of those who know of him. At eighth level an unworthy is considered always under the effects of a mind blank spell. Additionally, the unworthy gains the lawful subtype, making him able to overcome damage reduction as if his natural weapons and any weapons he wields are lawful-aligned.

Very few people ever actually walk the path to becoming an unworthy for it is one that requires unconditional loyalty to another. In order to become an unworthy, a character must take an oath to follow an individual person. This oath need not be formal, it can be merely a promise made for that persons ears alone, or even an silent resolution made by the character, but regardless of how the oath is taken, it is always takes a similar form to, "I will follow this person to the ends of the earth and beyond". After this oath is taken, the character becomes an unworthy (if all other requirements of the class are met), and remains an unworthy as long as he adheres the following code of conduct:

If the above code of conduct is broken, then the unworthy looses all benefits of the unworthy class until they are forgiven by the person he has sworn himself to, and he forgives himself.

Note: The unworthy is an extremely powerful prestige class that may be difficult to constrain if the need arises, and so, it comes with a few ways for the DM to hold the class back or undo it if need be. For example, if the DM doesn't want the unworthy to take a certain action, all they need to do is think of a reason for the person the unworthy follows to not want them to take that action. Another possibility is, in case the character with levels in unworthy is abusing the power given to him, the DM can throw a curve ball, and have the person that the unworthy follows to ask the unworthy to turn away, or run, to leave her to die. In such an instance, no matter what the unworthy does, he breaks the code of conduct listed above. There are many variations of this, but, just keep in mind that these counters should only be attempted if the class is getting out of hand.

Combat: In battle, an unworthy will find himself at the front lines, crushing his enemies with impossible strength and an unstoppable finality. An unworthy will always fight if something threatens the person they have sworn themselves to, even against undeniable odds, for it is simply what they exist for. In battle an unworthy is a terrible force to behold that has been compared to the fury of a god.

Resources: An unworthy usually has access to several different assets and contacts in his world, for people may recognize him for who he is, and what he does, and offer him assistance. The person the unworthy has sworn himself to and the ones close to that person are also almost sure to provide the unworthy with any help he may need, though this may not be the case if the unworthy has made the oath he took a secret, or he swore himself to an evil or cruel person.

An unworthy is a tireless warrior, one who will never dare back down, not until all is lost, even his own life. In as much, someone who walks the path of the unworthy will be found wherever that path takes them. While this path can take the unworthy to any number of places in this world, they will always follow it without wavering, remaining solid to the path that has been set for them.

Characters with ranks in Knowledge (Nobility and Royalty) can research unworthies to learn more about them. When a character makes a skill check, read or paraphrase the following, including information from lower DCs.

Truthfully, an unworthy is the path for someone who wishes to make any sacrifice they make count, for an unworthy will not back down until the end has truly come; until their body can no longer withstand the punishment it must suffer. Most commonly in the world an unworthy is the crusader, the honored guardian, and the enforcing hand, although they have taken other rolls in the past as well.

Adaptation: An unworthy could fit many character rolls, from the fanatical follower of a dark tyrant, to the shining beacon of the coming order of the light. An unworthy could be a priest, who has fallen in love with the goddess he prays to, or the rogue who made a promise to someone, and who intends to keep that promise. The unworthy can be sculpted to be the steady rock to whom the people rally to, or even the usurper to the nation, leading his new queen to the throne and killing everyone along the way.

Once, Juliette Troubal did not believe in the power of faith or the strength of love, she believed your life was carved out of your own personal power, and no other force could help to shape it. She had lived her life working as a farmer, her sweat and her blood feeding the soil which she was given. Her life was steady, an unbreakable constant, until one day, the war came, and her farm was taken by the enemy, her crops rationed out to their army, and foreigners tilling her land. She was beaten by those men when she tried to stop them, and she was thrown into a cage under their custody. Horrors were enacted upon her in the months that followed, most of the men joked about how having a woman around was a good change, oh how she wished them an excrutiating death. So she lay there, rage building in her mind, until she could think of little else, and it would consume her mind every night as she fell asleep. Then there was fire, screams in the night, and cries of fighting, and then Juliettes cage broke, and she fell to the ground, cutting her leg as she fell, blood pouring thickly to the ground, she didn't stop to think about it, she merely scoured the ground and found a discarded sword, stood back up, and stared out into the darkness that surrounded her, punctuated only by fire and silhouttes, and who was the first person for her to see but the man who had thrown her into the cage himself, she stepped forward shakily on her bleeding leg, and tried to gut the disgusting man, but he was better than her, he had seen a thousand battles, and she had a weak leg. He had her on the ground before she even knew what was going on. He moved without mercy and was about to kill her, but then his head was gone, and a woman was standing there, a woman in the green and black clothes of an officer. Many men died that night, but Juliette lived. She was taken on by the officers, but she remained with the woman only, still being afraid of the men, still slightly afriad of the world, but she remained calm enough for them to dress her wound and eat some, but she soon learned that the woman who had saved her was actually the leader of the officers. She was given the option of taking her farm back, but she declined, her didn't want it, instead she joined the officers, even if only for the matter of being able to protect the woman who had saved her without a second thought.