Uniborns are medium humanoids who have descended from unicorns, they share some physical traits to unicorns, most notably their horn, they also often have colorful eyes and hair,and have fangs and a tail, for the rest they are very similar to other humanoids. Uniborns are around 7'5ft (225cm) tall , but can up to 9 or as short as 5 ft tall, they are more often than not physically bulky, but this is not always the case. Uniborns almost always have long hair, for their hair holds magical properties, uniborns also always use fur somewhere in their clothing, this can be as much as a cloak or skirt, or as little as a eyepatch or belt, they seem to wear fur for cultural purposes. 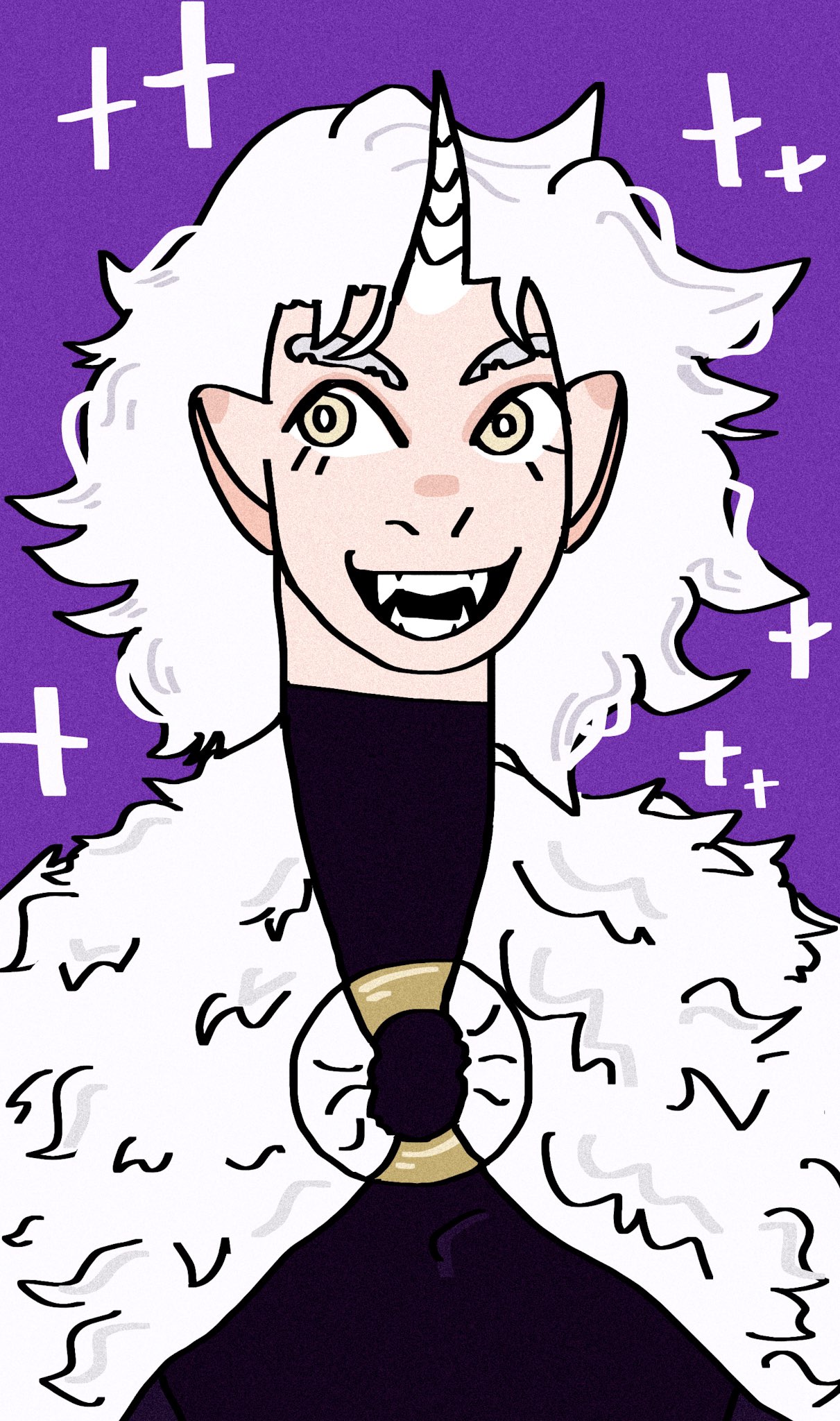 Uniborns have been around since antiquity, they are very seldom seen by any other race, leading some races to believe that uniborns are nothing but a myth. Uniborns don't have just ONE history, for they life in small herds each with their own variations of a bigger culture, making their history different per herd. The most common traits in these subcultures include the practice of rituals for deities, which they thank for their magic, and wearing fur as a Vestments, they believe that not wearing fur will lead to misfortune.

Uniborns live under a very simple society, the uniborns with the strongest magic are respected the most, often taking the place of herd leaders, uniborn leaders almost never give up leadership on their own accord, and participate in magic duels for leadership. These often lead to injuries or even death.

Uniborn herds toll often around 300 uniborns, but this number can vary mildly.

Uniborns are mostly peaceful creatures though, and their society is comparable to the ones of elves. They live in secluded places, almost always magically strong places such as mountains. Uniborns rarely mingle with other races, they seclude themselves to their herds in their environments, and live in harmony with the surrounding nature.

Uniborn names often reference mountains, rivers, forests, or constellations, but in some cases uniborns are named after the deities their parents worship, Uniborns do not have feminine or masculine names, for example both a male or female uniborn can be named Andromeda.

Humanoid descendants from unicorns who's existence is seen as a myth.
Ability Score Increase. Your Charisma score increases by 2 and Wisdom increases by 1.
Age. Uniborns mature way slower than humans do, for each 1 year a human ages it would take a uniborn 10 years to age the same amount, uniborns mature around the age of 200, and can live up to be as old as 1100 years old.
Alignment. Uniborns almost always fall within the neutral alignment.
Size. Uniborns are medium in size, they can be as short as 5´5 ft (165cm) short, or up to 9ft (275cm) tall, but are most often around 7'5 ft (226cm) tall.
Speed. Your base walking speed is 30 feet.
Keen Senses. Uniborns are very aware of their surroundings, they have proficiency in the Perception skill.
Lucky. Uniborn hair is lucky, incredibly so. When rolling a d20, if you roll a 1, you may reroll the die, taking the new result. You can do this once, and regain the use on a long rest.
Protection from Poison. Uniborn horns are said to magically cure all ailments, as an action, a uniborn can touch another creature with its horn. Doing so ends the poisoned condition on them. You can do this once, regaining the use on a short rest.
Magically Inclined. Uniborns are born with a strong sense of magic. When casting a spell, if you roll a die that isn’t a d20, you can maximize the result instead of rolling that die. You can do this once, regaining the use on a short rest.
Languages. Uniborns can speak, read, and write Common and Sylvan.