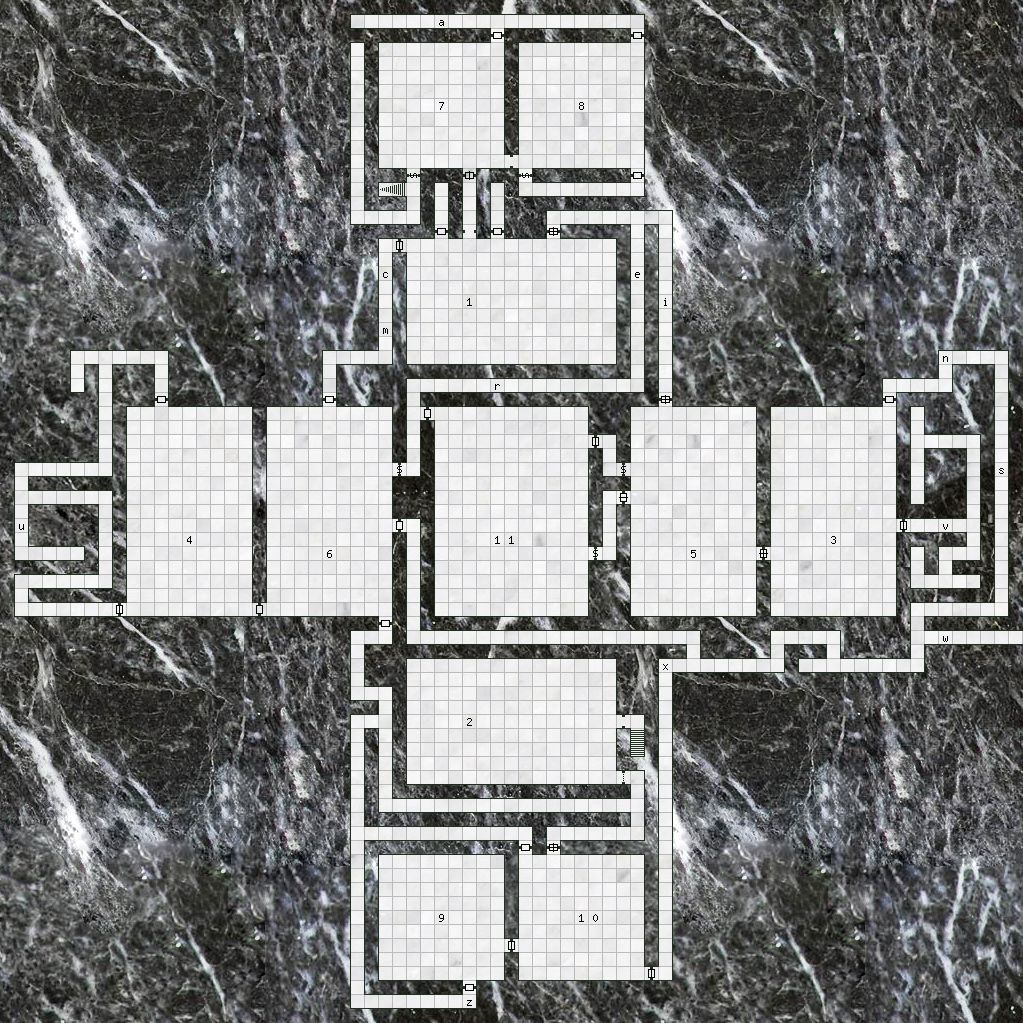 Full of Treasure and loot

Previously the characters have already completed the "cavern of bandits" and "the hunt for the grootslang", they were basically guided to this Temple by Al-Zayd, A Magi Vizier from the Sultanate of Quajjari from the Oasis Caravanserai. The Djinn of the ring has guided the players to this location to find his powerful lord, the Djinn Sultan.

The Tomb of Qa'a is a vast tomb built into the sands and mesas of the Al-Fakhim desert. Players will encounter strange servants and artifacts that are governed by subtle scientific laws of nature and mathematics.

A Massive sandstorm could drive them in or even a swarm of massive grootslang (purple worms/sand dragons) chasing them towards the Cavern entrance of the great Tomb.

So the Tomb of Qa'a is shaped like a vast cross with four wings/chambers and one central chamber. The players must either solve a mathematical formula to appease and shrine and unlock one cardinal direction of the shrine to unlock the center... which might house the legendary "Censer of the Sultan".

The shrines are up to the DM's discretion of exactly where they will be located.

Northern Wing (Earth): Rooms 7,8 and 1 are the northern rooms and the shrine of earth is located in the Northern wing in one of those rooms. The Question is "What is the Volume of the pyramid of Ivory in Suqqatra? we know that height is 50% more than the base but we only know that it's square base is 250 meters long on each side. Formula: V=(lwh)/3". The Northern Wing has writing on the walls and if translated (Arcana Cr. 17) it will reveal the story "The betrayal of Set and the Vengeance of Horus" 2000xp. This wing house 1d6+2 Dhuga with two Dhuga Magi and this room can have deep spike pits or crushing traps to knock heroes into.

The Left Wing (Western or Air): 4 and 6; in one of these rooms is the Shrine of Wind and the question in this shrine is "If the eye of the storm is a square kilometer, using fibanocci sequence calculate the ultimate dimension of the storm to the 17th place. Fn then N=17th" The writing on the wall will translate a story (Arcana Cr. 17) "The Heretic Akhenaten" 2000xp. The Boss of this Area is 2 Comazotz with 2d6+4 Chupacabra and all deadly set of spike pits.

The Right Wing (Eastern or Water): 5 and 3; One of these rooms has the shrine of water and the question is "It is said one of the moons of the planet of Ishtar, known as Tethys is a great sphere of ice 10,000 kilometers wide from side to side. Calculate the Volume of this great Sphere; hint V=(3/4)(r^3[Pi])." The Writing on the wall (Arcana cr. 17) will reveal a story "The Victory of Set, Osiris and Amun Ra over Apep" 2000xp. The boss of this wing is a Grootslang with 2d4+2 Stone Ushtabi and possibly a pool of acid water.

The Southern Wing (Fire): 2,9 and 10; The Shrine of Fire is located in one of these rooms and it's question is "If a hole has been carved at the top of a tomb in a burning hot desert and the tomb is 200 meters deep and the circle is 20 meters wide, what is the volume of burning hot sunlight inside the tomb during the Zenith of the day. Hint: V(r^2{Pi})." The Writing on the wall (Arcana cr. 17) will reveal a story "The Victory of Ramses II over the Hyskos" 2000xp. The Boss of this Wing is two Brazen pulls with a tar pit trap and 1d6+2 Iron Ushtabi.

The Fortified Center: room 11; this has to be unlocked from all the Wings and the Questions at the Shrines. Once unlocked the "Censer of the Sultan" can be found either placed in a central pedestal inside a vast treasure room or the artifact has been taken and only a letter is in it's place saying "Al-Zayd is not to be trusted, she is actually working for Soumaoro the wicked Sorcerer King who now dominates Walata and Njani. I am the rightful heir to Walata and he is usurper. Come and find me in the oasis of the moon's horns in El-Nagi. Burn this letter! I am known as "Sunjata the White Lion".

These traps should be considered equivalent to the players challenge rating to disarm. Dm should use these traps liberally in the corridors.

!Clear Glass Bridge! Dc. 17 Intelligence save or character must make Dc. 17 Dexterity save, if they fail both they fall 50 feet and take 10d10 bludgeoning damage. (Can easily be solved by using sand or flour! lolz)

The Rooms in turn are inhabited with monsters that should be a challenge for level 6 to 7 characters. Demi-Golems (half golems) known as Ushtabi populate the various rooms and they have elemental weaknesses specific to the material they are crafted from, hence Iron Ushtabi have acid weakness, while stone ushtabi have Thunder Weakness. Fire breathing Kongamato live in the rafters or swim in pools of water, Brutish Dhuga patrol the dungeon sometimes supported by their powerful Dhuga Magi (cr.10!) who can reflect spells and use mind blast. There are more savage lizardmen known as Sobeki who are deadly skirmishers and fight with two sabers called khopesh (Cr.2) that frequently populate the dungeon and are weak to cold. A evolved form of black pudding crawls on the walls and shoot acid at enemies from their vantage point. Swarms of Tomb Scarabs will leap onto Ushtabi and repair them will dealing lightning damage to enemies who fight their Ushtabi allies in battle.

If the DM allows players to find the censer of the Sultans then they can meet Ahmid al-din and go north to Quajjari if they do not find it and it has already been taken then they must head east to El-Nagi.

The Treasure trove should have at least 100,000gp and a bonus 20,000d100gp worth of treasure in gems, gold, silver and other expensive artwork. There can also be 1000d4 semi precious gems and 300d4 precious gems found in this massive treasure cash. Basically this is enough gold to make the party very rich and allow them to go back to Femerf the rune smith and have him enchant their gear to the max level. Various powerful Numerology stones could be found in the Tomb of Qa'a that could easily magnify the spells and attacks of players through mathematics but they were fickle and difficult to attune with. These Numerology Stones are listed below. Each Elemental shrine should have 1d4 Numerology stones.

Rune of II, Rune of III, Rune of IV and Rune of V can be found in this Dungeon especailly after a boss fight near at the elemental shrines.

The Players will defenitely find minimum of 100,000gp in the great treasurey of Qa'a plus much more gems and gold. Also Numerology stones should drop at least 1d4 per Shrine of each of the elements.

The minimum total award for each character participating in this adventure is X experience points.

The maximum total award for each character participating in this adventure is X experience points.

Numerology Stones and the Censer of the Sultan[edit]

Qa'a was a pharoah who could speak the greater god IO and was given a gift over the very space time fabric of the multiverse... the ability to create stones which modified the forces, energies and matter of the universe but based on mathematical laws. Many of these stones can be found throughout the Tomb and they can be used once a day to greatly modify spells, attacks and enemies. These Stones are Numerology stones.

The Censer of the Sultan is a censor which when placed with burning incense and is in close proximity of the Djinn of the ring (50 ft.), summons a very powerful Djinni Sultan who can grant three wishes to the user but only once in their lifetime. If one of the wishes is to free the Sultan then the censer crumbles and the Djinni Sultan thanks the players (100,000xp) and flies on his way to the stars beyond. Though if someone wishes for all the powers of the Sultan they will quickly be morphed into a Efreet Sultan and imprisoned as a slave inside the censer, forver forced to give three wishes to whome-ever is their master.

Both Al-Zayd and Soumaoro will discover the eventual double cross and the players will eventually have assassins and mercenaries tracking them throughout Gondwana.

Both Sunjata and Ahmid will give their loyalty to the heroes and the freedom fighter throughout the land will join help the heroes and give them sanctuary in the desert oasis.

Each character receives 30 downtime days at the conclusion of this adventure.