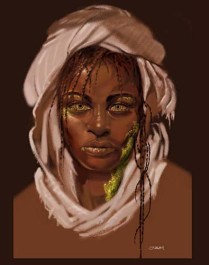 A Tiberium mutant is an organism that has been eposed to copious amount of Tiberium radiation, enough to cause fundamental changes to the creature's DNA structure. They are immune to Tiberium radiation, and are in fact healed by it. Mutants tend to be somewhat stronger than the average of their species and are usually better coordinate. However, mutants are also more sickly than the average member of its species, due to a number of usually benign tumors and a compromised immune system.

Only Humanoids can use this template when they become a Tiberium mutant (For other organisms, use the Tiberium Mutant Template (Non-PC)). A mutant is created after exposure to 3,500 REM of Tiberium Radiation. However, six months after they have become a mutant, there is a 75% chance the Tiberium inside their body will begin to grow uncontrollably, dealing 1 point of Constitution drain every two weeks as Tiberium begins to encroach on their internal organs. When they are reduced to one point of Constitution, they are rendered helpless, wracked with pain as shards of Tiberium pierce throughout the individual's body. When the Constitution reaches zero, the mutant is dead. Once Tiberium has begun to grow uncontrollably, it is nearly impossible to save the mutant, though rare medical procedures may be available. Those born to mutated parents are always mutated in the womb, though there is no chance for Tiberium to begin growing uncontrollably in someone who was born a mutant.

Tiberium-based Metabolism: A Tiberium mutant is completely immune to Tiberium sickness caused by exposure to Tiberium radiation. In fact, they heal 1 point of damage for every 1,000 TREM absorbed. They also gain 5' to their base speed while exposed to radiation. A mutant may also eat food that contains small amounts of Tiberium.

Magical Resistance: A Tiberium mutant generates a low level amount of Tiberium radiation, though not nearly enough to be measured on the TREM Scale. This amount of radiation is enough to grant Spell Resistance 10. Note that this spell resistance does not stack with that of other sources

Sonic Vulnerability: A Tiberium mutant takes +50% damage from sonic attacks, such as Shout.

Mutants are often stronger and more dexterous than the average member of their species, thanks to the infusion of the Tiberium radiation into their musculature and nervous system, though not by much. However, mutants are plagued by a variety of Tiberium-induced tumors and cancers, leaving much to be desired in their health.

+2 Knowledge (Tiberium), since they have an innate understanding of Tiberium

Generally, Tiberium mutants live in slums with other mutants. Some mutants live in the harsh Red zones, testing their skill and (more importantly) avoiding all nonmutants.

As base creature, though many mutants tend toward a nuetral outlook. They just want to live their lives.