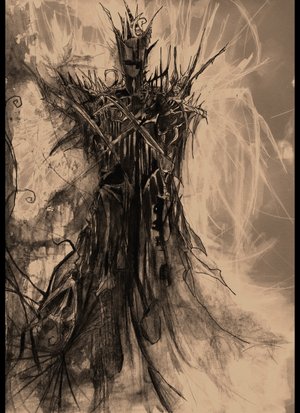 One of the many aspects of the Nihilith

The existence of the Nihilith is, in nearly every sense of conventional logic, utterly impossible. It follows no rules, nor can it comprehend them, yet is utterly calm and collected. It has no care for the matters of good or evil, yet watches the world with intent. It isn't even a true deity, but instead a sort of anti-entity, a being that exists merely as an analogue for a certaint way of thinking. Without thought yet with it, existing yet not existing, the Nihilith is an eternal contradiction in it's very matter of reality.

The Nihilith has no actual dogma, seeing as it does not truelly care for the matters of good or evil, of right or wrong. Though it is this nature that draws in its followers, who instead of worshipping the entity out of a wish to worship a higher being, they instead worship it because they themselves no longer care about what is right and what is wrong. This nature does not necessarily make it's followers evil, but rather merely uncaring and numb to what they do.

The Nihilith has no temples, nor would it ever wish to have any constructed. Not to mention it's followers usually worship it silently, not trying to bring others over to it's cause, seeing as it doesn't have one. The Nihilith is an extremely passive entity, not usually involving itself in a struggle, and not even able to be affected by a struggle that is brought to it. Though due to it's paradoxial nature of anti-existence, a cleric who worships it can dip into it's contradictory "power" at any time, much in the same way a cleric of another god recieves power through prayer.