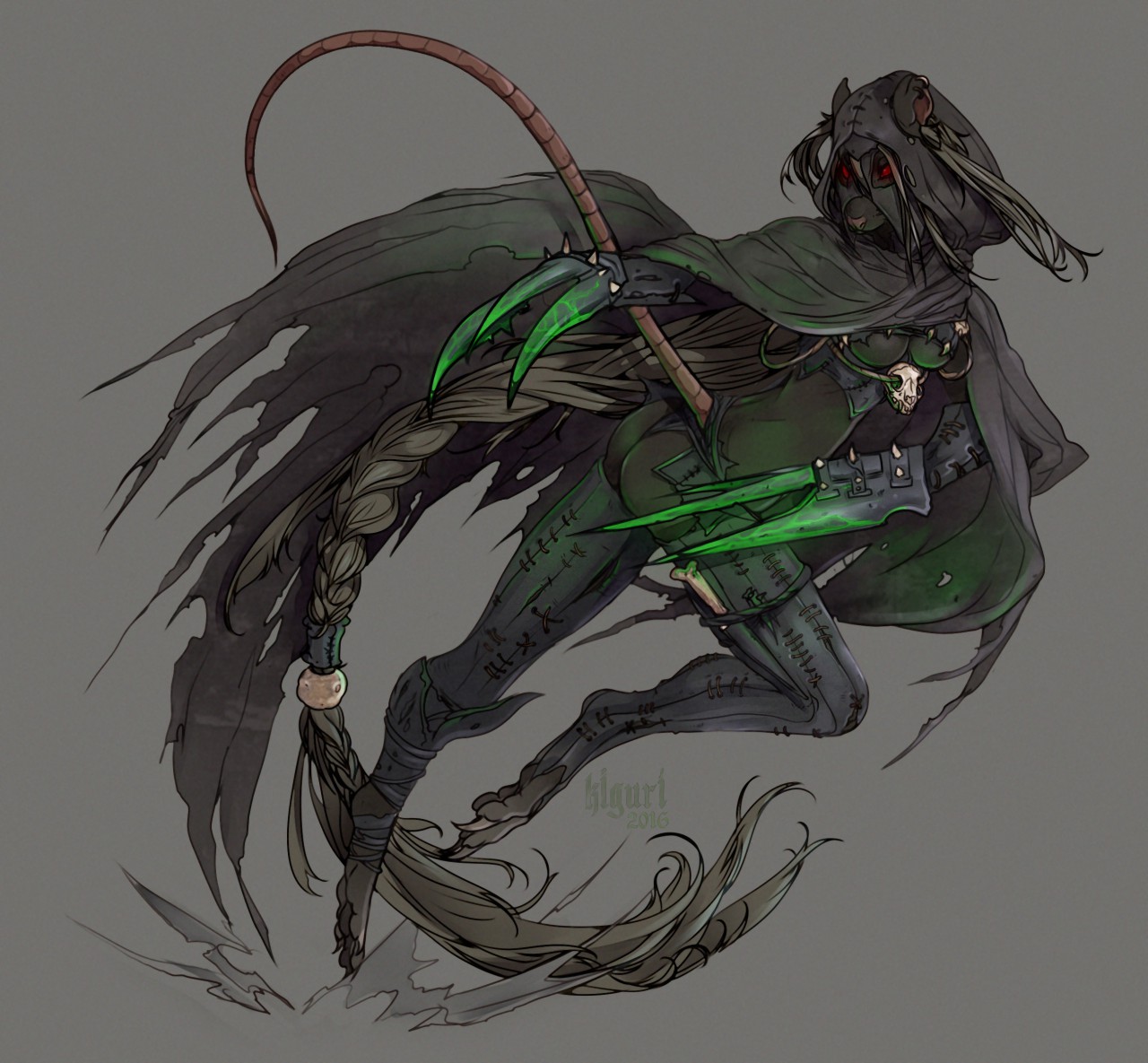 A Tesso rogue by Kiguri

Tesso have the lithe proportions of an elf, mixed with the fur, claw, and tail of a rat. Their fur comes in all shades of blacks, whites, and browns. Said fur can be of varying texture, some being coarse and matted, while others are silky and soft. Tesso often have their eyes colored red, either just the iris or the entire eye save the pupil. The tesso also have their faces somewhere between those of a rodent and elf. Males often display more squared jaws and overall features, while the females tend to have more gentle curves to them. All tesso are born with a tail that is between half to double their body length, varying between individuals. All tesso tails are however entirely bereft of hair of any kind.

The tale of the tesso is one of desperate hubris. The tesso were born of the mind of one Vermillion Caestus, a drow who saw the web that Lolth tangled his people in as the source of the drow’s continued exile to the Underdark. Vermillion would go on to establish the Children of Ember Webs in order to convert more to his ideology and to gain greater wealth and power for himself while dodging the ever vigilant eye of the priestesses of Lolth. After countless centuries of toil poring over tomes upon tomes of lore and arcanum from around the Underdark and smuggled from the World Above, the Children finally found a rival power strong enough that would liberate their kind. The Abyss holds many a horror, for it is the pit that Lolth dragged herself from. While Lolth may now be a full goddess, there are still many in the Abyss who remember her days as a demon princess and wish to see her deposed. It was then, with the aid of Zuggtmoy, the old nemesis of Lolth, that a bargain was struck.

New forms were given to the Children, powerful enough to withstand the influence of the spider. But as the eleventh hour struck, the impulses of the drow reared their ugly heads and Vermillion tried to backstab Zuggtmoy and steal her demonic power for himself. The ritual had been complete enough for the Children, but they were now vulnerable without the protection of Zuggtmoy. Lolth decided to leave them free, but enact a horrific curse upon them as punishment. She cursed their forms to mirror their master: a cowardly rodent. And as the dust settled and the new race of tesso cried out in anguish at their loss, for their beauty. Their elven heritage was all but eradicated from them. Most went mad and flung themselves at the mercy of death. However, some persisted in spite of their new forms and failure. They would find themselves the beginnings of the great clans that would mirror the noble houses of elvenkind, and they headed to the surface to try and escape the drow that sought to hound them and slaughter them in the name of their goddess.

Tesso society is one that has only existed for a few short centuries. As such, they have yet to compose the great volumes of lore and law seen in the older species. The tesso do have one advantage conferred by their new forms that their elven ancestors could never dream of: a sense of mortality. Tesso do not live for the millennia as elves do. As such, the tesso have unrivaled ambition that perforates the very essence of what it means to be a living creature. With such incredible drive, they were able to multiply rapidly and expand across the Material Plane, setting up wherever they were allowed. Because of their newness and rodent features, they are often shunned by other races, but they take this in stride, as they would rather get dirty looks than knives in the back. Tesso are ruthless in the pursuit of resources and power, both physical and arcane, in order to better secure their races' future. To better weather the storm of tumultuous survival, the tesso's clans have become the basic and de facto leaders of their race. Their clans are loose organizations that keep tesso under their jurisdiction in communication with others of their race and step in to negotiate with other political bodies on behalf of individuals or families. While tesso have no issue stealing from others, they are mostly civil among each other, as they all share the weight of the world’s scorn together.

The Tesso have no set naming structure. However, many choose to give their children elvish names in remembrance of their origins.

Drow turned ratlings
Ability Score Increase. Your Dexterity score increases by 2, and your Constitution score increases by 1.
Age. Most tesso are born into lives of desperate survival and prejudice. Because of this, though a tesso can biologically live to be about 100 years of age and mature at around 20, many will only make it to about 60 years old.
Alignment. Because of the nature of their creation, most tesso are true neutral or chaotic neutral simply as a reaction to the world they live in, as the base instinct of a tesso is to survive as long as possible. There are, however, some tesso, particularly those heavily involved in the Clans, that lean towards lawful good as they try and use diplomatic and official channels to better the lives of their kin.
Size. Tesso are shorter than the drow they were once, standing more along the height of the average human. Your size is Medium
Speed. Your base walking speed is 30 feet.
Darkvision. You can see in dim light within 60 feet of you as if it were bright light, and in darkness as if it were dim light. You can't discern color in darkness, only shades of gray.
Cornered Rat. You have excellent instincts and fight or flight reactions. While you are frightened, you ignore difficult terrain.
Dark Inheritance. The remnants of drow blood within you allows you to dip slightly in to the magics that were meant to be your kinds' birthright, albeit in a warped and more base form. You know the dancing lights cantrip.
Rodent Blood. Like all of rats and mousekind, you are swarthy and sneaky. You are proficient in the Stealth skill.
Cowardly. Your instinct teaches you to obey fear. You have disadvantage in saving throws against being frightened.
Languages. You can speak, read, and write both Common and Undercommon.

When creating a tesso character, you can use the following table) of traits, ideals, bonds and flaws to help flesh out your character. Use these tables in addition to or in place of your background's characteristics.