The burly man paces through the door of the bar. As he methodically moves through the crowd, his face ambiguous and stoic, others gaze on in confusion. Bare naked, unspeaking, he approaches a confounded man in a leather jacket, scanning him up and down. Breaking the silence, the man speaks plainly. “I need your clothes, your boots and your motorcycle.”

Terminators are synthetic humanoids, robots, which bear a great resemblance to human skeletons. With high quality steel bodies, and bright red eyes, they are a terrifying sight to behold, at least, for those without flesh. Some terminators, through farming and harvesting of human bodies, are granted a sheath of real human flesh. Some higher tech versions are instead made of liquid metal, capable of adapting and shapeshifting in horrifying fashion. 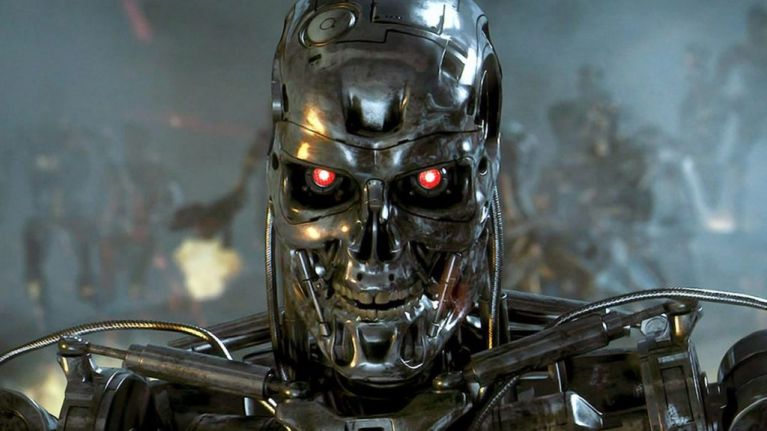 A T-800 Terminator without synthetic flesh. From Terminator 3: Rise of the Machines.

After Skynet became self aware after only a month online, and the nuclear holocaust it had caused when it’s creators attempted to pull the plug, it started developing living weapons, made to root out the rest of the survivors. Adapted from Cyberdine’s old models, the Terminator was, in essence, a mass produced foot soldier. As smaller units, they were able to guard larger vehicles with their higher maneuverability, or enter tighter areas without losing functionality.

However, as the war against the rebels progressed further, foot soldiers were not enough. Given rubber skin, and more human shapes, they were made to infiltrate the bunkers and root them out. These versions were discovered quickly, and to counter, Skynet developed them further, grafting skin onto their bodies. These were much more functional.

Terminators are nothing but an extension of Skynet’s will, and those which are removed from it are so few and far between that a society of them would be impossible. Even then, integrating into society would prove even more difficult, as even if they can learn, humanity is a far stretch, though not unattainable.

Terminators have no names as we know them, they are often referred to by their unit designation. However, some Terminators that have their learning computer activated have been known to choose a name.

Hunter-Killers, designed solely to eliminate.
Ability Score Increase. Your Constitution score increases by 2, and your Strength by 1.
Age. While the nuclear power source inside them lasts 120 years, if replaced, they are functionally immortal.
Alignment. As machines, they are as close to lawful as it gets. While their actions may paint them as various shades of good or evil, those uncontrolled by Skynet are likely more neutral than anything else.
Size. Made to look human, their sizes are fairly similar, though dependent on their model. While all T-800 model Terminators are 6’1”, and weigh 400lbs, the proportions of other models vary. Your size is Medium.
Speed. Your walking speed is 35 feet.
Construct. Your creature type is Construct, instead of Humanoid. Spells and other effects that specifically target humanoids, like crown of madness, cannot target you.
Mendable. When the mending spell is cast on you, it has the following alterations: It has a casting time of 1 action. If you have 0 hit points you become stable. As part of the casting of mending the caster may expend any level of spell slot to cause you to regain a number of hit points equal to 1d8, plus their spellcasting ability modifier. For each level of the spell slot expended you regain an additional 1d8 hit points.
Thinking Machine. You are immune to diseases, poison damage, and the poisoned condition. You do not need to eat or breathe. Instead of sleeping, you enter an inactive state. Being in this state for 4 hours is equivalent to an 8 hour sleep for a human. You do not dream in this state; you are fully aware of your surroundings and notice approaching enemies and other events as normal.
Powerful Build. You count as one size larger when determining your carrying capacity and the weight you can push, drag, or lift.
Durable Frame. Your body is metal, and even the strongest hits may bounce off it. When you aren't wearing armor, your AC is 12 + your Dexterity modifier. You can use your natural armor to determine your AC if the armor you wear would leave you with a lower AC. A shield's benefits apply as normal while you use your natural armor.
Massive Punches. Your entire body is a natural weapon, which you can use to make unarmed strikes. If you hit with them, you deal bludgeoning damage equal to 1d4 + your Strength modifier, instead of the damage normal for an unarmed strike.
Comprehensive Files. When making a skill check for a skill you are not proficient in, you may choose to count as if you were proficient. You can do this once, regaining the use on a long rest.
Languages. You can read, speak, and write Common.

When creating a Terminator character, you can use the following table of traits, ideals, bonds and flaws to help flesh out your character. Use these tables in addition to or in place of your background's characteristics.

Not all games are played wanting infiltrating terminators. If you deem it necessary, add this racial trait to the traits of the Terminator.

Infiltrator. As you appear human, it may be hard for others to tell you apart. If someone does not know that you are a terminator, upon interacting with you, they must make a Wisdom (Insight) check contested by a Charisma (Performance) check by you. On a success, they can tell something is wrong, although they likely don’t know specifically that you’re a terminator. A creature that deals more than 10 damage in a single hit to you, or sees you take this damage, rolls this check with advantage, and can tell you’re a terminator, even if they don’t exactly know what that is.

This race assumes you’re a T-800, using false skin. Due to the potential want of having other terminators playable, and how some really don’t work as feats, they go here. To play one of these, add their traits to the racial traits of the Terminator. Doing so bars you from other Terminator feats.

To avoid wasting space, you may just opt out of skin, making you ineligible for use of Infiltrator.

As a remarkably unadvanced model you are unable to perform any infiltration that requires you to blend in with humans, and have no outer sheath of skin or rubber.

As an early Terminator model, your skin is made of rubber as opposed to organic flesh, and your frame is much larger.

Built-In Weapons. At character creation, you may replace one of your arms with a nonmagical ranged weapon of your choice. If this weapon has the two-handed property you must hold it in both hands to make attacks with it, and if doing so still gives you disadvantage when using it, you cannot choose it, but otherwise there are no limitations. This does still require ammunition.

An advanced Terminator designed as a sleeper agent by Skynet, with a human mind and heart built in.

Sleeper Agent. At character creation, choose one or more specific events(you meet a person, you reach a certain age, you find a certain object, you reach a certain threshold of hitpoints). Until this event occurs, you do not need to make checks for Infiltrator, although if you take more than 10 damage as per the trait the check still needs to be made. However, while you are still a sleeper agent, you are unaware you are a terminator, and cannot use Comprehensive Files.

Only one Racial Feat may be chosen when playing as a Terminator.

Instead of real skin and a metal frame, you are solely made up of liquid metal. Your height can change but should fall around 6 feet tall and 300lbs.