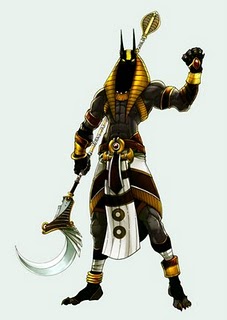 -Focus on Dual-Weaponry and Halberds

-Restricted to their gods alignment/code of conduct.

Abilities A temple guard is a good skirmisher, who can deal a lot of damage in a burst, but cannot sustain damage for too long. They are weak in hit points, so taking Toughness might be a good idea. They utilize both Strength and Wisdom heavily, so specialize in those.

Temple Guards use powers both natural and unnatural to cut down their foes in the name of their gods. All of the following are class features of the Temple Guard.

Pious Strike: A melee range attack that deals weapon damage, plus 2 damage. This damage increases by 1 every other level.

Enter the Fray: Beginning at 2nd level, whenever you enter combat, the first time you attack you deal an extra 3 damage. This increases by 2 every other level.

Locust Swarm: Beginning at 3rd level, the Temple Guard gains the Locust Swarm ability. Locust Swarm does 1d8 damage, and applies the Ancient Plague disease. A target already diseased can not be the target of Locust Swarm.

Endless Torment: Beginning at 6th level, if you deal damage to a diseased target, you deal an extra 5 damage.

Sweeping Strike: Beginning at 6th level, the Temple Guard gains the Sweeping Strike ability. If you successfully deal damage to a target that is diseased, you may instantly hit another target within 5 yards. The second target gains no diseases. If you use Sweeping Strikes, you cannot use Flurry of Blows.

Locust Swarm R2: Beginning at 7th level, Locust Swarm now does 1d12 damage, and applies the Ancient Plague disease. A target already diseased can not be the target of Locust Swarm.

Flurry of Blows: At 8th level, the Temple Guard may use the Flurry of Blows ability. After successfully striking an enemy that is diseased, you may instantly strike that enemy again for half damage. If you choose to use Flurry of Blows, you may not use Sweeping Strike.

Outbreak: At 9th level, Temple Guards gain the Outbreak passive ability. When a diseased enemy dies, roll a d20. On 11 and above, the disease spreads to all creatures within 10 yards, dealing 2d6 damage and diseasing them. On a 10 and below, there is no effect.

Locust Swarm R3: Beginning at 12th level, Locust Swarm now does 2d10 damage, and applies the Ancient Plague disease. A target already diseased can not be the target of Locust Swarm.

Cull the Weak: Beginning at 15th level, you may use the Cull the Weak ability. When used, for one round, you deal double damage to bloodied opponents.

Locust Swarm R4: Beginning at 17th level, Locust Swarm now does 3d12 damage, and applies the Ancient Plague disease. A target already diseased can not be the target of Locust Swarm.

Deathly Miasma: Beginning at 18th level, the Temple Guard may use the Deathly Miasma ability. Deathly Miasma instantly afflicts all targets within 10 yards with Blistering Wounds. This counts as a move action, and can only be used once per encounter.

Diabolical Smite: Beginning at 20th level, once per day, in the battle of your choosing, you may apply all three diseases to a single target of your choosing. This can only be used once a day. Outbreak cannot occur.

Ancient Plague: A target may become diseased with Ancient Plague by the Temple Guard. The diseased target has a -2 to AC and a -1 to all saving throws. A target is diseased for 4 rounds.

Blistering Wounds: A target may become diseased with Blistering Wounds by the Temple Guard. The diseased target takes 1d4 damage every round until the disease wears off. This damage increased by 1d4 every 4 levels, starting at level 4. A target is diseased for 4 rounds.

Temple Guard who multiclass may never again advance his level as Temple Guard but he retain all guard abilities.

Weapons: 2 Sickles, or a Halberd.

Religion: A Temple Guard is a follow of whatever god the town he was born in worships; Karadin are extremely religious, and the Temple Guard would be raised learning only about the town's god. Karadin usually choose to follow older gods, however very rarely will choose evil portfolios.

Other Classes: This class has a bit of a ego, thinking they are slightly better than those around them. The few times the Temple Guards are seen out of their towns are when they are on a pilgrimage, or a special assignment given to them by their gods. (You may meet a Temple Guard on the road, for instance, and if you are going to the same place he could possibly join you.)

Combat: The role for a Temple Guard in combat is to enter the fray, deal a lot of damage, and take very little. They are not tanks. They can't take very many hits, so if you are playing a Temple Guard, be aware of yourself in combat.

Temple Guards in the World[edit]

These characters would fit in only in Karadin society, deep within the deserts of the world you are playing in. If your game does not have Karadin, it cannot have Temple Guards.

Daily Life: A Temple Guard would wake up early, and head to the local Chantry, where they would pray for hours before heading to the training grounds. There, they would practice their weaponry skills until late in the evening, where they would return to praying. Then they would go to sleep, and start the process anew. A Temple Guard on the road would not have such a life, and instead would try and fit in these activities where he/she could. For instance, A Temple Guard might say a prayer before battle, or before going to sleep that night.

Organizations: Temple Guards would congregate at the local Chantries that belong to their towns. Although Temple Guards are friendly to Temple Guards from another town and god, they do not often meet or pray together.

NPC Reactions: NPC's would be wary of the Temple Guard, if not only because they are a Karadin, but also the long Halberd on their back is a bit intimidating. NPC's would not be willing to open up as easily to a Temple Guard as they would to a Human.

Characters with ranks in Knowledge, Geography can research Temple Guards to learn more about them. When a character makes a skill check, read or paraphrase the following, including information from lower DCs.

Temple Guards in the Game[edit]

Temple Guards will fit into the game as a good, strong party member, or an NPC that strives to bring justice to the land.

Adaptation: A possible variant could be a Sinister Temple Guard, which is pretty much a Temple Guard with focus in spells and diseases, that would use an Evil Portfolio.

Sample Encounter: A possible encounter could be in a Karadin town in the desert. If you begin attacking the Chantry there, expect many Temple Guards to come attack you.